11 Must-See Recruitment Research Findings and What They Mean For YOU! 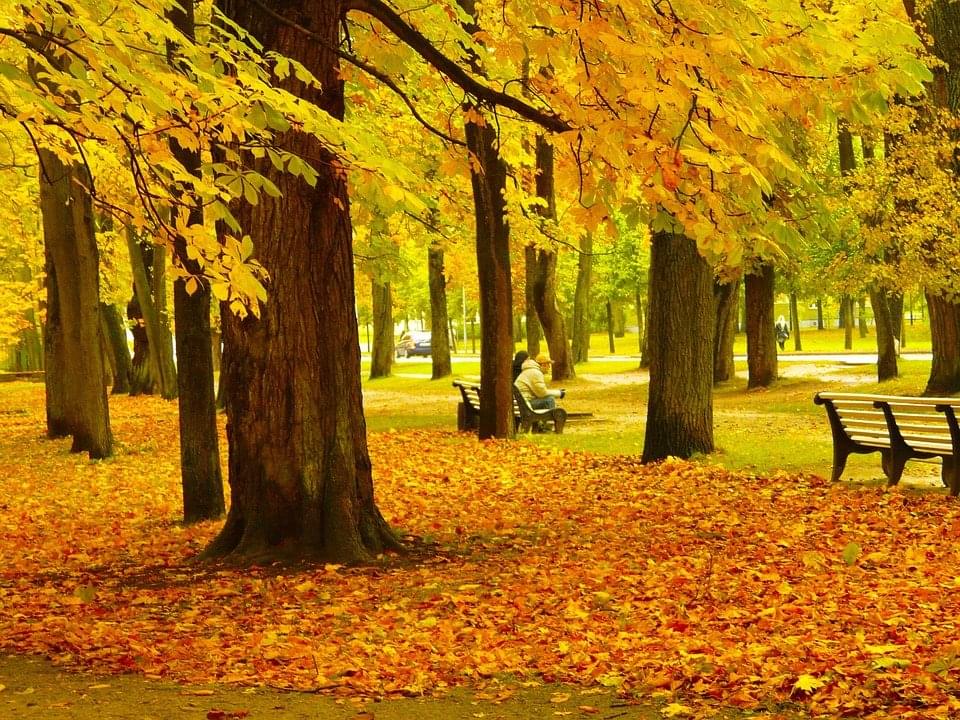 We LOVE this time of year. Yes, it can be cold and rainy out there, but the start of the autumn/fall usually signals the release of the industry’s best new studies and with them, some intriguing new findings and insights. And this year is no exception!

Just last week, Lever, the recruiting software for more than 1,000 fast-growing companies around the world (including Netflix, Lyft, Eventbrite and Shopify), unveiled their latest report which examines sourcing and hiring data over a 12-month period encompassing more than 4 million candidate considerations. It explores key recruiting metrics by company size, role, and candidate origin that relate to the hiring process, the interviewing process, and time to hire, and today we’ll be taking you through the main findings and what they mean for you.

According to Lever’s findings, on average, across all company sizes (small, medium and large) only 1 in every 100 candidates is actually hired. Larger companies (because the are generally more well-known) will usually have an even larger number of candidates to sort through before they make a single hire:

Candidates per hire by company size 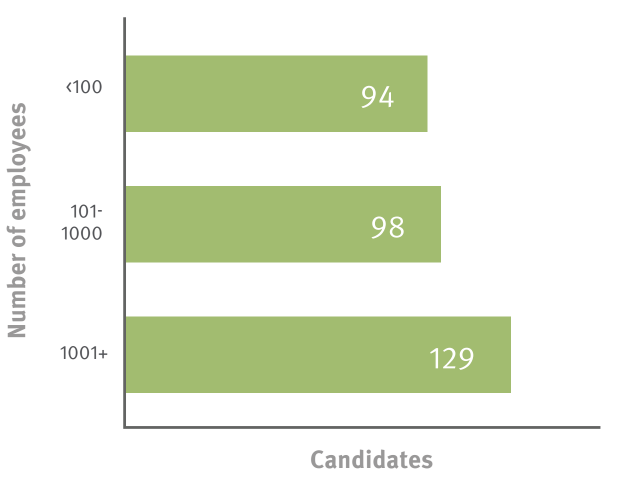 However, the odds vary dramatically between candidates who are referred to the company (one in 16), submitted by an agency (one in 22), proactively sourced (one in 72) or apply via a company’s careers site or job postings (one in 152). For companies of all sizes, direct applicants are the largest source of hire, followed by pro-active sourcing and then employee referrals. However, while direct applicants represent the biggest source of hire, only 1 in 152 direct applicants are actually successful. Whereas, even though employee referrals represent just 16% of total hires, they are 10 times more likely to be hired (1 in 16):

Candidates per hire by origin 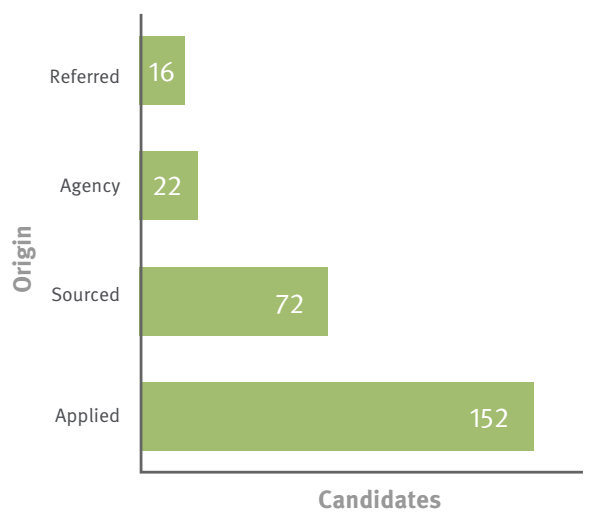 It is, therefore unsurprising to hear that direct applicants also represent the largest percentage of under qualified candidates. On average, 52% of applicants are deemed underqualified by recruiters:

Percentage of underqualified candidates by origin 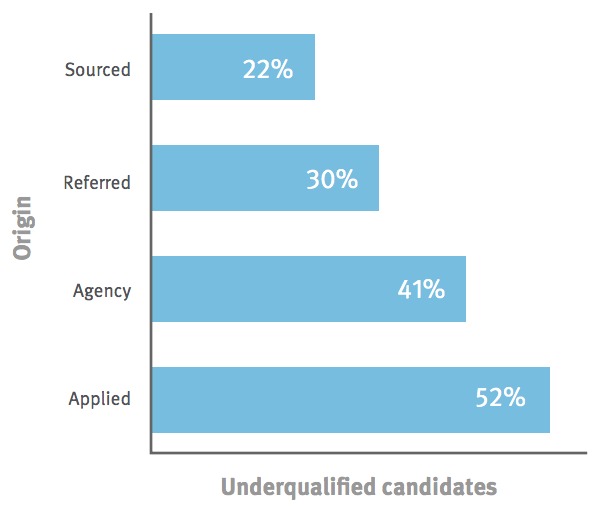 What is surprising to hear is that 22% of pro-actively sourced candidates are also deemed underqualified and therefore, unsuitable. And while this is the lowest rate of any hire origin, it’s still considerably high considering recruiters have complete control over who they source.

When Lever broke down the origin of every 100 hires by role, it became clear that not every candidate pool is created equal. For those of you who are tech recruiters, it’s interesting to note that Engineers are the most likely to come in via an agency (5%) and second most likely to be sourced (37%). They are the least likely to be applicants – just 38% of hires apply. Whereas, those of you who recruit for Operations professionals should note that these professionals are the least likely to come via an agency, an employee reference or indeed sourcing. The vast majority of these hires apply.

Origin of every 100 hires by role 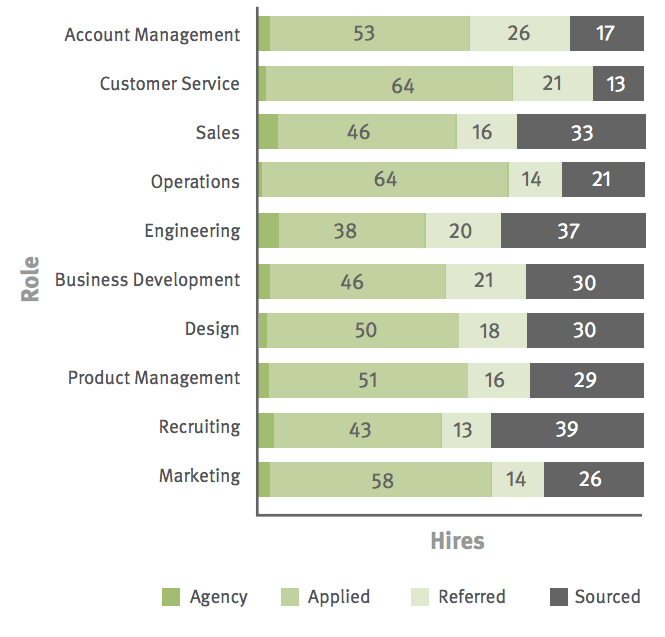 Given the relative efficiency of hiring referred candidates, now’s the time to really invest in your employee referral program. We detailed 5 Key Ingredients for a Successful Employee Referral Programme a couple of months ago, so dive in and ensure that yours is on the right track.

If over half the applicants our job advertising efforts are attracting are considered “underqualified”, it’s time we took a long hard look at the way we write our job ads as they’re clearly not attracting the candidates we need or want. Creating and publishing job ads is a core component of what recruiters do, so it’s an essential part of your recruitment process to get it right. Our exclusive eBook, The Ultimate Sourcing Ninja Guide to Job Advertising, covers the 5 essential steps to take when writing great job ads, a complete recruitment SEO guide for how to get your job ads on page one of Google, and a step-by-step on how to promote your job ads effectively on various social channels including LinkedIn and Twitter. Download it now to brush up on your writing skills.

It’s simply not acceptable that actively sourced candidates should be considered “underqualified”. You have complete control over which candidates you select to present to the hiring manager, so none of them should be considered unsuitable to progress in the process, never mind 22%! So, next time, before you start constructing your search, STOP! You could be making one of these 5 mistakes.

Successful candidates go through an average of 4 interviews on their way to being hired. However, the number of interviews conducted depends very heavily on the number of applicants applying for a position. Roles with the lowest candidate to hire ratio (Account Management, Customer Service, Operations, and Sales) put successful hires through fewer interviews, while roles with the highest candidate to hire ratio (like Marketing and Product Management) interview successful hires more times on average. For example, Marketing candidates can do up to 6 interviews before being offered the role:

Average number of interviews by role 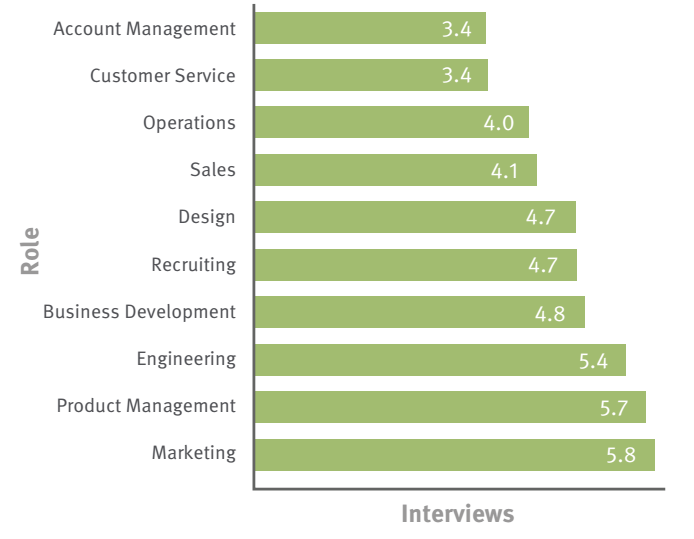 The average candidate spends a total of 3 hours and 44 minutes in the interviewing chair. As you would expect, even though candidates for technical roles do fewer interviews, they spend the longest amount of time being interviewed. These prolonged interview times are usually down to the skill assessment and aptitude tests associated with these types of roles: 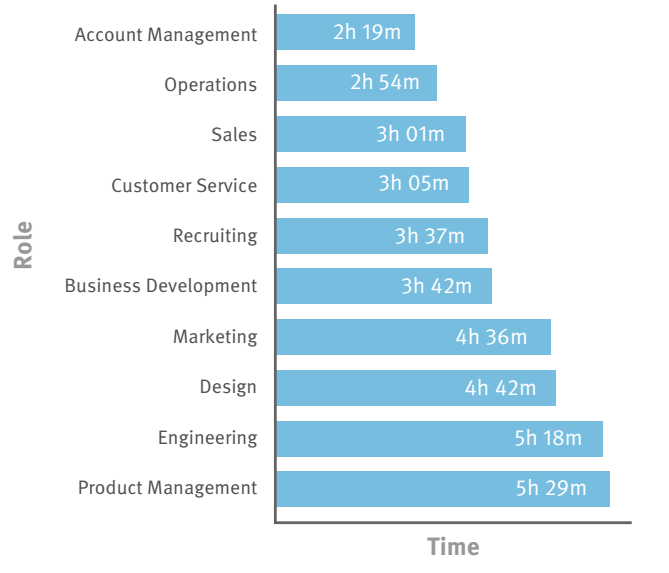 The average company has 9 pipeline stages associated with their interview process – that’s 9 stages candidates have to pass through in order to be made an offer. In addition to the three built-in stages of the recruitment process (newly sourced lead, new applicant and offer) other stages commonly added to the process include:

In some cases, up to 20 different pipeline stages were identified in just one company.

I don’t know about you, but we were rather shocked to discover that so many candidates were being put through such a lengthy interview process. In fact, we wondered just what was being asked of those candidates during that time and what was actually being achieved in each of these different interviews. According to John Vlastelica, the founder of Recruiting Toolbox (and the presenter of our “Black Belt in Predicting Success: Interviewer Training“), in order to predict whether or not a candidate will be successful in their role with your company (i.e. the purpose of a job interview), great interviewers use two, very specific tactics. Neither of which should take that long to undertake.

From start to finish (e.g. from when the candidates first enters your pipeline to when they’re hired), the average time to hire is just over one month (34 days). However, in larger companies (those with over 100 employees) it can take up to 41 days. 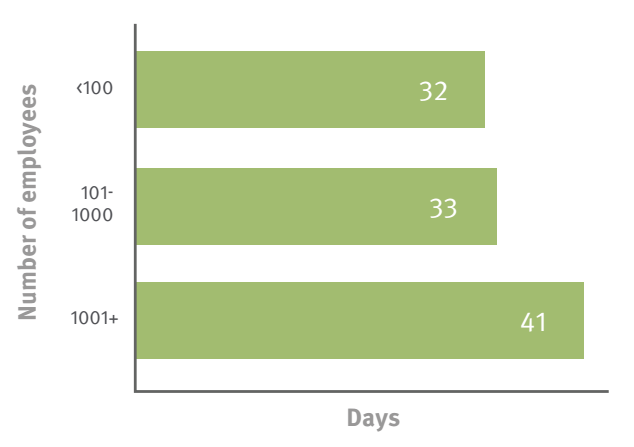 Median time to hire by role 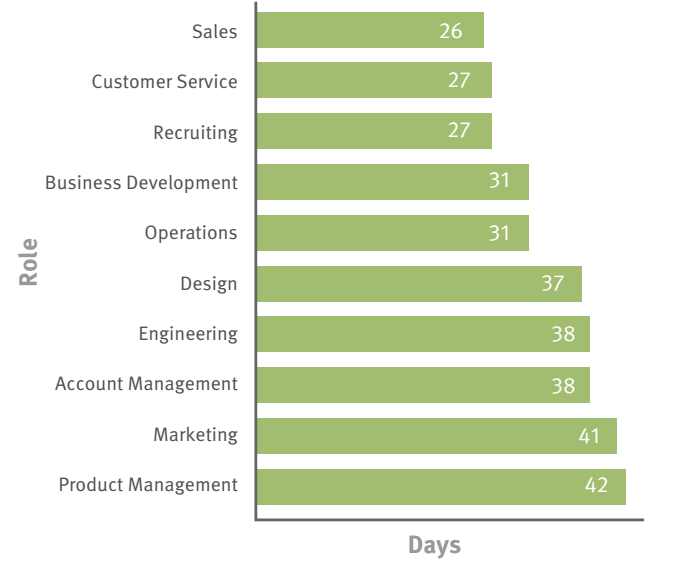 While they don’t account for a large percentage of the hires in Lever’s sample, it is very interesting to note that candidates who are hired via agencies tend to have a shorter time to hire than those hired via other sources:

Median time to hire by origin 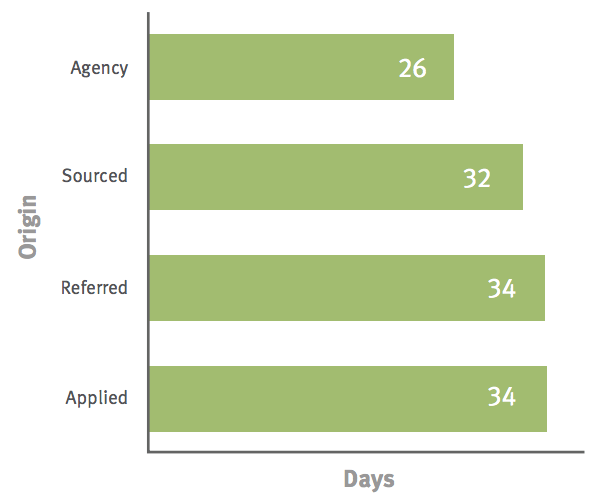 How to spot a retention problem before it's…

When people start handing in their notice, your business has a problem. Not…