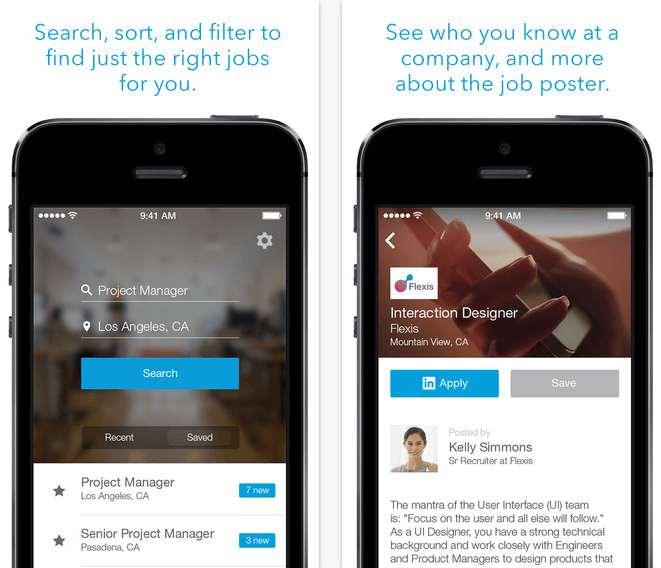 According to LinkedIn, the new app will help job seekers speed up their job hunt with:

The app also offers job seekers total privacy, so their network won’t know they’re looking for a new role if they don’t wish them too. 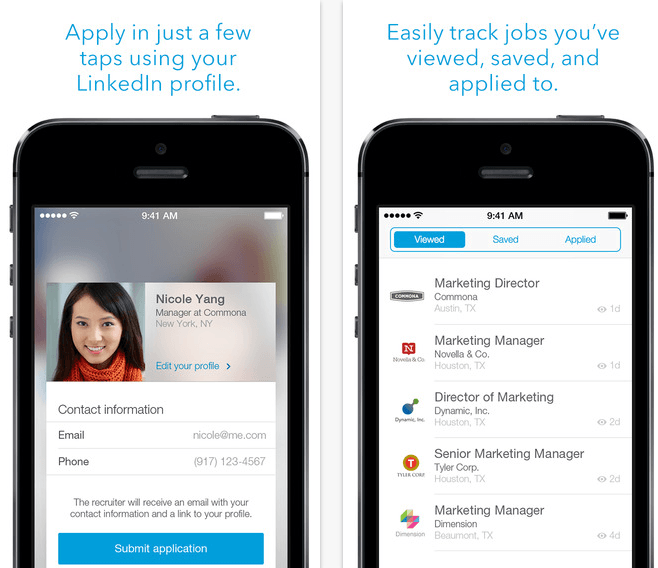 You and your clients can download the app here.

It was only last week we were saying that native video would be here a lot sooner than we all anticipated. Last Tuesday, Twitter began rolling out their brand new video feature to all users. Yes, in addition to gifs, Vines and audio files, very soon every Twitter user will have the ability to seamlessly capture, edit and share videos right from the Twitter app too.

The new mobile video camera and editing features are simple to use – a few taps is all it takes to add up to 30 seconds of video to your 140 statement – and playing videos is just a s simple. Videos are previewed with a thumbnail and you can play them with just on tap. Twitter for iPhone users will also be able to upload videos from their camera roll as well (a feature that will be available on our Android app soon).

Twitter say they will be rolling these features out to all users in the coming weeks, but starting now, you’ll be able to participate in group conversations other people start with you, and watch any of the public videos users post. Like this one, the first Tweet using the mobile video camera, from actor Neil Patrick Harris:

Check out my Twitter video #Oscar exclusive! I gots me a scoop! pic.twitter.com/SGQ3oJHDqZ

Get Ready for SnapChat Discover (Your New Social Recruiting Weapon) 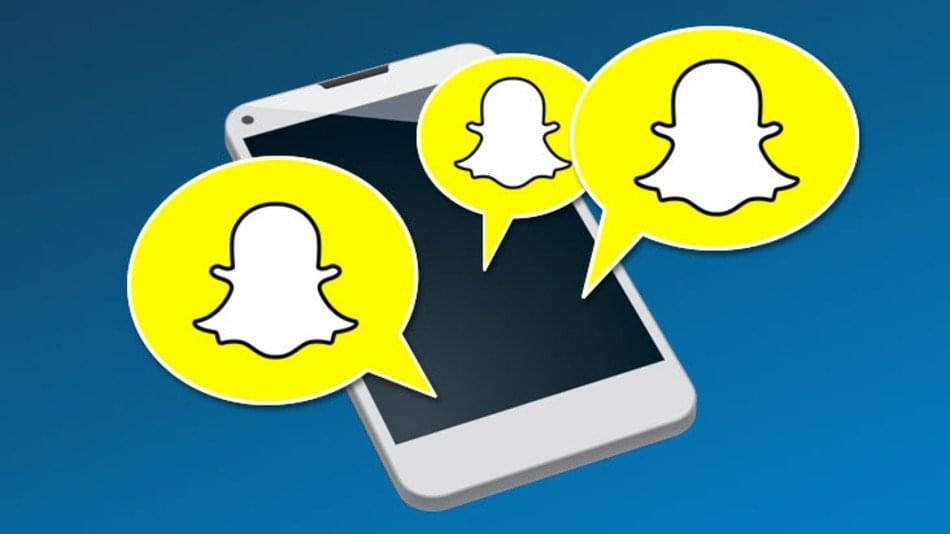 For the uninitiated, SnapChat is a photo messaging app that users can take photos, record videos, add text and drawings, and send them to a controlled list of recipients. Users can set these Snaps to adhere to a time limit for how long recipients can view their Snaps for (1-10 seconds), after which they will be hidden from the recipients’s device and deleted from SnapChat’s servers.

SnapChat ’Discover’ is a brand new addition to the medium that allows media companies (including ESPN, CNN, the Daily Mail, Cosmopolitan, Vice and Warner Music) to publish news and content from major publishers. And, staying true to the app’s ephemeral nature, that media content disappears after 24 hours.

At first glance, this seems like a strange move for Snapchat. A messaging app turned media publisher? How could that work? But if you think about it, Snapchat is now offering publishers (and hopefully recruiters in future!) a direct line into the minds of an audience that is very difficult to tap into these days – Millennials. Each partner currently publishes a batch of content called a “daily edition,” averaging between 5 and 10 stories. Snapchat is not currently requiring companies pay to feature content in the app. Instead, partners are selling ad space that runs alongside their content.


We believe Discover’ could very well be the most significant addition to Snapchat since cofounders Evan Spiegel and Bobby Murphy released the app in July 2011, not just for the publishers involved now, but for recruiters in the future. Because while the feature’s content and ads can only currently target users by country, in future we believe you will have the ability to very selectively target the audience you wish to engage with your content via SnapChat – and offer a previously hard-to-reach target audience (Millennials) the opportunity to interact with your employer brand in a medium that they’re very comfortable with. SnapChat recruiting may even become a specific recruiting function if activity at the Daily Mail is anything to go by – the publisher already has four employees solely dedicated to repackaging content for Snapchat users. We’ll just have to watch this space!

NEW! Use Direct Messages on Twitter to Speak Privately with up to 20 People

That’s right folks! Those clever-clogs over at Twitter have been busy bees this week. Not only have they added a brand new video feature to the platform, but they’ve also decided to upgrade their DM offering and make it so that the likes of you and me can now converse with a group privately. Conversations on Twitter have always been a largely public affair. But while you may prefer to read (or now watch) tweets in a public forum, you may wish to talk about them in a smaller, more quiet group. In the past, DM-ing was strictly a two person affair and both parties needed to follow one another in order to converse, but the new group function lets you start conversations with any of your followers and they don’t all need to follow one another in order to chat. Groups can be created in just a few taps and, like WhatsApp, when you’re added to a group, you’ll get a notification. Easy peesy!  Watch the video below to see the feature in action:

Like us, Rapportive users have not been happy about the email plug-in’s performance and changes following its acquisition by LinkedIn back in July. Instead of rich contact info and tools for following and friending email contacts on a variety of social networks, LinkedIn removed much of the functionality that drew users to it in the first place. In the wake of these changes, a number of competitors stepped in to make a land grab for disenfranchised Rapportive users.  But last month, contact management company FullContact, a contact management software and API service, annonced it was entering the space, with its own take on a better email plug-in for contacts, via its newly launched tool FullContact for Gmail. 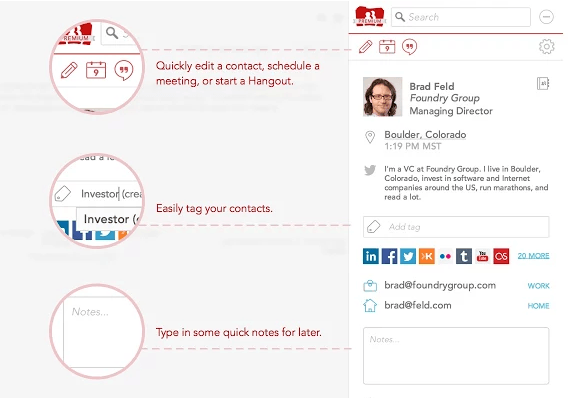 Like Rapportive, once installed, FullContact for Gmail users will be able to hover over or type in a new email address in order to see detailed contact information in the Gmail sidebar, including things like their name, location, title and company, email address, links to social networks, as well as their recent tweets, Facebook and Instagram posts. However, FullContact’s version goes a step further than the old Rapportive did by offering company information, too. By switching over to the Company tab, you’ll be able to see things like the company size, its founding date, address, phone number and more ‚¬€œ all of which is powered by FullContact’s Company API. 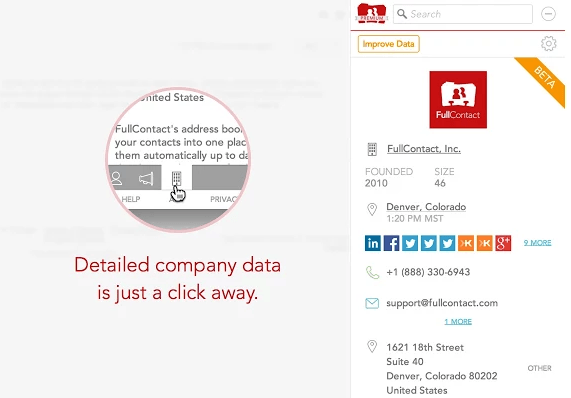 After installing the extension for the first time, Gmail users are prompted to either sign up or sign into FullContact using their Google account information. After doing so, contact details will be available in the right sidebar in Gmail and in Gmail’s Contacts section. Above the contact’s personal information are buttons that allow you to quickly add them to your Gmail contacts, create a calendar invite for a meeting with them, or even kick off a Google Hangout.

These features arguably make the FullContact plug-in more useful than Rapportive ‚¬€œ either before or after its acquisition. For those who need to catalog their contacts in even more detail, FullContact’s plug-in additionally supports adding notes to each contact and adding your own tags. These notes and edits are synced along with your contact information to FullContact. On the company website, you can take further action on your Contact list, including managing tags and de-duplicating your contact list, or, with a premium plan, even turn business cards into contacts. Suck on that Rapportive!

FullContact’s Gmail extension is free to download here on the Chrome Web Store.