6 Things: You Need To Know About Sourcing This Week

For the first time Twitter users will finally be able to include pictures and photos in their direct messages.

Twitter named the top Tech Company to work for in 2013′

At this year’s Glassdoor 2014 Employees’ Choice Awards, Glassdoor members in the Employees Choice Award Category voted Twitter the top Tech Company to work for in 2014. This is a highly impressive accolade but especially when you consider the results were based on employee feedback shared on Glassdoor via an online survey. One employee summed up the her experience with the company in one senetence: “#Amazing since day one”. Also included in the Top 5 were LinkedIn, Facebook, Bain & Co and Eastman Chemical.

Last Thursday LinkedIn began rolling out a newly redesigned inbox to all English speaking members (other languages to follow in the New Year). The new layout promises to make the navigation of the inbox easier which in turn will help you better “manage and build your professional relationships on LinkedIn”.  The redesign includes: 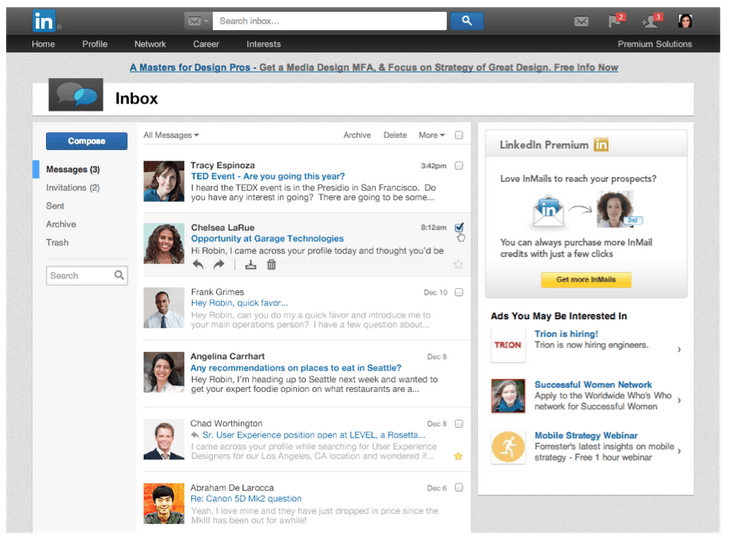 LinkedIn have released their latest Talent Demand Index Report and this time it’s all about graduates with data gathered from all over Europe, the US and Australia.  In summary, in Europe the UK is over fished when it comes to grads but graduates from the University of Leeds, Newcastle, and Birmingham are relatively untapped, The Netherlands and France are good sources for grads and in the US, obvious markets like San Francisco, Houston TX and New York City are pretty mcuh tapped out, but LA, San Diego, Miami and Detroit remain under-utilised. In terms of graduate performance, the highest performing graduates were not from any one specific university, but in fact the highest in their class of any university.

The list included such business classics as Les Miserables and The Bible… What? Staying true to their cutting edge principles, they did actually mention some business books such as “The & Habits of Highly Effective People” and “How to Win Friends and Influence People”. Next year, it is rumoured that they might start considering books from the 21st Century!

**For more information on how to become a Sourcing Ninja, visit our training page.