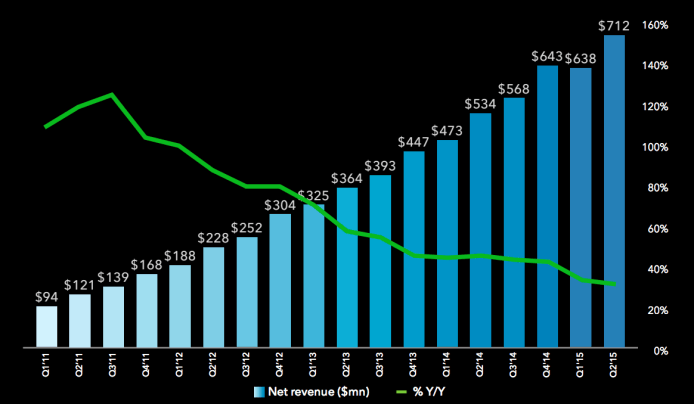 Thursday saw LinkedIn’s Q2 earnings beat analyst expectations in dramatic fashion, sending the stock up as much as 14% in extending trading.

The company says it’s expecting revenue between $745 million and $750 million in Q3, along with earnings of 42 cents per share. An expectation analysts are happy to go with.

The company has been actively building new areas of its business to help it grow beyond its usual premium subscriptions and recruiting services. Most recently, it acquired Lynda.com, an online education site, for $1.5 billion, and earlier this month, LinkedIn started adding paid tools for marketers focused on lead generation in SlideShare, the company’s first paid product within the service. LinkedIn CFO, Steve Sordello, and CEO, Jeff Weiner, also both said that LinkedIn was preparing improvements and new products to its recruitment and hiring segments that will be rolled out in October.

No details were included in the financial report, but Weiner offered some hints during the Q&A conference call with analysts. He said an improved recruiter search tool will more precisely surface relevant candidates. It will “take it to a new level,” he said. Also in the works are refinements to the job and candidate referral. 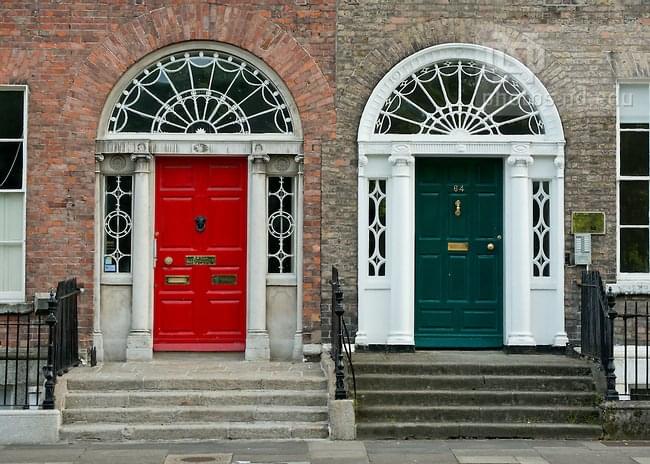 The findings from LinkedIn’s latest research study, suggests that if you care about your employer brand – what people think working at your company is like – you should REALLY care about your job postings. Particularly those on LinkedIn.

According to the survey findings, 75% of professionals use LinkedIn to find a new position when they are considering switching jobs, and the most common way those people first interact with a company is through a job posting. That means your job postings are your doorways to your employer brand, as only after a candidate sees the posting will they research the rest of your company.

The illustration below shows the typical journey a candidate takes, with the job posting coming first: 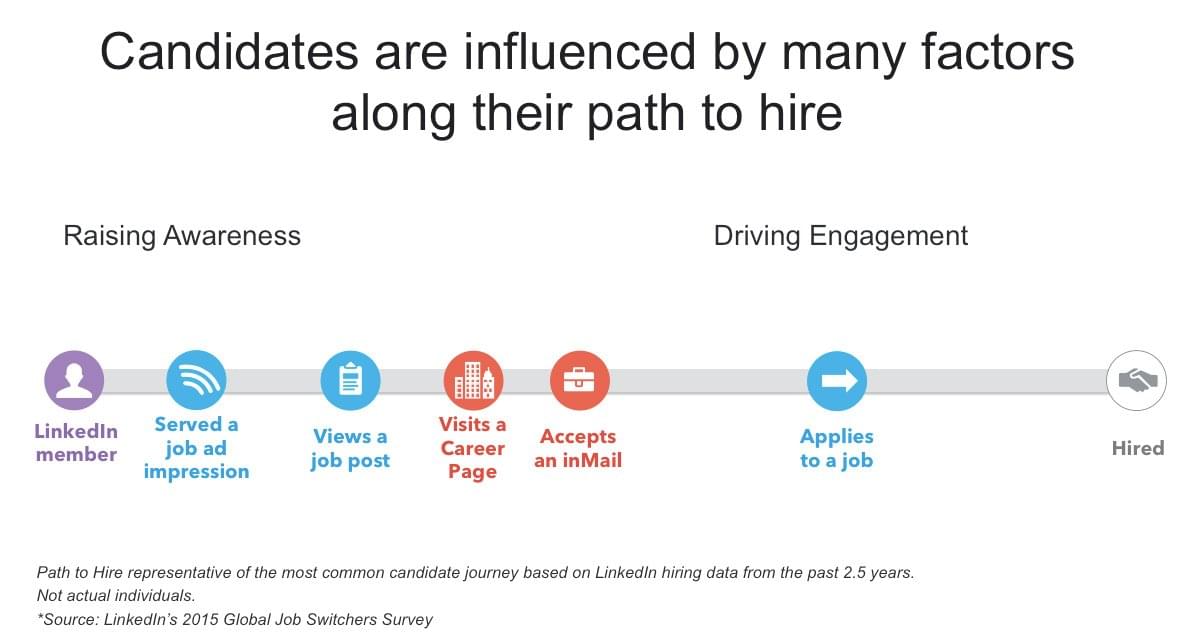 The fact your job postings are the entryway for most candidates into your employer brand is a critical piece of knowledge that presents a great opportunity for you as a recruiter. After all, 99% of job descriptions are the boring list of requirements we’re all used to, so if you do something unique you can really stand out.

So take your time and make them as creative and as findable as you can, particularly if you care about your employer brand. Because, ultimately, that’s generally a candidate’s first – and often only – view into how your company is as an employer.

Check out our “Ultimate Sourcing Ninja Guide to: Job Advertising” here for some invaluable tips on how to create killer job ads.

The Tech Partnership is imploring employers to help create a “digital lexicon” to improve the number of graduate candidates. The network of tech employers fears that good candidates don’t apply for jobs because they are stumped by tricky industry jargon.

The goal of the new digital lexicon is to make it easier to understand what different jobs descriptions mean. By doing that, The Tech Partnership hopes to boost the number of graduates applying for jobs as the candidates can more easily compare their skills and strengths against the job descriptions.

Tech Partnership is a network of employers that aims to create the skills needed to grow the global digital economy. Founding members include Cisco, CapGemini, IBM and National Grid.

Bob Clift is the Head of Higher Education at The Tech Partnership. He comments: “One of the challenges we have always faced is how to improve the flow of young people into tech careers. If we, as a sector, were to present a simpler picture of the range of jobs most typically available through apprenticeships and graduate entry, then hopefully it will make a positive difference to future recruitment.”

The Tech Partnership has created a draft of the digital lexicon and urges employers to comment on and amend it. If you’re curious to read it, you can download it here.

Pinterest is Working with a Startup Called “Paradigm” to Foster Diversity

There’s no two ways about it. Diversity is a hot-button issue, and an issue that many tech companies can’t seem to figure out how to solve.

But that’s where Paradigm comes in. Paradigm works with fast-growing companies to help them identify where the biggest barriers to diversity are coming into play. It does this through both quantitative and qualitative analysis to identify potential patterns of biases and disparities. And last Thursday, Pinterest formally announced its new initiative in partnership with Paradigm called Inclusion Labs.

“Pinterest just laid out a road map for other tech companies to follow,” BuildUp co-founder Wayne Sutton says. “Their new diversity efforts add concrete goals plus accountability from leadership, throughout the entire organisation by setting an ambitious goal to hire and mentor to create a diverse workforce that will position Pinterest as a leader.”

As part of the initiative, Pinterest has set goals like increasing hiring rates for full-time engineering roles to 30% female, and interviewing at least one person from an underrepresented background and one woman every open leadership position. 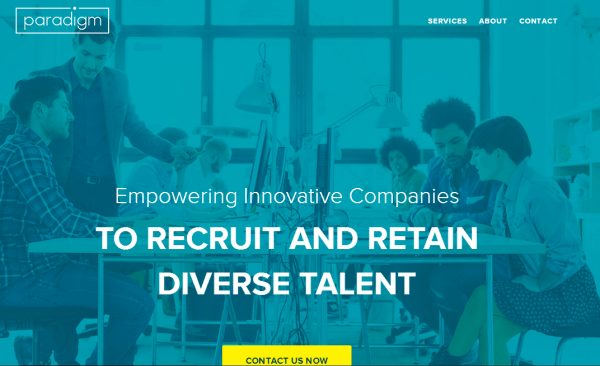 Pinterest intends to reach those goals with the help of Paradigm. Paradigm looks at things like how a company attracts potential candidates, who or what type of person generally receives good reviews in interviews, and the processes for giving promotions and determining compensation. The next step is designing strategies based on social science research to address those barriers.

At Pinterest, Paradigm Founder and CEO Joelle Emerson says Paradigm works cross-functionally, with key stakeholders in human resources, recruiting and even senior leadership. In 7 months, Paradigm has already affected aspects of Pinterest’s hiring process for engineers by convincing the company to get rid of “whiteboarding” in technical interviews.

Whiteboarding — standing up in front of a potential employer and writing code as quickly, accurately and concisely as you can — has become a fairly standard process for engineering interviews. But, Paradigm’s independent research and anecdotal evidence showed that whiteboarding is not a good strategy for finding qualified women to hire. Emerson says they found that women who perform on par with men in computer coding interviews are evaluated more poorly in whiteboarding interviews.

“So these are women who have proven their technical chops in computer coding, but just underperform in whiteboarding specifically,” Emerson says. Now, everyone has the option to code on their computer for the engineering interview at Pinterest. The next step, Emerson says, is measuring the impact and seeing if it has any positive results.

Paradigm also held a workshop for Pinterest’s senior leaders on unconscious bias. The workshop explored how they can minimise biases as individuals, as leaders of an organisation and in the structures and processes they use to develop the organisation.

If you’d like to follow Pinterest’s progress with Paradigm, just keep an eye on the company’s blog.

Rejoice! You’re About to Receive LESS Email from LinkedIn

Noticed less promotional LinkedIn emails in your inbox last week? That’s because LinkedIn has made the conscious decision to reduce the number of emails you receive from them from now on.

“For every 10 emails we used to send, we’ve removed 4 of them” LinkedIn said in a blog post last week, and as a result “member complaints have [already] been cut in half”.

How are they cutting down down? well, if you’re receiving too many invitations to connect, LinkedIn have begun to send a single weekly digest email in place of individual emails. They’ve also begun to aggregate the updates you receive from the LinkedIn Groups you’re a member of.

The company finished off their announcement by saying; “When it comes to your inbox, the message has been received: Less is more.”

Google Weans Itself Off Of Google+ 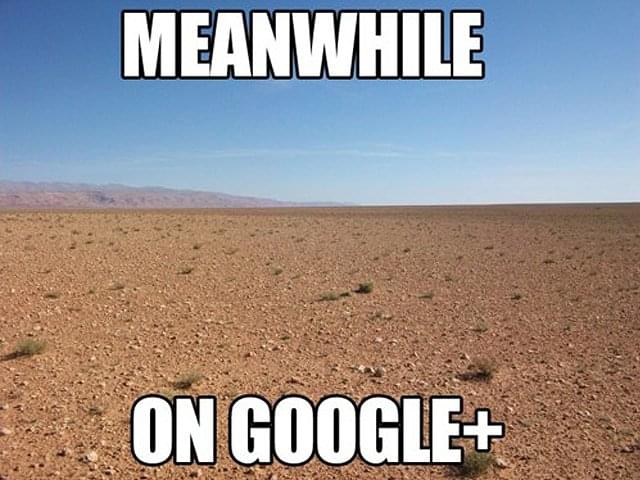 It’s no secret that Google+ didn’t quite work out or take off that way Google thought it would. It wasn’t for lack of trying! In fact, Google did everything they could to get us to love Google+ as much as they did by forcing us to set up Google+ accounts just to continue using our favourite Google products like YouTube, Photos and Streams.

But was announced last week that Google are finally admitting defeat and are starting to decouple Google+ profiles from its regular Google Accounts.

The first service that will be decoupled from Google+ is YouTube, which introduced Google+ comments back in 2013 in an effort to reduce trolling in its comments section. At the time, YouTube users were not amused. So they’ll be delighted to hear that in a few months from now, you won’t need a Google+ account to share YouTube videos, comment or do anything else on the site, really. And users who have linked their Google+ accounts to YouTube will also be able to remove their Google+ profiles from the service in the near future.

Google VP of Streams, Photos and Sharing, Bradley Horowitz, also announced last week that the company will continue to move some features out of Google+. The focus of Google+ — which still isn’t quite dead — will be on “becoming a place where people engage around their shared interests, with the content and people who inspire them.” That means Google will focus on features like Google+ Collections and move location-sharing to tools like Hangouts, where they, according to Horowitz, “really belong”.

While it’s clear from this update that Google+ will continue to live, and as Horowitz argues, Google will continue to give the service more focus, it’s hard not to look at this news and think that the company isn’t indeed slowly giving up on it.

After throughly enjoying both their Dublin and London events last month, we’re delighted to be able to say that TheJobPost has received a £250,000 grant from Innovate UK to help improve their recruiter matching service even further.

For those of you who don’t know, the online job platform specialises in connecting employers with the right recruiters. “[The funding] will allow us to invest further to further scale our ‘recruiter matcher’ tool.” said Ken Brotherston, Chairman at TheJobPost. “The tool allows an employer to identify and engage with relevant, specialist recruiters much more rapidly than ever before.”

Brotherston has revealed that TheJobPost will improve that concept with the new round of investment. The goal is to allow employers to find the right recruiter, regardless of the company’s size.

Brotherston says: “The benefit for recruiters is the ability to engage with an employer at their point of requirement i.e. to not continually have to make cold calls to establish if they have any jobs and regardless of whether they are on a PSL or not.”

The company has previously received a £100,000 grant from Innovate UK, and Marc Williams COO and Head of Product Development at TheJobPost says, “We’re delighted to get this further recognition for our technology platform that we believe will truly make engaging with specialist recruiters far more efficient than any other process.”

Glassdoor is debuting a newly designed Employer Center, which reorganizes tabs to help employers drill down to the metrics that matter most for them.

To date, more than 36,000 employers have a Glassdoor Free Employer Account, giving them access to company specific analytics & the opportunity to respond to reviews left by employees and job seekers. With this new design, any employer can now find company-specific analytics alongside best practice eBooks, guides and webinars in one place, and all for free. Glassdoor says “For Glassdoor customers, we offer an even richer experience and a deeper dive on the analytics offered.”

We’ll keep you updated on this story as we discover more details.

Entering a period of growth is a double-edged sword. The success, whether product…