The Animal Employees You Wish You Were Responsible for Hiring!

Forget about trying to recruit human candidates, in today’s war for talent it’s best to think a little outside the box… and more into the kennel or the stable! Yes, today we’re paying hommage to the candidates you wish you were responsible for hiring – animal employees!

From geese that guard Chinese police stations to wine making goats in Napa Valley, animal employees are some of the most dedicated and hard-working employees of them all: 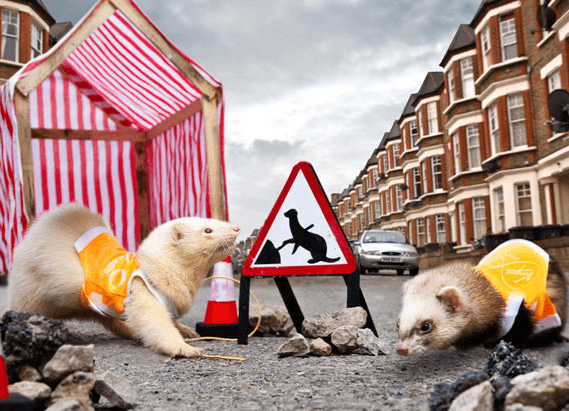 Ferrets naturally squeeze into the tightest spots. In nature, this ability allows them to pursue prey into burrows. In the working world, it means ferrets make great electricians.

In fact, according to Time magazine, in the 1940s, Freddie the ferret worked as an electrician’s assistant in Auckland, New Zealand, reported Time magazine. The lithe predator would wriggle through tight spaces, dragging a wire behind him. Freddie’s owner would hold a dead rabbit at the other end of the pipe to encourage the ferret to stay on the job. In one morning, the ferret could complete a job that would take a month for a human.

More recently, Virgin Media jokingly released a report that ferrets had been at work for years laying broadband cable for the company. The date of the report was April 1. 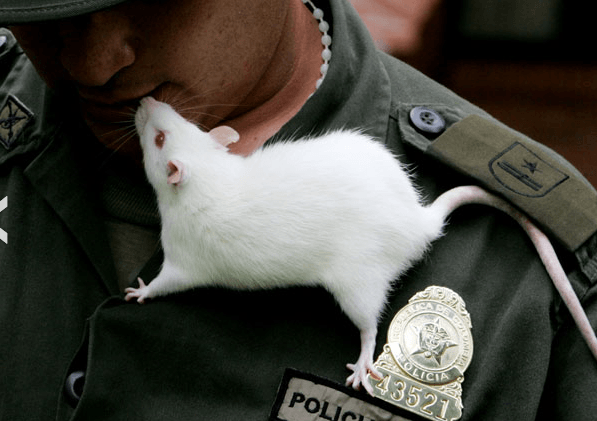 Rats have a serious image problem. But perhaps humans would think better of rats if they knew just how many lives the long-tailed lovelies saved each year.

In Colombia, decades of civil war peppered the countryside with land mines. The Colombian police trained common white lab rats to sniff our the deadly explosives with their sensitive noses. Rats weigh little, so they don’t trigger the land mines to explode. The mammalian minesweepers are also cheaper and faster to train than dogs. 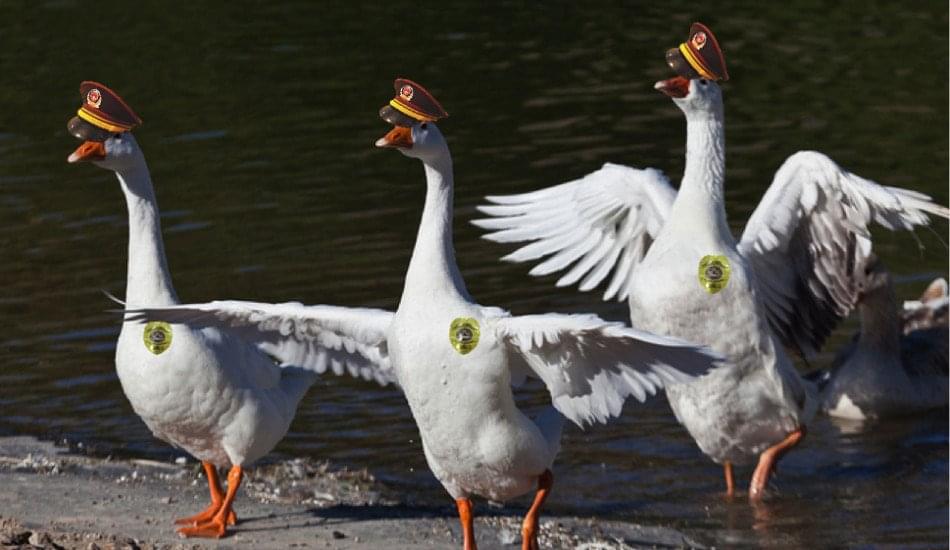 Officials in rural parts of the China’s Xinjiang province are using domesticated geese to aid in law enforcement. Apparently, the geese are more effective than dogs for a variety of reasons: They’re aggressive, have exceptional eyesight, and, as anyone who has had to deal with them knows, they’re loud and nothing can shut them up, SmartPlanet.com reported.

“Among all poultry, geese [are known] for being extremely vigilant and having excellent hearing,” said Zhang Quansheng, a police chief in Xinjiang’s Shawan county, according to the New York Daily News. “Geese are very brave. They spread their wings and will attack any strangers entering [someone’s] home.”

In one case, some of the crime-fighting geese helped nab a suspect who broke into a police headquarters, drugged the police dogs and stole a motorbike. The feathered crime-fighters apparently fanned their wings and shrieked until the duty officer awoke to apprehend the criminal, MSN Now reported.

But this isn’t the first time a country has employed geese to do its dirty work. Geese are also credited with helping Rome fight the Gaul invasion in 390 BC and, in 1986, the U.S. military employed 900 geese to guard military installations in West Germany, according to QZ.com. 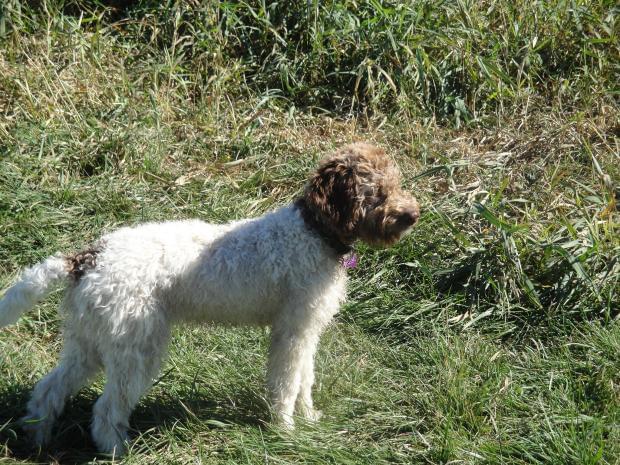 Dogs (and pigs) are actually trained to sniff out delicious truffles so we can enhance our foods with its flavour gourmet goodness. Lolo, an 8 month old Lagotto Romagnolo, works for Seattle-based Toil and Truffle sniffing out truffles that sell from between $1,500 to $4,000 a pound! 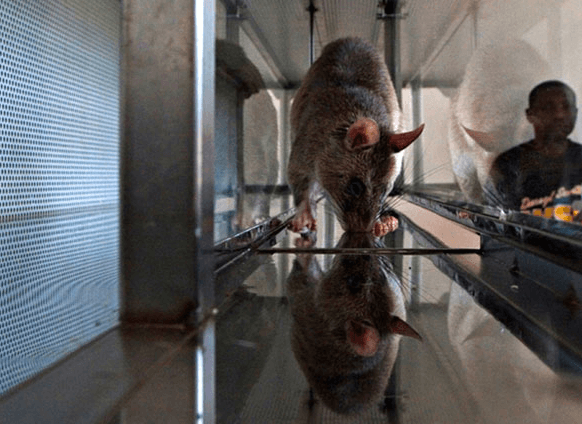 The young Gambian pouch rat (Cricetomys gambianus) in this photo, is learning to be a lab technician at Sokoine University for Agriculture in Morogoro, Tanzania. Human trainers teach the rats to identify samples of human spit infected with tuberculosis. So far APOPO’s operation in Morogoro, Tanzania has trained 54 rats that can each screen thousands of patients per month.

The training process starts with four-week-old rats and takes between six to twelve months to complete. 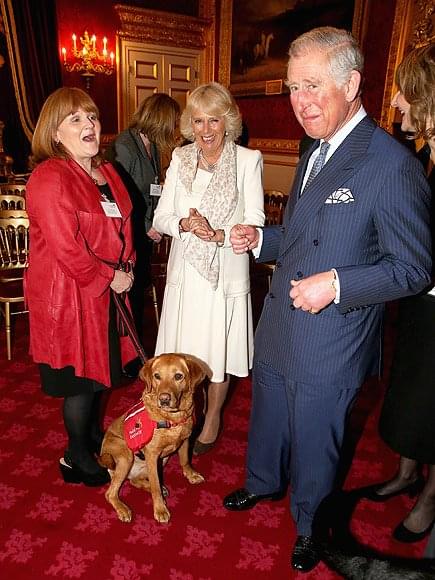 In fact, Daisy the cancer sniffing dog, has detected over 550 cases to date and has been honoured for her life-saving work with a Blue Cross Medal by Prince Charles. Since the Labrador was a puppy, she has been trained at the England-based charity Medical Detection Dogs to sniff out cancer and other fatal diseases in samples of breath, skin and urine.

A Japanese restaurant has changed the face of customer service by employing two monkeys to help with the table service. The Kayabukiya tavern, a traditional ‘sake house’ north of Tokyo has employed a pair of uniformed Japanese macaque called Yat-chan and Fuku-chan to serve patrons:

Twelve-year-old Yat-chan is the crowd-pleaser as he moves quickly between tables taking customer drink orders. The monkeys work in shifts of up to two hours a day due to Japanese animal rights regulations. But the owner is hoping to bring up the next generation of monkey waiters, and is already training three baby monkeys to work as waiters. 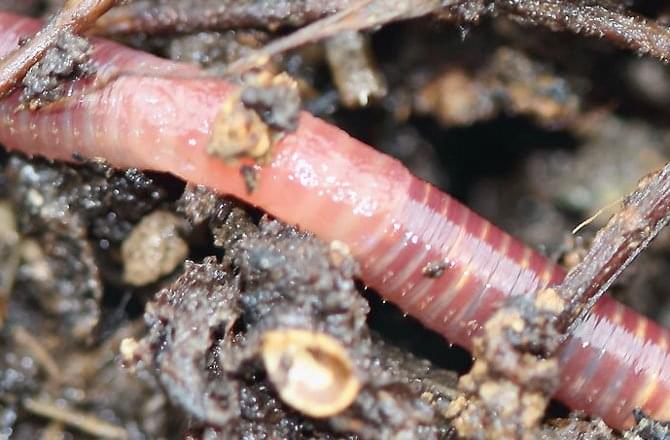 Lowly worms get stuck with one of humanity’s filthiest jobs, raw sewage treatment. Red worms (Eisenia fetida) devour human and animal feces, as well as winery, dairy and slaughterhouse wastes, in systems designed by New Zealand-based Biofiltro and other companies. The worms do the work 33 percent cheaper and with 80 percent less energy than conventional waste treatment systems, according to Biofiltro’s webpage. Then, once the sewage has in turn become worm waste, the worm’s excrement serves as rich, organic fertilizer.

Chileans originally developed the waste-to-worms system and the nation now uses worms to handle the waste of 250 people at Chile’s Antarctic air force base, reported the Otago Daily Times.

Researchers study marine animals in more ways than just watching them. Analysing the scat they leave behind can give them invaluable information about the animal’s genes, diet, and health. Tucker is a vital member of a scientific team at the Center for Conservation Biology, University of Washington:

His role involves sniffing out whale poop up to a mile away, so scientists can study the animals. One member of the team calls the feces “scientific gold” as a lot can de ascertained about animals regarding their species, diet, lifestyle, habits etc. Tucker was turned down for employment by law enforcement because he was too hyper, but life on a boat helps him focus on the job, because he’s afraid of the water! His team says that other dogs were distracted because they wanted to swim, but Tucker goes to work, then is rewarded with his favorite activity -playing with a ball.

Squirrels aren’t typically seen as spotlight-hoggers. In fact, they generally come off as pretty aloof and sometimes, downright rude. But not Twiggy. For her, showing off has led to great things. Her ability to water-ski has seen her featured in numerous blockbuster films including the popular comedies, Dodgeball and Anchorman: 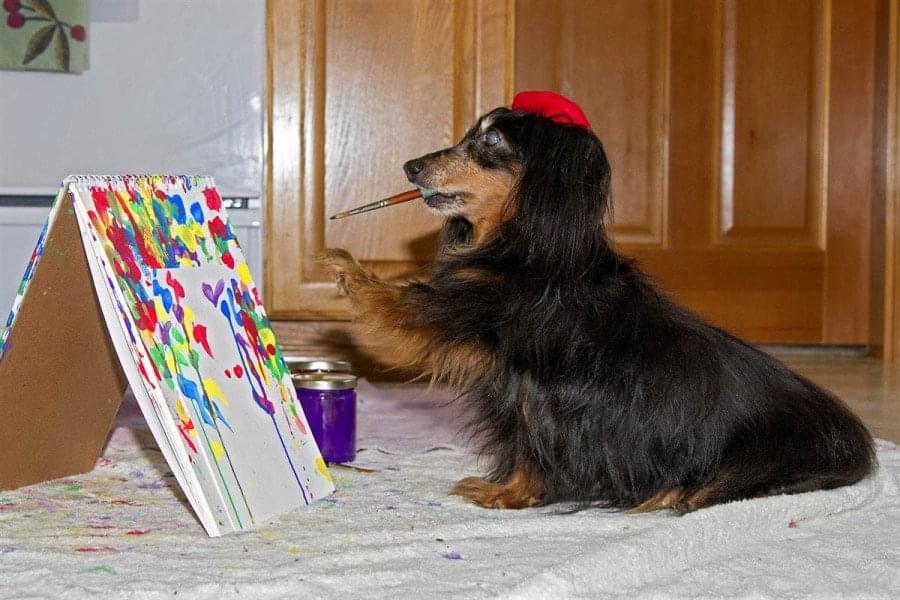 Hallie the Doxie was taught to paint by her artist human, Dee Dee, two months before she went blind. Even after Hallie went blind, she continued to paint! Hallie’s human told the Today Show that Hallie’s paintings have helped raise over $15,000 for the Purple Heart Rescue. Hallie’s not alone in her artist job, there are other dogs like her! In fact, Arbor a beautiful black lab, is another famous dogtist, with her highest sold painting raking in $453 with all the proceeds going to charity. 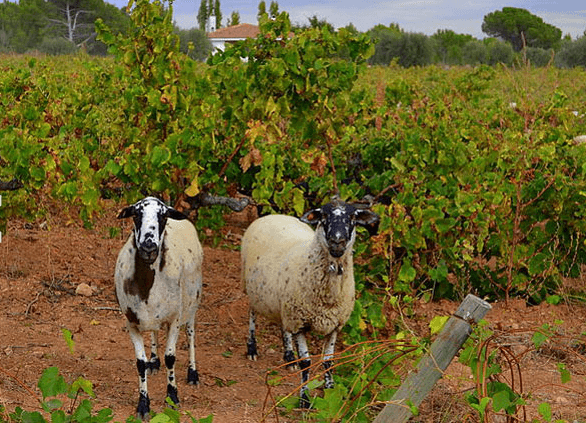 In misty Napa Valley, pruning off excess grape leaves prevents mildew from forming on the fruit. Human workers are expensive, and machines lack the finesse to prune without damaging the vines. Sheep can do the job quickly, plus they leave behind fertiliser. Win-win! 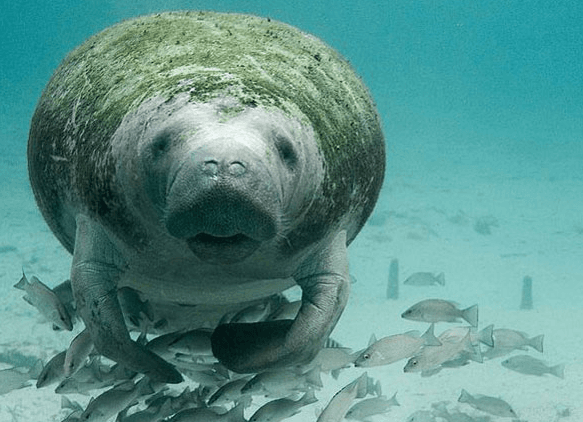 For over a century in Guyana, South America, the West Indian manatee (Trichechus manatus) has helped keep canals clear of aquatic weeds, according to a paper in the journal Irrigation and Drainage Systems. The animals grow to more than 12 feet long and can weigh over 1,000 pounds. The creatures have an appetite to match their size and can consume up to 10 percent of their body weight per day.

Even with their massive hunger for watery weeds, manatees might not be up to the job of keeping Florida’s waterways free of vegetation. A study in the Journal of Aquatic Plant Management suggested that the growth rate of the problematic plant hydrilla outpaces even hungry manatees’ appetites. 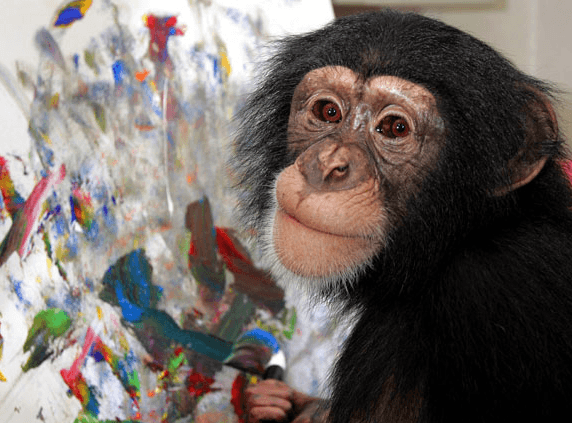 Pierre Brassau broke new ground in the art world of the 1960s. Critics hailed his work as a mixture of “powerful strokes” and “clear determination.” Brassau was an artist who painted with the “delicacy of a ballet dancer.” But Brassau held a terrible secret the critics didn’t know. Braussau was a chimpanzee named Peter! A Swedish journalist organized an art opening of the chimp’s masterpieces as a hoax to see if critics could tell the difference between avante-garde and ape art. The chimpanzee succeeded at a task many human artists find nearly impossible. He gained fame for his work while he was still alive. Chimp art flourished after Brassau opened the museum doors to apes. In 2004, Asuka, the chimp shown here, dazzled the art scene of Japan with her abstract pieces. She even had an art opening in Tokyo. 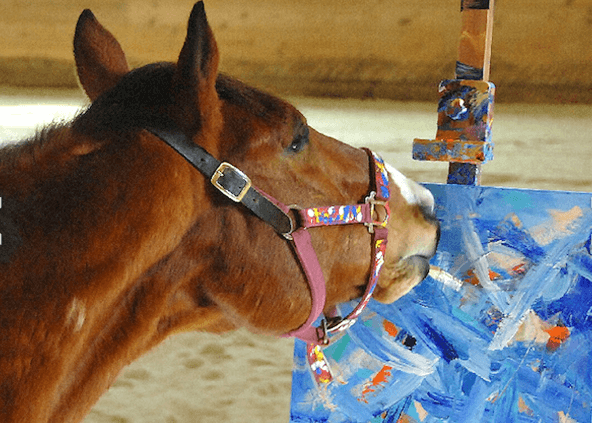 Art seems to be a popular way for retired animals to support themselves as Metro Meteor, a prize-winning race horse, took up painting after his knees gave out.

Now, the horse covers his feed bill with the sale of his wildly colourful abstract paintings that he produces with the help of his owners Ron and Wendy Krajewski.

Hallie the Doxie was taught to paint by her artist human, Dee Dee, two months before she went blind. Even after Hallie went blind, she continued to paint! Hallie’s human told the Today Show that Hallie’s paintings have helped raise over $15,000 for the Purple Heart Rescue. Hallie’s not alone in her artist job, there are other dogs like her! In fact, Arbor a beautiful black lab, is another famous dogtist, with her highest sold painting raking in $453 with all the proceeds going to charity.

In misty Napa Valley, pruning off excess grape leaves prevents mildew from forming on the fruit. Human workers are expensive, and machines lack the finesse to prune without damaging the vines. Sheep can do the job quickly, plus they leave behind fertiliser. Win-win!