Champions League Recruiting - Where Did We Lose The Run Of Ourselves?

This week saw the shifting of Europe’s footballing tectonic plates as both Real Madrid and Barcelona conceded 4 goals on German soil. You may have zero interest in watching overpaid prima donnas roll around in pretend agony every time someone looks at them sideways but stay with me awhile, I will get to recruitment! For the non-football fans, Real and Barca are the aristocrats of Europe and the rise of German teams is comparable to the marauding barbarians heading south in 410 AD. That is probably a bit harsh on the Germans as they have an impressive history in European competitions but have only won the Champions League 3 times in the last 30 years. The dominant force in recent times has been the Spanish, and seeing the top Spanish teams utterly dismantled was astonishing. 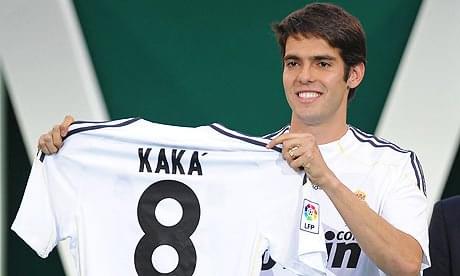 In June 2009, Real Madrid purchased KakÃƒ¡ from Milan for a fee of £56 million

So to the recruitment bit. The wage bill and value of the Dortmund team that crushed Madrid is a fraction of their Iberian counterparts. They are a team put together on a low(er) budget with a comparatively sensible approach to player wage structures. In 2002, the German football organisation restructured itself from the grassroots up to cultivate more homegrown talent and to put in place a system that would allow football clubs to operate on a sustainable basis. Their teams attract huge crowds, and ticket prices are kept affordable. To be fair, they have relatively affordable ticket prices in Spain too, but alas this is not the case in England, where ticket prices have been inflated dramatically as clubs struggle to pay for all of the Ferraris in the car park and are artificially buoyed by Saudi Oil Shiekhs or Russian Oligarchs.

The Dortmund team this week had 9 German players while Madrid sported just 3 Spaniards. This is not a nationalistic issue and as a national team, Spain have not suffered from having a lot of imports playing within their league. But in football, imports tend to be expensive. You have to compete for their signatures by paying massive transfer fees and then offer them huge salaries to keep them in the manner which is normally reserved for royalty. Ring any bells with recruiters trying to hire “big talents” for their teams?

All of this is driven by a group of football agents – the footballing equivalent of recruiters, these guys are not a much loved bunch and it is in their interest to keep their talent on the move as they receive a percentage of the transfer fees as their protÃƒ©gÃƒ©es move from club to club, driving fees and salaries through the roof and clubs further and further into debt.

The German clubs and Dutch sides like Ajax and PSV in the Netherlands spend much more time scouting for talent and creating youth academies for pipelining talent from a young age (that is not to say that they don’t sometimes splash some cash, but they balance their recruitment with a mix of scouting and the occasional big signing). Barcelona likewise have a more prudent policy than Madrid or some English clubs. Arguably the worlds best football player, Lionel Messi, arrived at Barcelona as a 13 year old protÃƒ©gÃƒ©.

The German clubs are still clubs – maintained as clubs and majority owned by the fans. Contrast this with Chelsea Football Club situated in an affluent area of London and owned and funded by a Russian oil billionaire who is currently rumoured to be preparing a ‚¬60 million bid for a new striker to offer an alternative to their current strike force for which they broke previous records to sign. I am not saying that money can’t buy you success, Chelsea won the Champions League last year but what I am saying is that you cannot build a financially viable and healthy fan-focused club based on rampant spending. The figures just don’t add up and it spoils the soul of the team.

So when the Germans recognised a decade ago that they needed to restructure and take a long-term view to compete at Europe’s top table, they did this based on attraction, identification and nurturing of talent and kept a cost base that was sustainable.

From a macro perspective, I think of Ireland as a whole. We have a two tier employment situation here: if you are unskilled or working in a dying sector like construction, there is little opportunity of you and your best option probably involves an airport. On the flip side of that, we have a massive employment shortage in the IT and Finance sector. We realise that we cannot fill all available jobs with homegrown talent. Obviously while the Germans were thinking about their football teams in the 2002, Ireland was not doing enough to educate and develop our workforce for the jobs of the future. Instead we got a collective passion for construction and created an unsustainable ponzi scheme. As with Chelsea Football Club, the figures eventually did not add up. Unfortunately for Ireland, we don’t have a Russian benefactor ready to prop up our ailing finances. Just some IMF suits with a bailout package and rough austerity measures.

From a micro perspective, within your own company you can do a Madrid, a Chelsea or a Manchester City and pay for all (or most) of your talent when they are at the peak of their powers and fork out the huge transfer costs and the fat agency fees that go with that process. Or you can do a Dortmund and improve your scouting/sourcing and at the very least reduce your exposure to excessive fees, but hopefully build a process that brings talent on from an earlier stage and develops them within your company by genuinely investing in them and their future. Their success will be yours. Messi has been with Barcelona for 13 years now, Ryan Giggs of Man Utd (which, under Alex Ferguson, has an admirable and successful development and player management system) has spent 20 years with the club. It seems that bringing on players from an early age within a club not only saves you money but also engenders loyalty and breeds success.

At Social Talent, we are not quite Google yet, but our recruitment policy is to take everyone on as interns for a number of months before permanently hiring them. We take on people that we recognise as having a spark and huge potential. In part we cannot afford to hire a 30-goals-per-season finished article, but we recognise in every member of our team their outstanding potential, and our hope is that we grow together and share our company’s success. Maybe we’re a bit wet behind the ears as an organisation to hold up as shining example of best recruitment practice, but our heart is more in the Dortmund model than the Chelsea one. I often wish we had reserves of cash so that we could grow more rapidly and hire legions of people, but part of me feels that we would leave something behind if we did that – hard lessons that we would miss and a spirit that we might lose.

Our model or the German footballing model is not the answer to everyones recruitment needs, but my argument is that throwing money at your recruitment needs is not the solution. More advertising, more agency fees, headhunters’ retained search costs and so on. STOP! Take a step back and think about your long term objectives as a company and start to grow your connections with your future Messi’s and Giggs’ – build talent communities, get involved with educational institutions and start scouting for talent. Okay, you can go again now and get over your short term hump by spending those fees but the best and most loyal staff that will make you more successful will be the ones that grow with you. Go find them or make it so that they find you and not your competition!