Everything You Need to Know About Social Sourcing in Asia

On a daily basis, internet usage in Asia ranges from a high of 6.2 hours in the Philippines to a low (but still high!) of 3.5 hours in both Japan and South Korea, and most countries are choosing to spend that time on social media. 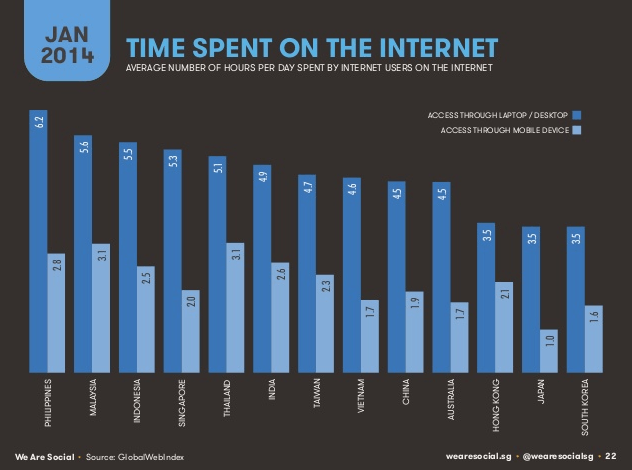 Of the 6.2 hours Filipinos spend on the internet every day, 4 hours is spent on social sites. Even Japan, who have the lowest internet usage percentages, choose to spend up to an hour a day on social sites.

The high internet penetration and social media usage mean it is essential for any Asian recruitment strategy to include a strong social element and we’re here to help you understand exactly which social sites are popular in which Asian countries and which job boards your job ads should be on in each region.

A whopping 98% of those surveyed said they have a social media account of one kind or another and 87% of them have used it within the last month. As you can see, there are no western social sites in mainland China. The social sites that are most popular are localised and China specific. Sina Weibo, the Chinese equivalent of Twitter, is the most popular site with 83% of people having an account. The site of x-ray searchable, but more on that in part two of our Sourcing in Asia series including how to tackle the almost exclusive use of mandarin on the site. 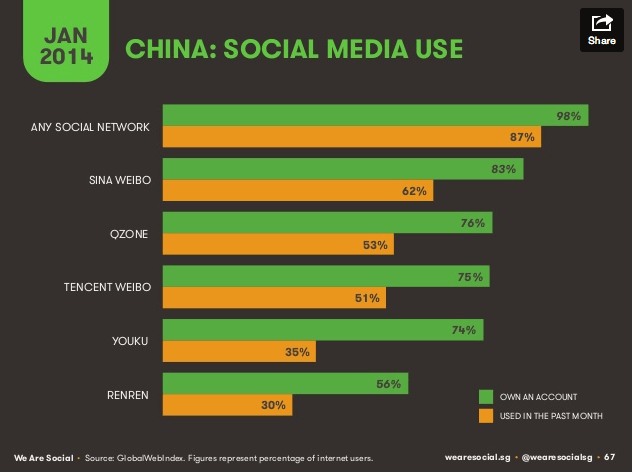 Job board wise the Chinese market is dominated by two big player: 51Job.com (which supports Boolean) and Zhoapin.com. These are the only two job sites you should attempt to place your job ads if searching for candidates within China. LinkedIn is only starting out in China. It has accumulated just over 5 million members to date, but the number is climbing steadily (this time last year the site had under a million members), particularly amongst white collar worker.

The “China outside of China” also has a very high social media penetration percentage with 96% of those surveyed saying they have some type of social profile, and 64% of them saying they have used it at least once in the past month. Unlike the rest of China, where western social media sites are blocked, citizens in Hong Kong are free to use sites that are more familiar to us in Europe and the United States. As a result, Facebook is the social platform of choice with 91% of survey takers admitting to owning an account and 53% saying they had used their account at least once that month. 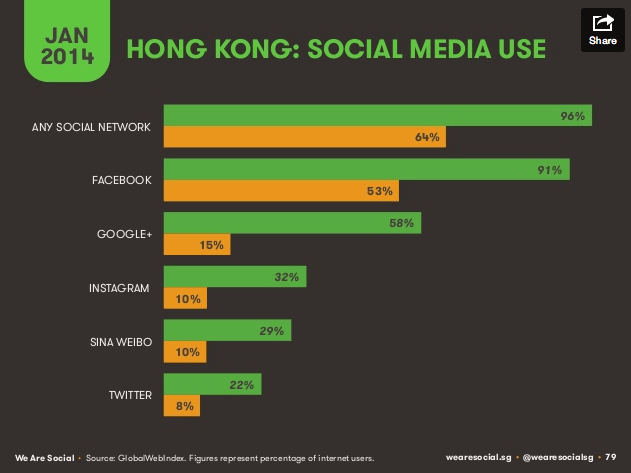 JobsDB.com are the most prolific job board in the market. To ignore it would be a huge mistake. Like in the rest of China, LinkedIn is still growing in Hong Kong. There are just 900,000 members currently frequenting the site but it is a resource to watch as the site has been gaining steady popularity over the last year or so.

Just like their Chinese counterparts, social media usage in India is high. 72% of people use a social network on a monthly basis. Once again, Facebook and Google+ dominate the scene, but Twitter and LinkedIn are both very strong social contenders with 30% and 24% monthly usage percentage rates respectively – a trend that’s very reminiscent of western markets. 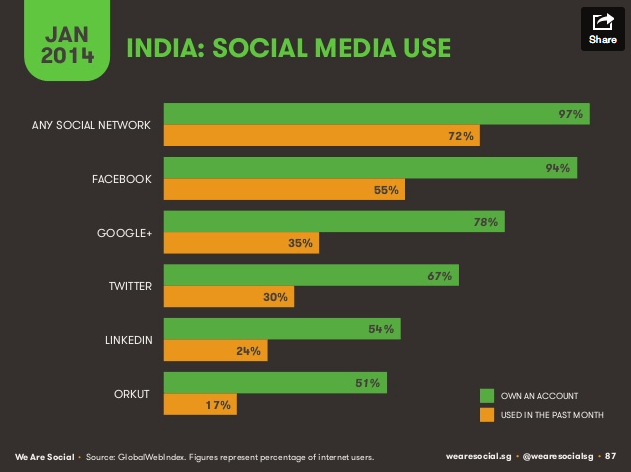 There are loads of job boards in India and they change depending on the region you’re recruiting within, but if you were to recruit nationally, Naukri.com and Monster India would be the boards to use. LinkedIn usage is huge. Of the 50 million Asian LinkedIn profiles, 27 million are Indian.

Japan is quite a different market to those we’ve seen so far. Just 42% of those surveyed said they use a social network on a monthly basis. That’s 18% lower than the lower than Hong Kong and the lowest percentage we’ll see in this summary. That said, Twitter is the country’s most popular platform and just over half (22%)of those who do interact with a social sites every month, choose to use Twitter. (For a guide on how to recruit candidates on Twitter see our ‘How to: Recruit on Twitter’ series.) Facebook comes a close second and local platform, Mixi, also makes an appearance. 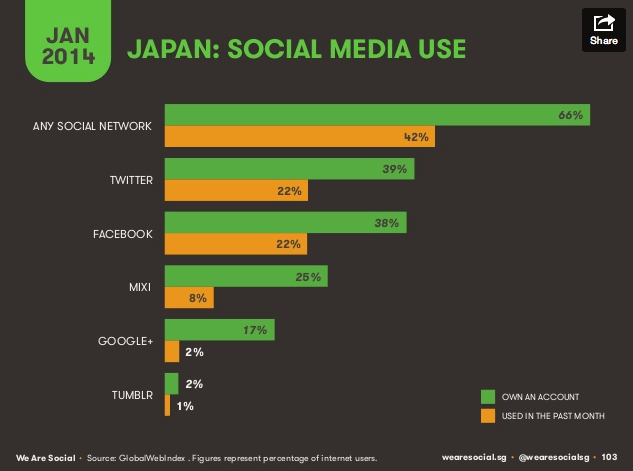 Rikunabi.com is the leading job board in Japan, but Indeed.com is growing in popularity amongst job seekers as is Mynavi Corporation. LinkedIn usage is quite low at 1.1 million members, but like China and Hong Kong membership and familiarity with the platform are still growing.

The country with the largest internet usage in Asia has an equally large social media usage. 98% have a social profile of one kind or another and 97% of them have a Facebook profile, making it the most popular social network in the country by a large margin. Twitter, like in the western world, is the second most popular site – 40% use it on a regular basis. It is also worth noting how popular LinkedIn is. 39% of those surveyed had a LinkedIn profile and a healthy 14% use it regularly. 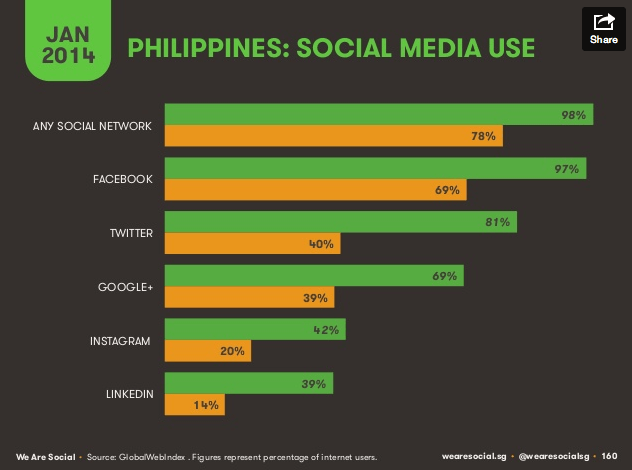 JobStreet.com and JobsDB.com are the top job boards to place your job ads on. In addition, OnlineJobs.com is an interesting site that is also popular in the region. 85,000 candidates are currently on the site and it can be searched for free in order to find IT workers or “virtual assistants” as they’re known. There are 2.5 million LinkedIn users.

Almost half of South Korea’s social account holders use their profiles every month. 75% of them choose Facebook, 56% choose Twitter and both western sites beat out local networks Me2Day and Nate Connect. 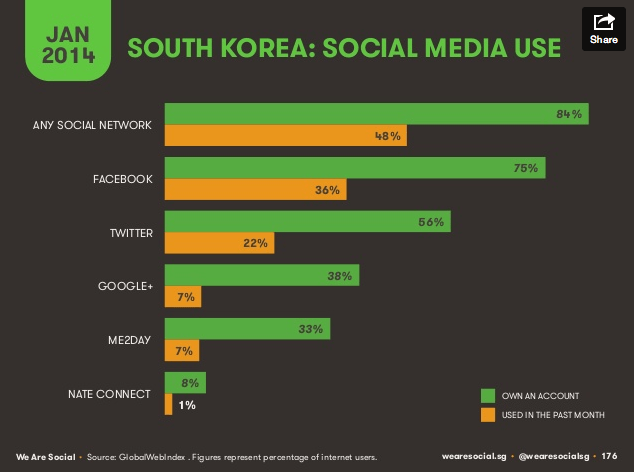 The Monster-owned, JobKorea, is the most popular job board and is pretty much uncontested in it’s field. Like LinkedIn usage in Hong Kong, Korean usage is low with just 850,000 members but growth in this market isn’t as likely as the other markets we’ve mentioned which is worth noting.

Overall, the most popular social sites in which to source candidates in Asia are Facebook, Twitter, Google+ and Sina Weibo. Master the art of utilising these sites as candidate databases and communication methods, and sourcing candidates in Asia becomes just as straightforward as finding them in your home city. That is exactly what our Black Belt in Internet Recruitment helps you to do, and with our recently added Chinese Mandarin content, the course content just became even more comprehensive! Get in touch with one of our Sales team today to request a demo or our Asia-specific course prospectus, and stay tuned for more Asian sourcing tips and hints.

*Check out the full Slideshare presentation from We Are Social here.