The 10 Most Creative Resumes We've Ever Seen 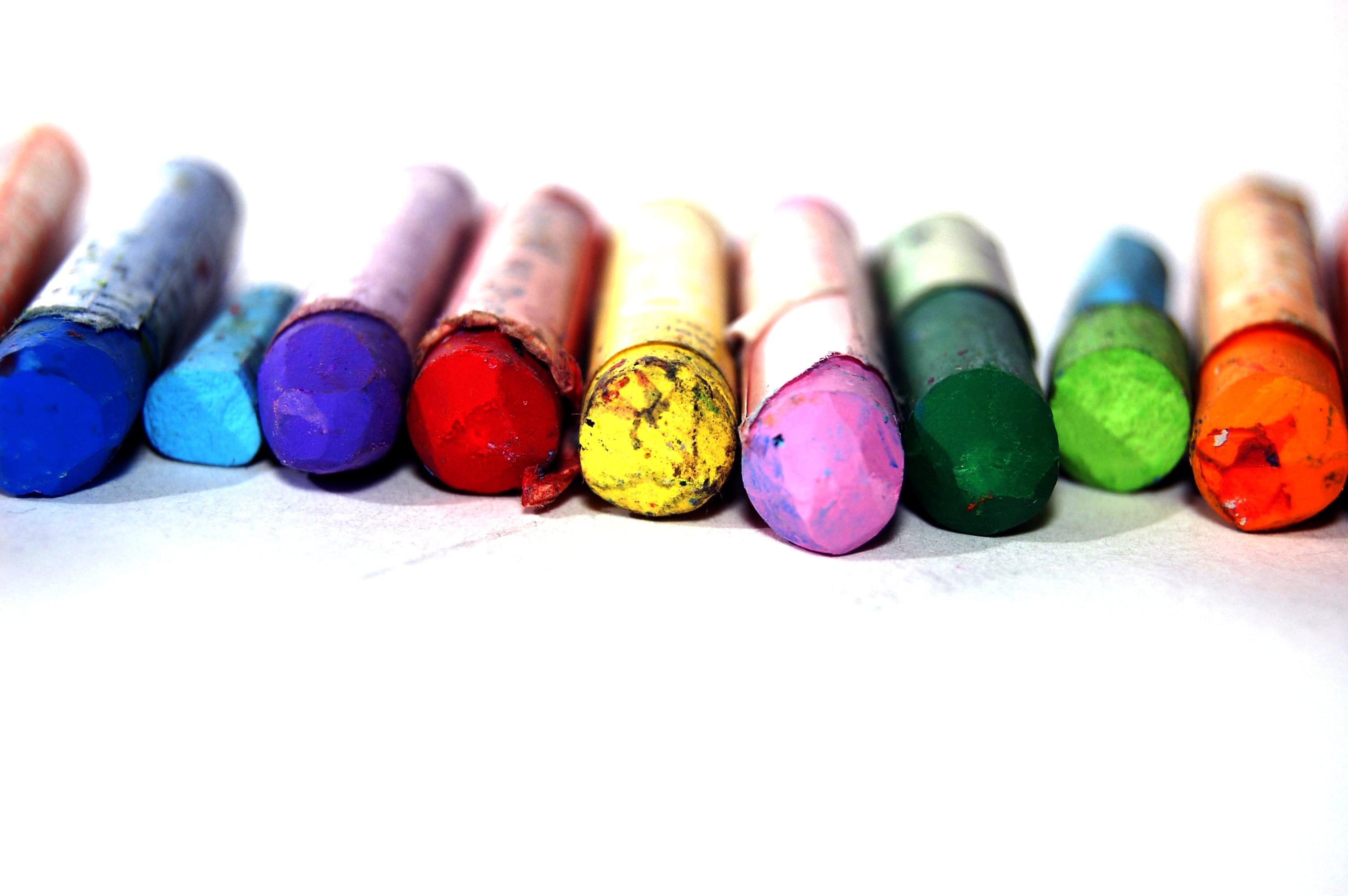 Question: How many resumes pass through your hands on a daily basis?

Second Question: How many of them make a lasting impression?

Barring bribes, blackmail, embezzlement, theft and nudity, potential employees need to do everything they can to stand out. It may be a candidate market, but it’s still a candidate eat candidate world out there. If you don’t go the extra mile, someone else will. What better way to demonstrate one’s creativity than by applying it to a resume?

Check out these 10 examples of CVs that likely got a second look from human resources.

When a potential employer asked Leah Bowman to produce a persuasive advertisement to demonstrate her suitability for a role as Account Service intern in a creative ad agancy, she used her graphic design skills (and love of Lego) to advertise herself for the position.

“Looking for a job can be a bit frustrating at times,” Bowman told Mashable.com. “I’ve applied for dozens of jobs and had a handful of interviews, but sometimes there’s just another candidate that edged you out. I know I’d be a great addition to any team, but I needed a better way to communicate that rather than just sending in a boring resume.” And oh boy, did she find a better way to communicate!

Using the Lego Digital Designer, Bowman decided to create the ultimate first impression by constructing a real-life brick version of herself in Lego bricks and sending it and a specially designed instruction leaflet highlighting her skills, creativity and initiatives, to her potential employer. 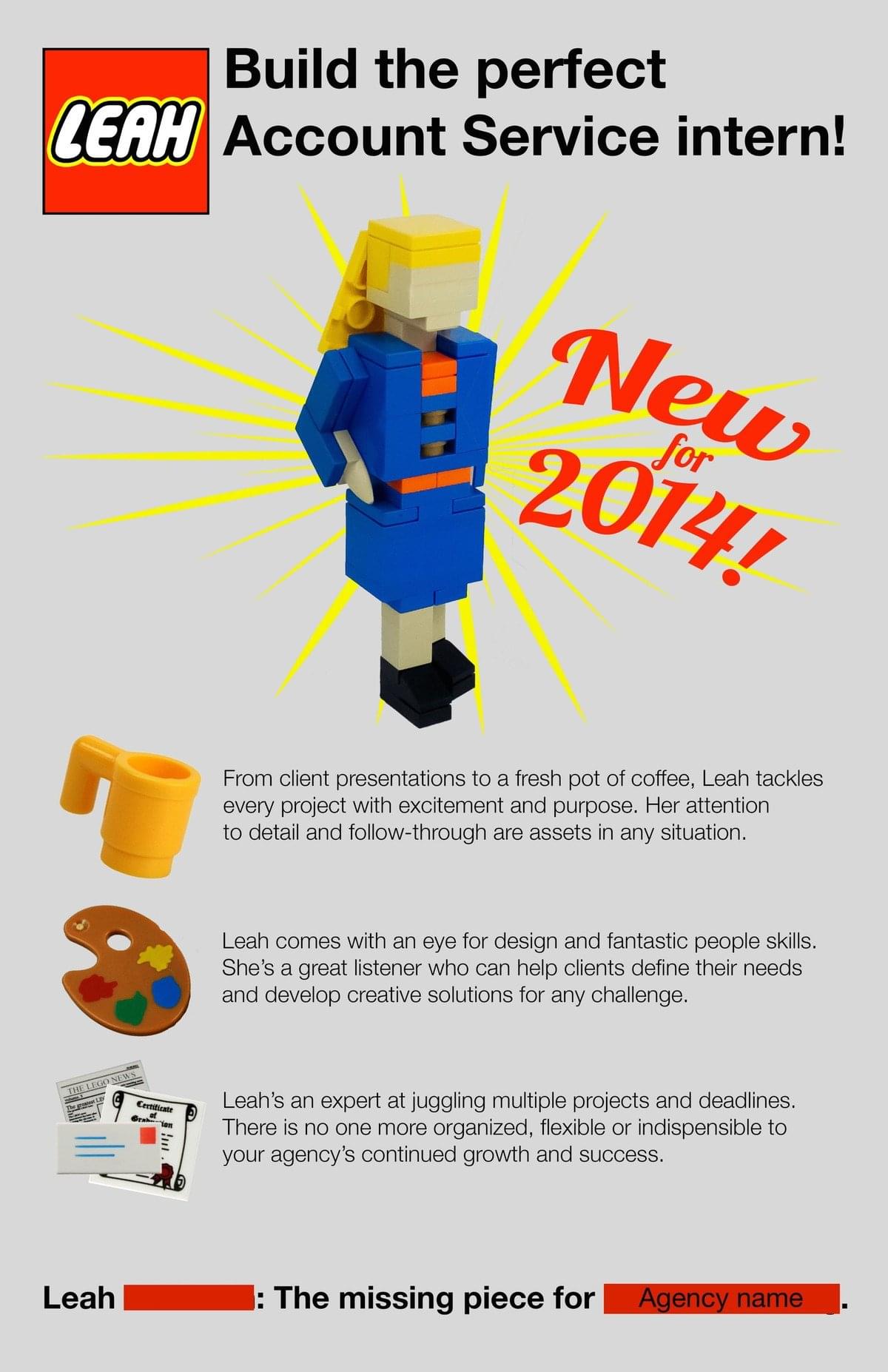 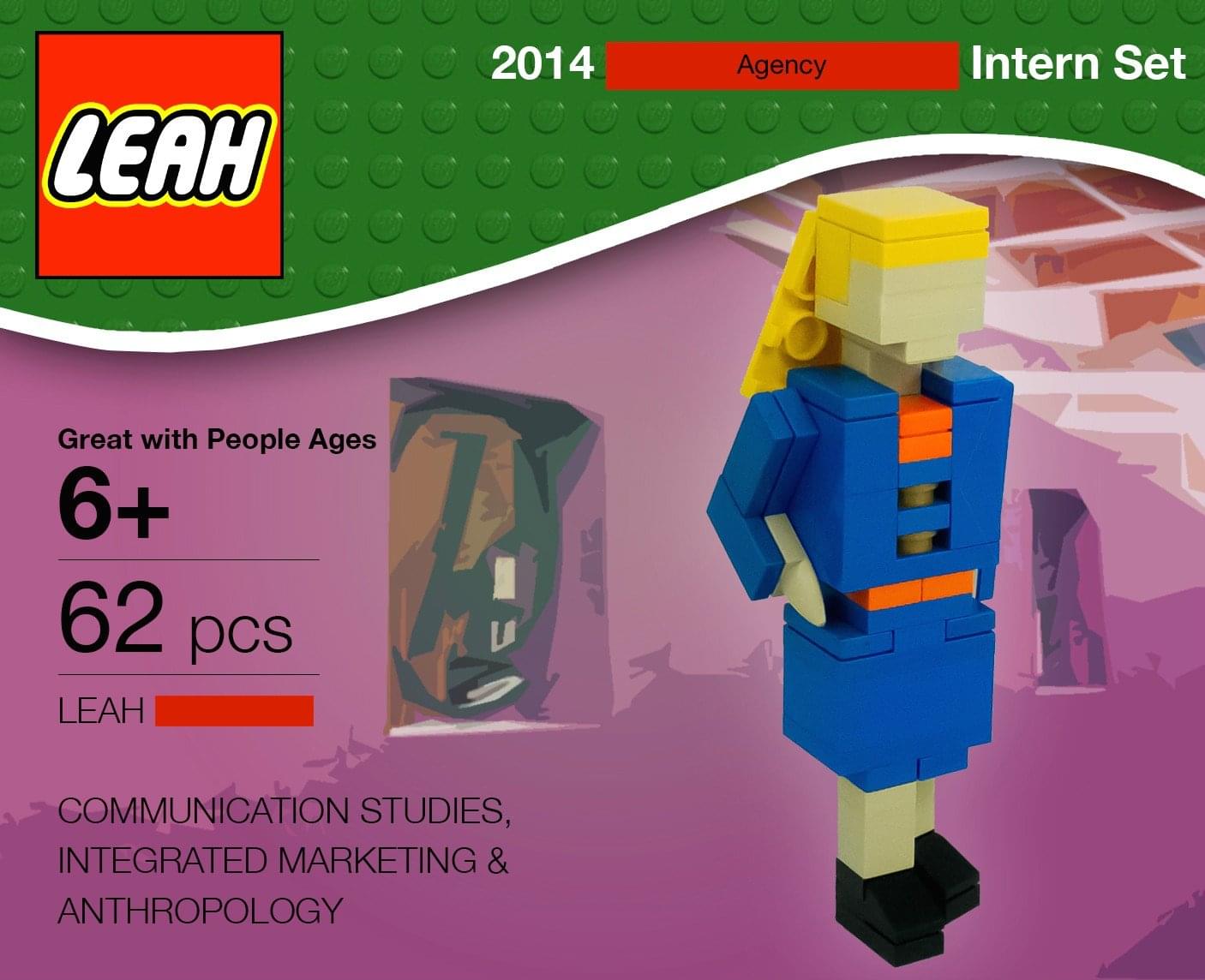 Copywriter Ed Hamilton’s resume is attracted A LOT of attention when he released it to the world back in 2010, and with good reason: It was insanely clever. Heck, it’s STILL insanely clever 5 years later! Not only is it written in a brilliantly breezy, conversational style, it just so happens to be splayed out across Google Maps. Now, as Hamilton points out, “you’ll find everything you’d expect from any other CV, including contact details, education and experience”, you just won’t find it in the usual places. You’ll find it contained within pins Hamilton has placed all over the globe according to where he acquired said education and said experience.

The first pin connects to Hamilton’s home address where he gives a brief synopsis of who he is and what he does, the second to the university where he got his degree, detailing his education and “talking nonsense in shady northern pubs”. After that, each one corresponds to a particular job or experience including a stint at a Japanese TV station and a 3 month stay in Trinadad and Tobago’s capital where he wrote copy for a HIV awareness campaign. 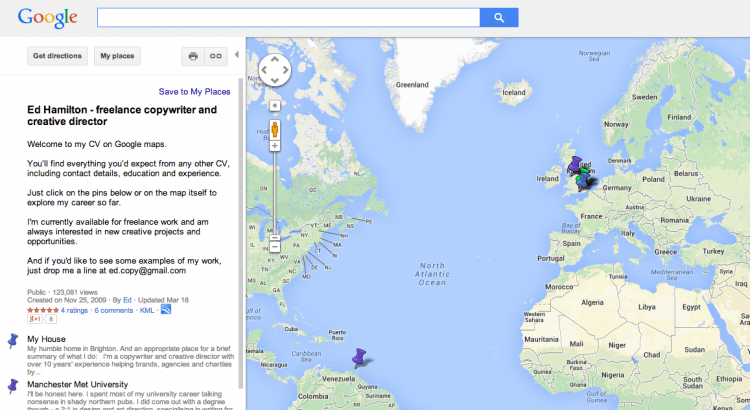 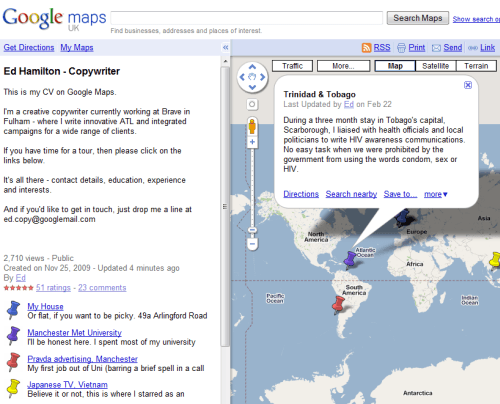 Paper is passé! If you’re looking to make an impression, follow Graphic Designer Melissa Washin’s example and get sewing.

“Sewing is one of my biggest passions, and I wanted to convey that somehow in my resume. I printed my info onto iron-on paper, transferred it to white fabric, and sewed it to a variety of printed fabrics. The result was a tactile item that said something about me without having to be read.” 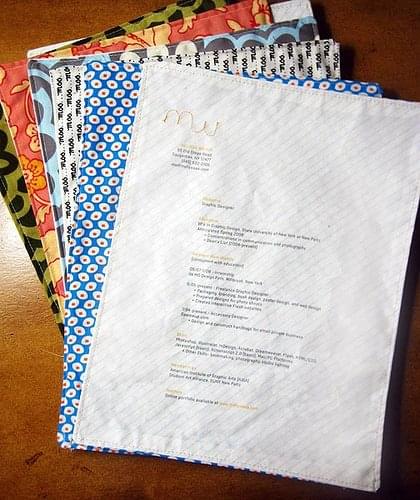 In 2013, Philippe Dubost, a Web Product Manager, was out of work and looking for a job. So, rather than write the traditional resume, he decided built an “Amaz-ing” one that looked EXACTLY like an Amazon product page… exactly like one. Like, the level of detail is unparalleled. Not only did it boast a list his experience and achievements in the “Product Details” section, and a “frequently bought together” section showing running shoes and plane tickets (he’s an avid runner and traveler), it also had an extensive customer review section, which included several five-star reviews from past employees and a few one-star reviews Dubost attributed to “ex-girlfriends”. (LOL)

His effots went viral, racking up 1.5 million views over the course of his job search, and eventually got him 150 job offers and finally a job as a Tech Product Manager at a rapidly growing New York start-up named, Birchbox. Once he was hired, he made sure to update his Amazon resume to show the “product” was no longer in stock. Nice touch!

Sure this one has some grammar issues, probably not enough details for most employers and Oona’s Devian Art username is exceptionally questionable, but I still think it’s a wonderfully creative resume that’s a bit different from the norm. 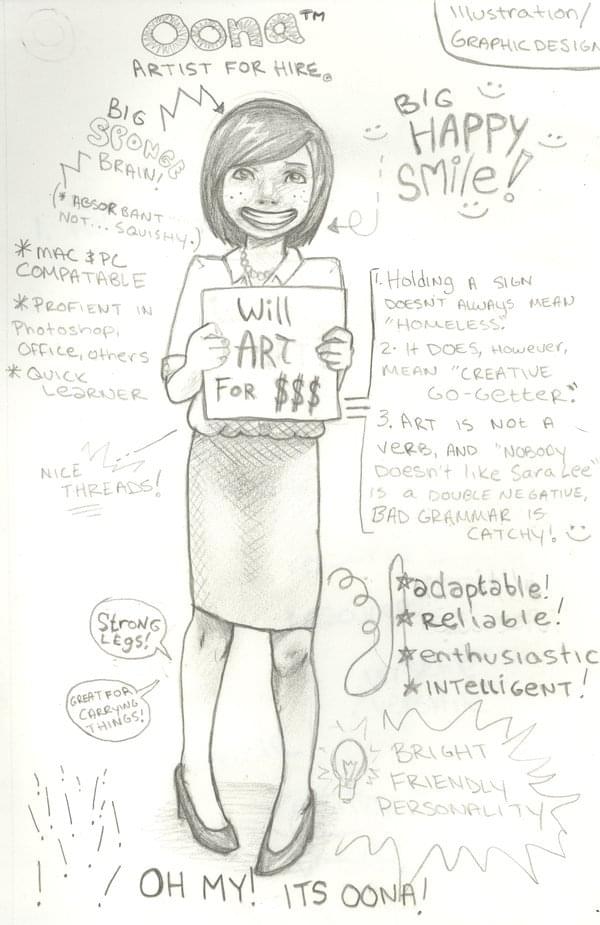 Sick and tired of having to read peoples’ resumes? Robby Leonardi feels your pain… that’s why he created a playable one instead!

Leonardi, who has had past jobs at AOL and Industry Next and now works at Fox News, built a side scrolling interactive resume reminiscent of games like Mario, where you run through the “level” while learning about his experience and achievements. It’s quite the thrill ride as well, where you go underwater to see his skills while catching a hot air balloon to see what awards he’s won. 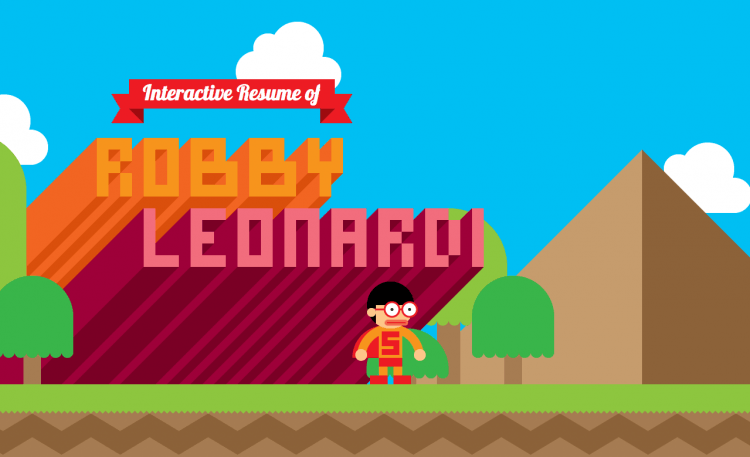 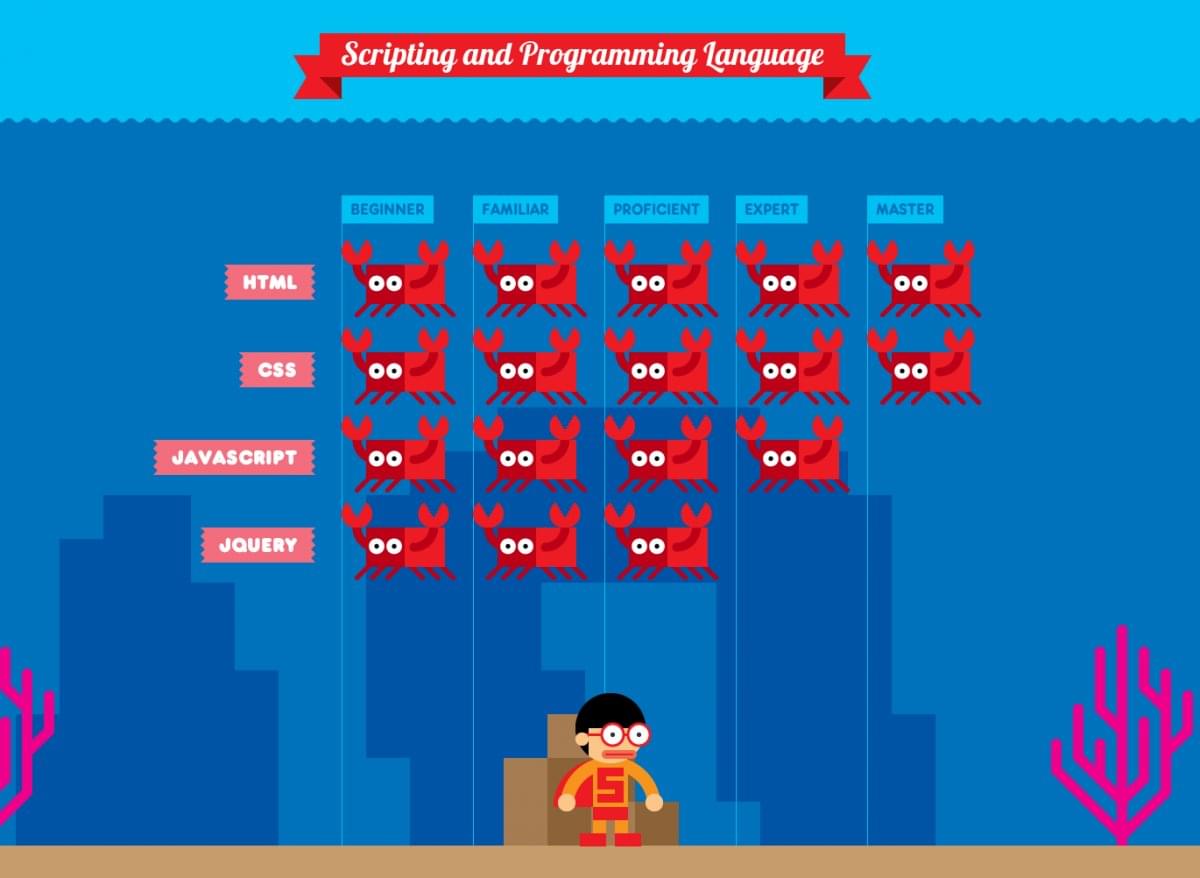 Research shows that recruiters spend an average of six seconds looking at a resume. So, with that in mind, journalist Dawn Siff created a six-second Vine resume in February of 2013. And guess what? It paid off. A month after posting it, Siff landed a job at The Economist, and now works at DigitasLBi. Result!

If you’re not gifted with Photoshop, a drawing pencil, video game production, the art of Vine production, or a sewing machine it can be difficult to personalise your resume the way you’d really like to. That’s why Graeme Anthony decided to make an interactive video resume instead.

Anthony’s video includes links to different sections, including “About Me,” “Portfolio,” as well as a “Timeline.”

He sent that video to multiple recruiters—and it looks like his effort to make their jobs a little more interesting paid off. Anthony received multiple interviews, a job offer, and 400,000 YouTube views. He’s worked in a number of different PR and social media roles since:

9. The Cinema Reel Resume
“This is the “resume” I sent to Pixar for an opening they have that I’m interested in” says Brian Moose rather modestly on his Flickr profile. But Brian’s resume isn’t just any old resume, it’s quite possibly the most beautiful, most personalised piece of art we’ve ever seen!

Brian had created an elaborate vintage-style package which included a customised suitcase containing a replica cinema reel concealing a simple notebook. But the surprises for Pixar’s recruiters didn’t stop there. The concealed notebook contained within the replica cinema reel was packed full of elaborate hand drawn illustrations pertaining to Brian’s experience, skills, previous roles, and his vision for the future of Pixar: 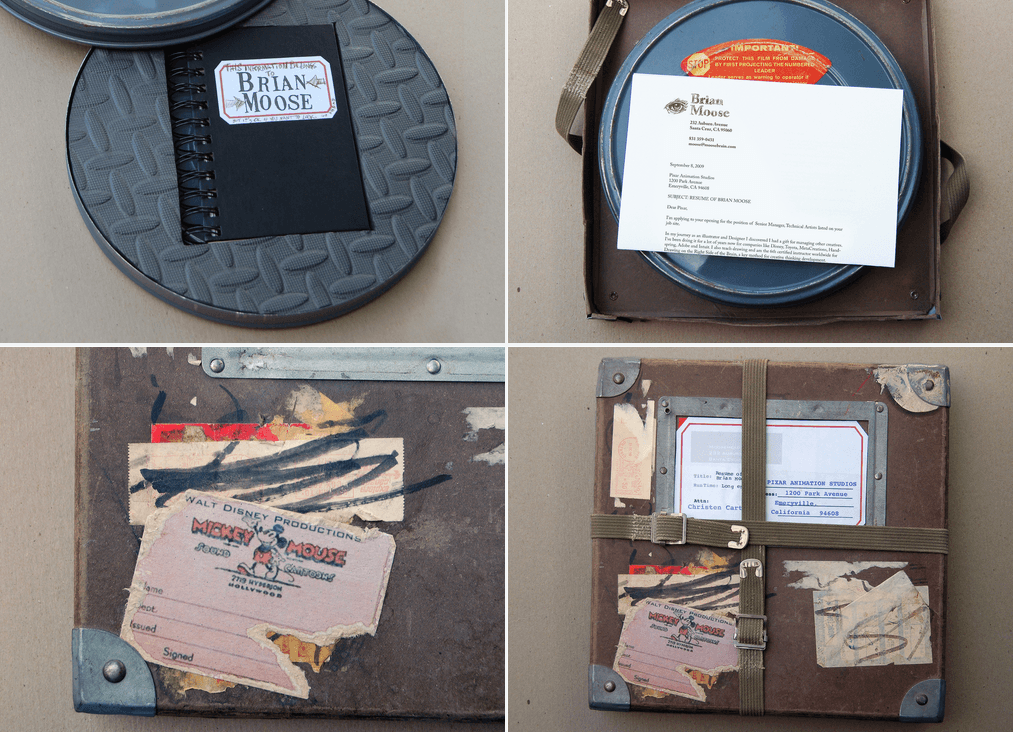 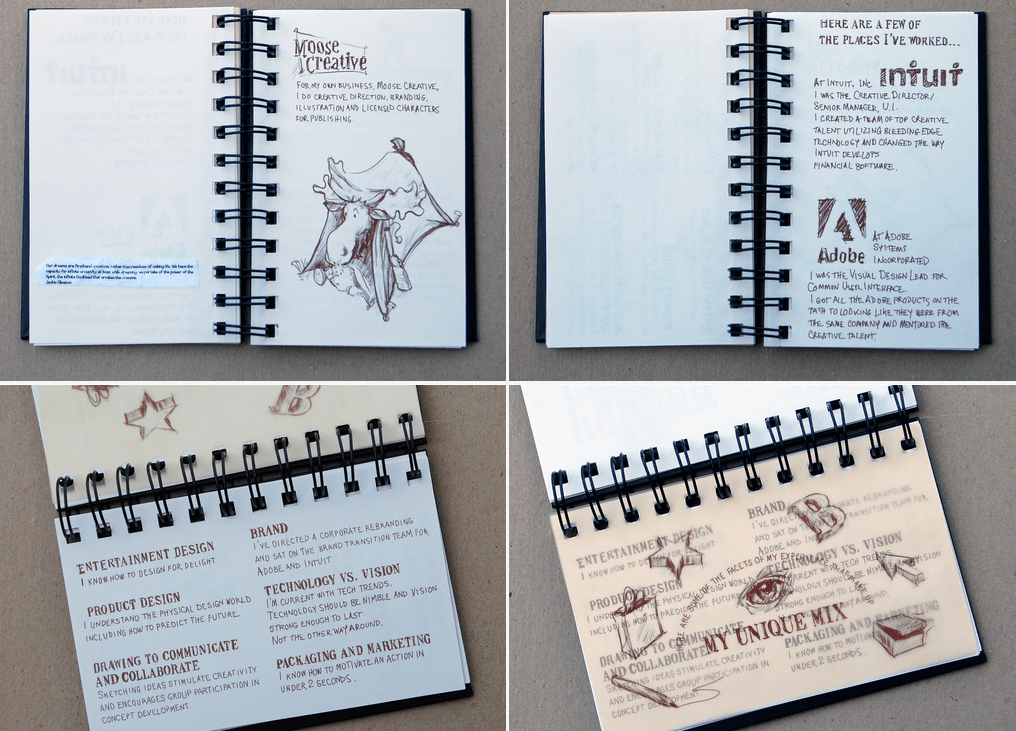 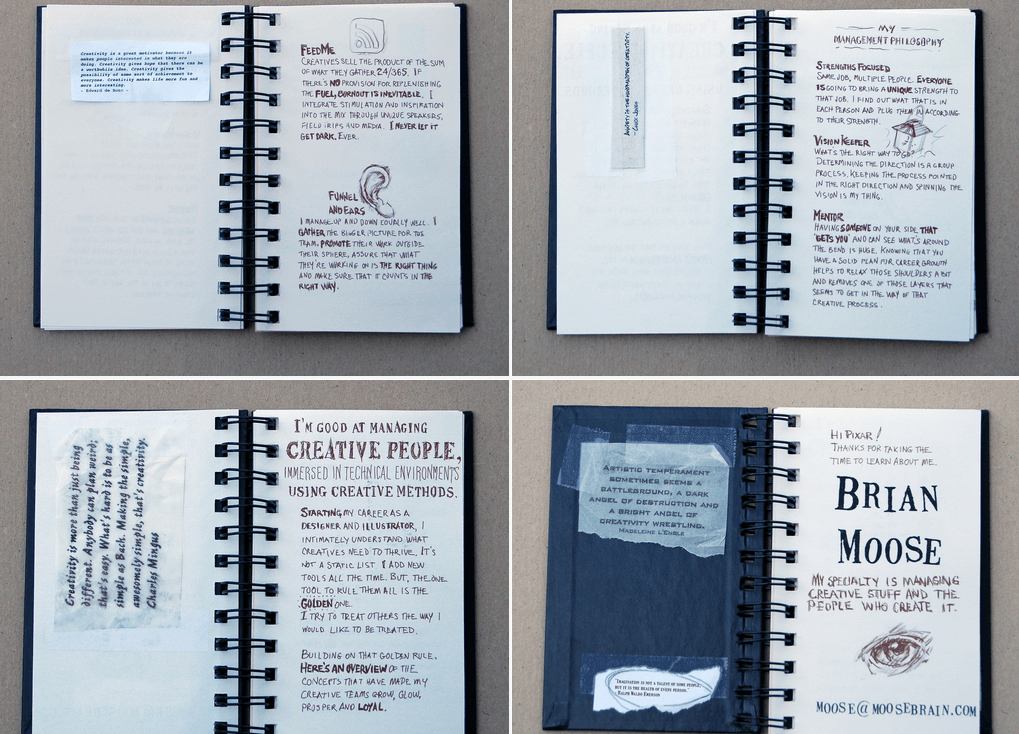 When Eric Gandhi was on the hunt for a job as a web designer, he decided to use the web to help him land the role. Using his skills, he made it so that the search phrase “Creative+Hard-Working+Talented+Excellent+Designer+Unique+Autodidactic” would prompt the “Did you mean: Eric Ghandi?” suggestion and display the applicant’s full resume underneath.

And yes, his resume story has a happy ending. In an interview with the Business Insider, Gandhi said that a Google employee found his unusual CV on LinkedIn and offered “to refer me for a position there, which led to an interview”: 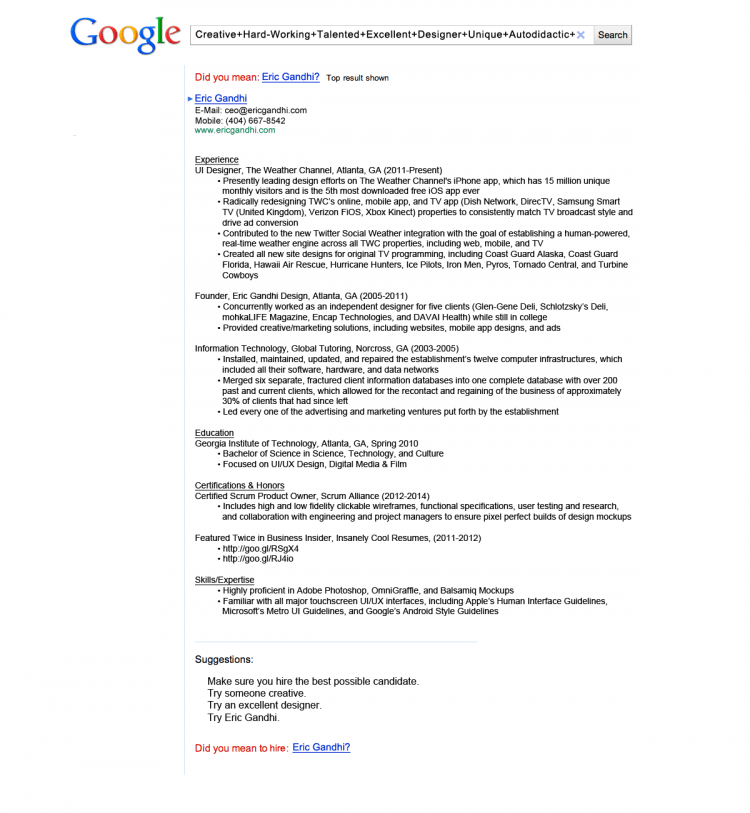