The CV and The Little White Lie - Thamsanga's Story 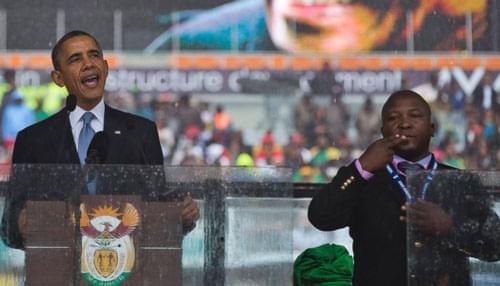 How big are the balls on the guy who did the “sign language” translation for Nelson Mandela’s memorial ceremony. Do you think he told a little white lie on his CV and thought they will never catch me out on this. “It’s fine, I will put down some impressive stuff under “Other Activities” such as shark diving, motor racing, charity work and signing for the deaf community – what are the chances any of those will ever come back to bite me (pardon the play on shark diving/bite)?”

Then one day in the ANC offices word goes round that Nelson Mandela has died and they need someone to sign for the ceremonial event. The question is raised about signing for the event and the shout goes out, “Do we know anyone that can sign?”. You can almost feel Thamsanqa’s (that’s the guys name) ass clench as someone says “hey you sign don’t you?” and Thamsanga think’s about his options for a second before braving things out and saying……”yes, yes I do“.

Unfazed by the prospect of signing to billions he decides to go for it, it just might work out, we just might pull this off and maybe, just maybe the world’s deaf population will be watching something else on the day.

Oh I envy your confidence Thamsanga. Even if I could sign I would not have had the cohonnes to stand up in front of the world for fear of getting something wrong. But not you, you just went for it and waved your arms around and kept the lie going throughout. Hats off!!

At first you claimed to have been happy with your performance but now it seems you are claiming you had some kind of hallucination due to medication taken for your schizophrenia and naturally I empathise if you have a mental illness but it sounds like the fishiest excuse since a dog ate my homework in primary school.

Has anyone out there ever had a white lie on their CV come back to haunt them? Your stories, comments are most welcome.