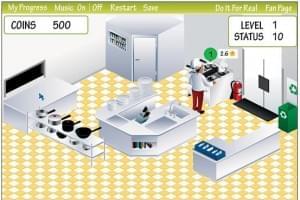 Marriott Hotel group has developed a game for Facebook, due to be launched this week, that likens itself to Cafe World (think Farmville but indoors) where one runs the kitchen and makes all decisions that determines a hotel kitchen’s success among other aspects of the hotel, all in order to recruit hotel staff. They’re following in the footsteps of the US army that developed a game (America’s Army) for Facebook to recruit new troops, and served as a cost-saving measure in its continual recruitment drive.

My Marriott will give people a “realistic insight” in to how their hotels work, introduces the depth of their hotel brand range, and has an integrated button called “Do it for real”, which will bring you to their careers page. I’m sure you’ve heard of The Marriott Hotels Group (Marriott, Shelbourne and Ritz Carlton in Ireland), so are aware of its consumer branding as a luxury hotelier. To get great people applying for roles in their organization, creating an interactive Facebook game is a strategic method of Employee Branding.

This may be a worthwhile venture for industries who need to pre-screen or audition large-scale or highly skilled candidates. For example, gaming or high-tech IT firms can create a gaming platform which requires the candidate to create the code for the next step of the game etc, as a means to judge both their language skills and/or imagination. It can also be used by the likes of fashion retailers who need everyone from sales assistants to stockroom, stylists and sales managers, testing their abilities to work in a virtual store environment and handling customers. The imagination can run wild with possibilities!

By no means is this a small-scale operation however, and developing a game is considerably expensive. But if your firm spends more than ‚¬50k on acquisition and recruitment-consultancy fees a year, you may just find a space in your budget for developing such an application. Let candidates come directly to you through your game or fun application on a social media site, learn about your company and develop an interest in working for you. You can source excellent potential candidates as they progress through the game or follow your online activity through Facebook, Twitter, LinkedIn etc. Prepare to see many US organizations jump on the bandwagon in the next 6-12 months. Any guesses as to who’ll be the first to design a game as a recruiting tool in Ireland? What kind of game would your firm create?