**5/8/2014 – On the eve of the 2014 Dublin Horse Show we thought we’d share our unique perspective on the striking similarity between recruiting candidates and showing horses! Enjoy!

*Sigh* The third week in August is always the most depressing time of year for me. The third week of August always signifies the end of the Dublin Horse Show for another year and I now have a 12 month wait until I can once again experience the thrills and spills of every Irish equestrian lover’s favourite event. *Double sigh*

Why am I talking about the Dublin Horse Show on a recruitment blog I hear you ask? Well it just so happens that I had a recruitment related epiphany at this year’s show. It happened as I was watching my sister compete in the Ridden Connemara class. A class comprised of 22 similar sized, pure white ponies. Just how does a judge begin to tell the difference between 22 almost identical looking ponies?! Similarly, how does a recruiter begin to differentiate between 22 candidates who all have the same basic education level, skills and experience? In other words, showing horses is a lot like recruiting candidates.

A showing judge does however, have a number of weapons in his/her arsenal with which they can whittle down the competitors to form their final winning line-up, weapons that if deployed by recruiters in a similar fashion, could help the efficiency and speed of the recruitment process. Let me show you how:

Traditionally, the start of every show class will begin with every pony going around the ring in both directions at a walk, a trot, a canter and eventually a gallop as a group. The purpose of this is to note how they behave in company. Do they continue to listen to their rider’s aids while galloping in a large herd of other horses or do they bolt and buck with excitement? You get the idea. In recruiting terms, it is also important to see how each candidate measures up to the other candidates in the running. Each candidate may have the same basic education, skill set and level of experience but do they have any extra skills, interesting hobbies or personality traits which set them apart from the group in a good way? Have they won any awards for their work? Have they completed an extra part-time diploma in a useful skill? Do they share interests with current team members? Do they partake in a particular sport that demonstrates they have a committed personality? Are they a member of any societies or clubs that show the kind of personality they have, like an amateur dramatics society? As a recruiter, you should be aiming to find the candidate with the best fit for the organisation you’re hiring for, just like a judge is trying to find the best Connemara pony to represent the breed standard.  By differentiating candidates based on these types of elements it will be easier to determine who will fit best into the organisation. 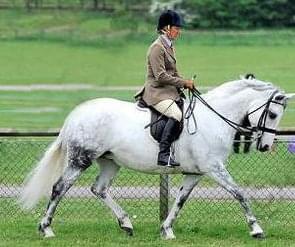 After the group, the judge will pull the ponies into a provisional line-up in the centre of the ring based on how they behaved in the group, the same way a recruiter will form a shortlist of potential candidates after comparing them against one another. The judge will then ask each rider to perform a short show piece in order to assess the pony individually, how it listens to it’s riders aids and how it behaves on it’s own. A showing judge should assess each pony’s way of going and behaviour on the day of the show regardless of their previous triumphs. In the same way, a one-on-one interview will tell you a lot of things about a candidate. Regardless of how perfect the person sounds on paper or looks on video, there is no substitute for meeting them in person and experiencing them for yourself. Are they on time for the interview? Are they dressed appropriately? How do they cope with the questions they’re asked? What kind of a personality comes across?

The third and final phase of a showing class is known as ‘saddles off’. The ponies’ saddles are removed and the judge is then able to assess the confirmation and physical make-up of the pony without the distraction of a saddle, to check if they stand up to the breed standard. For recruiters, the equivalent of the saddles off phase is the second round interview. By now, the recruiter has a pretty good idea who the right candidates are, but in order to make the final hiring decision a more in-depth interview is needed. The second round interview is the recruiter’s chance to ask the more complicated questions that were not asked in round one and to clarify experience, skills, education or any relevant information about the candidate and their CV. By drilling deeper into what makes the candidate tick you should be left without a doubt as to their appropriateness for the company you’re hiring for, just as the judge does with the Connemaras. All that’s left for them to do is hand out the prizes and the recruiters to pick up the phone and make one candidate very happy.

So there you have it. Horse-showing and recruiting are really one and the same thing, the only difference is the vetting.