Finally! A Rapportive Replacement has Arrived

We were shocked and oh-so disappointed last month to learn that our beloved ‘Rapportive for Gmail’ Chrome extension, was no longer going to have the functionality we once loved it for. But, you know what they say, “all good things must come to end”, and that was certainly true of Rapportive once LinkedIn had had their wicked way with it.

But wait! Is that a light at the end of the tunnel I see?! Why yes, yes it is! Turns out, recruitment fans, that Rapportive has itself a twin brother (one that hasn’t been bought by LinkedIn) and he goes by the name of Rapporto.

Rapporto “shows you everything about your contacts right inside your inbox” including the contact’s job title, their Facebook profile, their Twitter account, their LinkedIn, their Google+ and a few more besides. Reviews of the product are really good so far with many people saying they have gone ahead and replaced the “broken” Rapportive with it’s “solid replacement“, Rapporto, and are “very happy and satisfied” to do so. Some users even went on to say “this is actually better than Rapportive“! 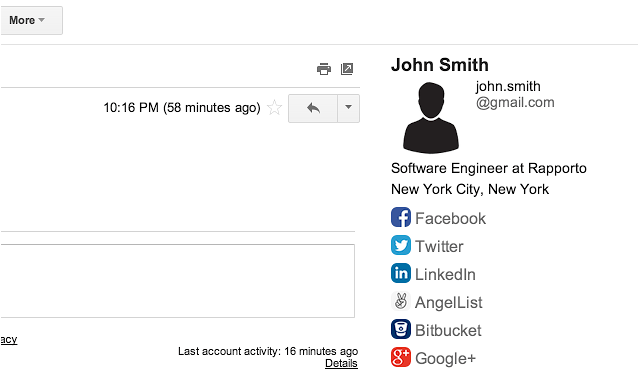 It’s little less slick then Rapportive was in it’s heyday in our opinion, but hey, it works!

If there’s one thing we thought the app store didn’t need right now, it’d be yet another messenger app. I mean we already have WhatsApp, SnapChat, Hangouts, Line, Kik and Facebook’s new Messenger app, so why would Pinterest (most famous for it’s visual content than the written word) spend time building and releasing a Messenger app of their own?

Pinterest users send 2 million pins to their friends, colleagues and family every day. And up until now there has never been a native way for responding to the those pins, short of sending your friend/colleague/sister an email. And that’s where Pinterest’s latest venture, the Pinterest Messenger, comes in. Unlike Facebook’s new Messenger app which just let’s you send a quickly hello, Pinterest’s messaging service pins (use the pun) conversations around an object. “We see it as heavier weight than a Facebook Messenger” says Tom Watson, the product’s designer. “It’s more of a conversation around an object than just a quick hello.” 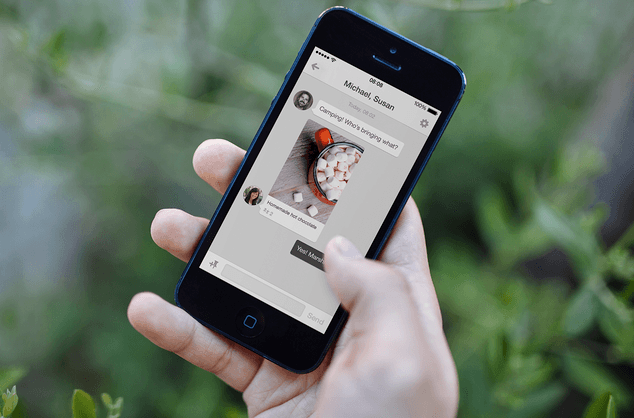 But the really impressive thing about Pinterest messages is that the pins you send within the app retain all the functionality of a pin you see anywhere else on the site. Anything you can do with a pin on Pinterest’s web site, you can do inside a message: pin it to a board of your own, send it to another friend, or click the heart’ to add it to your list of favourites. You can even drag a pin from the site into a message. 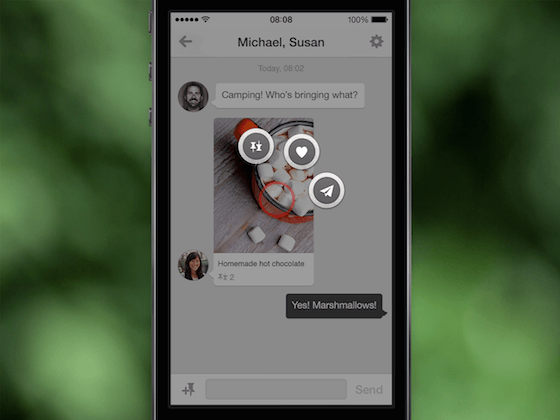 That might not sound like much, but it blows most other internal messaging products out of the water. Unless you’re among the relatively few number of verified users, Twitter’s years-old direct-message feature still won’t let you send most URLs, even though sharing links is a core use of the platform. It was big news last December when Twitter DMs finally added the ability to send photos. Meanwhile on Facebook, shared links can be opened and not much else. Pinterest goes an additional step further by letting you send entire boards or user profiles to your friends using the message feature. It also includes group chat for up to 10 people!

To see more about how this ingenious little app works, watch this video:

Yep, this is definitely one of the nastiest lawsuits we’ve witnessed in a long time, but a throughly entertaining one too! Long story short, if you’re not already familiar with the lawsuit that’s been rattling on for months; HiringSolved scraped LinkedIn’s data, LinkedIn sued them for it and HiringSolved surrendered.

Now, as part of the settlement, the talent aggregator, has to destroy all of the data it collected from LinkedIn. But they never intended to do that the easy way. Oh no!

Instead of just deleting the data (it was digital after all), the aggregator decided it’d be way more fun to dump it all onto around 40 disks or so, take them out to the Arizona desert, use them as clay pigeons and have a lot of fun at LinkedIn’s expense! 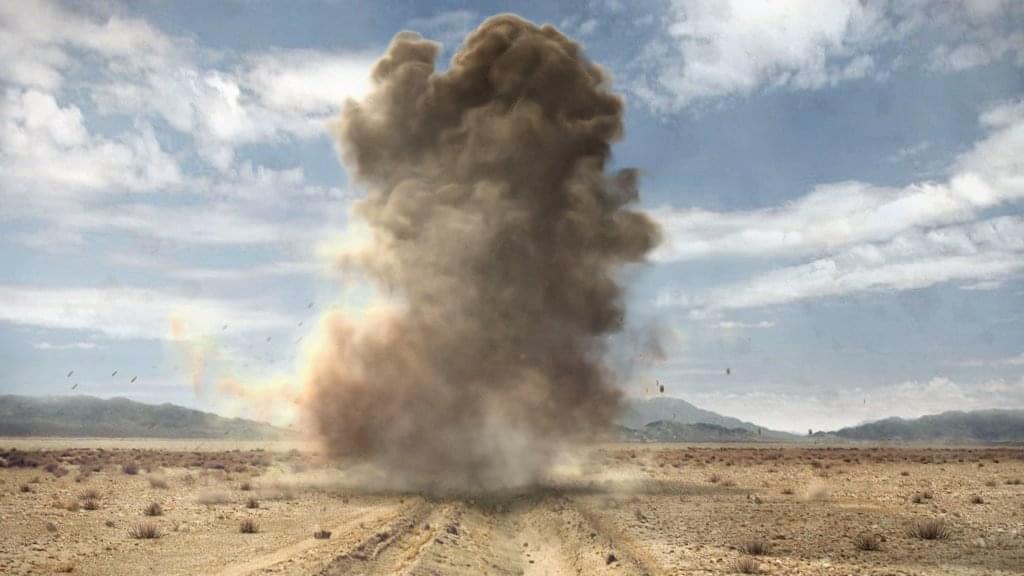 Developments are happening thick and fast when it comes to Twitter’s advertising platform between promoted accounts, promoted tweets and Twitter cards, there are some fantastic options now available to recruiters looking to advertise there jobs more cleverly and successful on Twitter. And Tuesday saw the announcement of yet another fantastic Twitter advertising product: promoted video.

Yes, the beta launch of promoted video that allows advertisers (Read: Recruiters) to upload and track user (Read: Candidate) engagement is here. On their official blog Twitter stated “Earlier this year, we began testing a new Twitter Video Card that streamlines video playback and brings a one-tap viewing experience in our users’ timelines. These tests have shown that Tweets containing native Twitter video generate better engagement and more video views than before. After months of experiments and feedback from users and brands, we’re excited to announce a beta test of Promoted Video on Twitter!”

They also went on to point out that advertisers using promoted videos will have access to “robust video analytics” including video completion percentage and a breakdown of organic versus paid video views, and that advertisers will have the ability to run ads with a new Cost Per View ad buying model which means they will only get charged for placing the advertising video when a user starts playing it.

The beta is currently only open to select content publishers and users with verified accounts, but somehow we don’t think it’ll be too long before we see this capability being released to the public.

There’s a brand new profile makeover on it’s way and it’s touted to make you (in LinkedIn’s own words) “ridiculously good looking” in meetings that is!

The new new look profile, which is currently only available to see and use on mobile, is designed act as a personal assistant who can “whisper in your ear” and remind you of not only where your candidate/connection works currently and what their job title is, but also who you have in common with them, whether you overlapped any years at school or if you ever shared the same company. And it’s designed to do so, so that the first conversation to have with that candidate/connection is truly meaningful and sparks a lasting relationship.

So if you fancy looking “like the smartest person in the room because [you] know what you have in common with people you’re meeting for the first time” then download the latest version of the LinkedIn mobile app for Android here and for iPhone here.

Yes, the crowdsourcing referral bonus for helping find a president for the company’s latest sideline, NRG Home, has been set at $100,000. “We wanted the referral fee to generate excitement and drive people to action. The position we are searching for is a unique one, so our crowdsourcing campaign had to be innovative as well” said NRG’s Jennifer Wallace. 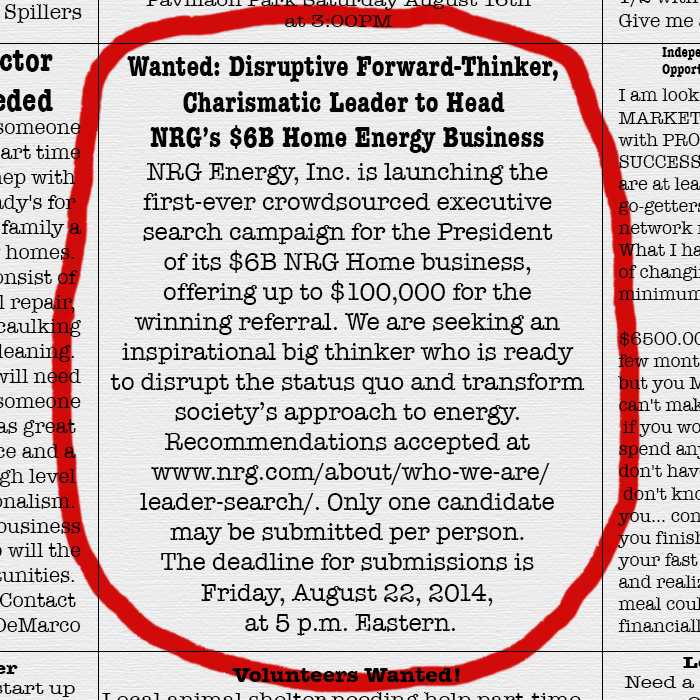 So if you think you can provide them with a US candidate and you can do so by August 22nd, be sure to fill out this form. Just remember, you can only refer one person and if you decide to refer yourself, the money must go to a charity of your choice.