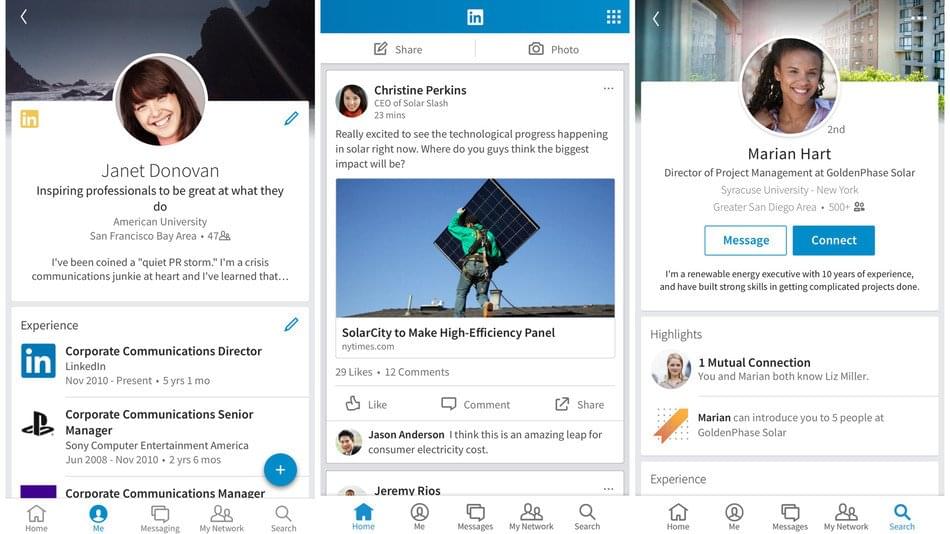 LinkedIn’s brand new mobile experience is now available globally. The new app, which was first previewed in October, makes the app look more like Facebook and other social media apps.

The app has now been streamlined the into 5 core areas:

Your Feed (Home) is made up of updates from people in your network and content they are sharing on LinkedIn. Similar to Facebook’s News Feed, the app filters which updates you’ll see based on what you’re most likely to be interested in — a feature that will get better over time as you use the app more according to LinkedIn. For the first time, as part of a lightweight onboarding process, LinkedIn will ask you what content you are interested in, in order to set up your initial feed and over time you can also unfollow things that are less valuable to you.=

Me represents your professional brand. This is where you can see all things about you like; who’s viewed your profile, who is commenting on, or sharing your posts etc. It also makes it easier and more intuitive to update your profile via mobile, something that was quite difficult to do and clunky in the past.

My Network is a daily briefing of what’s happening in your professional network, so you can see in seconds people you may know, new posts from your network and suggestions to keep connected. For example, it will offer prompts to say “Congratulations!” to a connection celebrating a new role or work anniversary, or send a message to someone in your network when they have written a post on LinkedIn.

Syncing your calendar will also help improve this section.If you have a meeting with a candidate at 3:30pm, the new app will prompt you to look at their profile and give you details on what shared connections or shared interests you have.

Messaging abandons email in favour of a more casual way to stay in touch, allowing you to initiate quicker conversations on a lighter-weight interface. This makes it easy for you to ping someone in your network on a quick question or continue a conversation as you would in real-life.

Search is now “300% faster”, and “a lot smarter”, which means you can quickly find people, jobs and groups you’re looking for.

Have you downloaded the new app yet? Fancy sharing your thought on it with us? Then tweet us @SocialTalent or comment below. 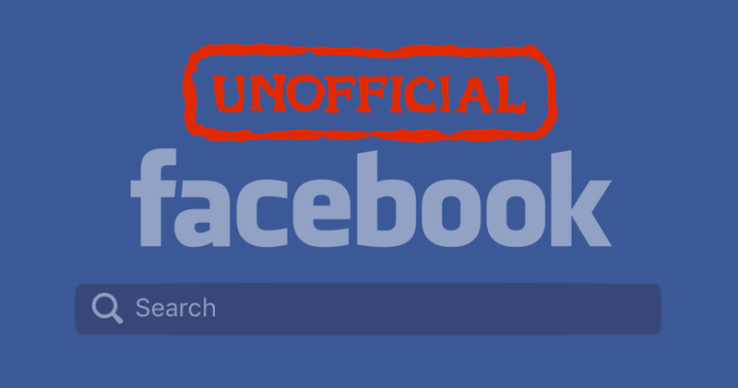 Facebook doesn’t have an easy-to-use advanced search engine, so one guy took matters into his own hands and built his own! “Search Is Back” lets you use familiar drop-down menus to find people by city, relationship status, school, first name, and more. Plus you can search for photos, events, posts, and other stuff. Sounding good, recruiters?! 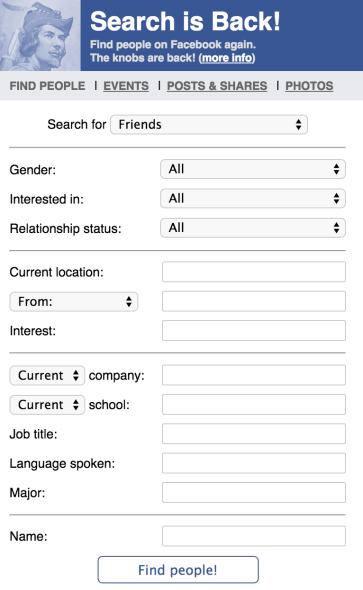 What’s special here is that you don’t need to know Facebook’s complicated and often confusing Graph Search terms like “Friends of Friends named Sarah who went to Stanford and work at Google”. Search Is Back turns your simple menu selections into the proper URL and sends you to the search results page on Facebook’s official site with no extra login required.

Unfortunately, the product usually only works for people in the US who have received the Graph Search rollout, but one thing you can do that helps is to adjust your Facebook language setting to US English if you don’t use that already.

Facebook made a big deal of its Graph Search feature for finding specific things back in 2013, but unfortunately for them, using sentences instead of traditional keywords confused people including many recruiters who tried to tap into Facebook’s vast pool of users. In fact, Facebook VP of Search Tom Stocky told TechCrunch.com back in October that “the interaction model for search with these natural language phrases was not right for a mass audience.”

So then in October, Facebook launched full-text post search, but that made Graph Searching even tougher since Facebook would confuse sentences for keywords! Facebook does have some advanced search features, but they’re split up and buried in weird places like the Find Friends tool and the sidebar options of old-school pre-Graph searches.

Search is Back creator, Michael Morgenstern, told TechCrunch.com “it sucked” how Facebook screwed up search. So he “did a lot of poking around” to find out what Facebook URLs did what, and since Search Is Back doesn’t use Facebook’s API, it might be harder to shut down.

Facebook might find a way to shut down Search Is Back, but until then, it’s a free and privacy-safe way to find anything (candidates! Lots of candidates!) on Facebook with a simple set of boxes. Check it out here.

If Mark Zandi, Chief Economist with Moody Analytics is correct, recruiters are about to face some of the most difficult recruiting conditions in years, if not ever.

“Job growth remains strong and steady. The current pace of job creation is twice that needed to absorb growth in the working age population,” says Zandi. “The economy is fast approaching full employment and will be there no later than next summer.” His prediction comes after ADP reported that the US added 217,000 private sector jobs last month, 27,000 more than job growth economists expected!

The evidence, though, points strongly in that direction:

There is, of course, no guarantee that these trends will continue. However, ADPs monthly reports show that the job growth engine is the nation’s smallest employers, those with fewer than 50 employees. Geographically dispersed and spread across all industries and including most, if not all, occupations, they tend to be less sensitive to global shocks and are unaffected by the demands of Wall Street. 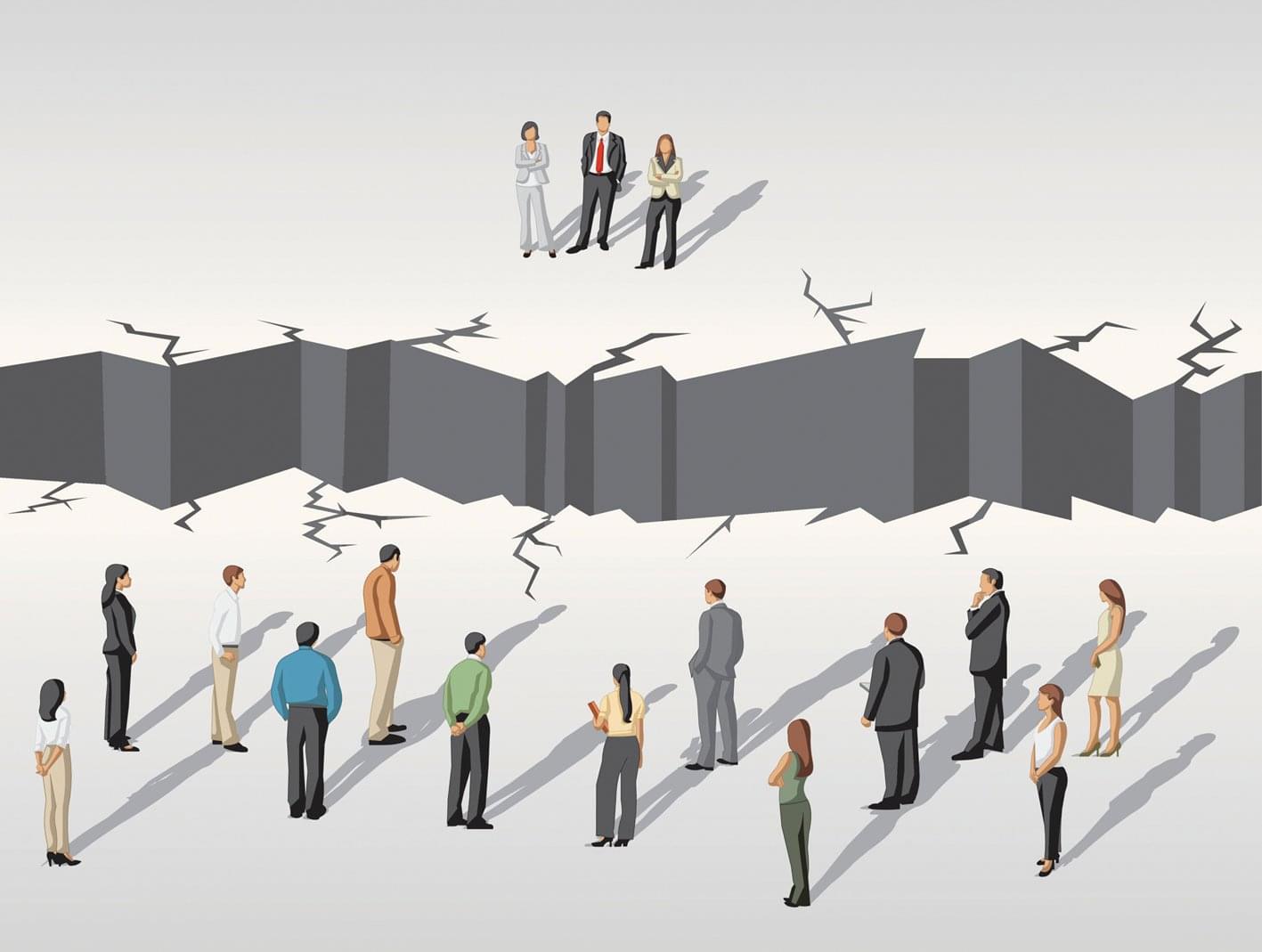 The UK’s “spiralling skills gap” has worsened in the past year as there are almost 2 jobs available per candidate, according to a new report published by online job board, Adzuna.

Doug Monro, Co-Founder at Adzuna, says that the multitude of vacancies doesn’t equate to all candidates being able to find employment with the same ease. To find a job, he says, candidates have to possess the right set of skills.“Rising vacancies are signalling a spiralling skills gap, which appears to be worsening as many positions are left empty. As the festive season approaches, employers and companies are yet again reliant on the delicate yet crucial role internally migrating workers and workers from overseas have to play.”

The comment comes as the CIPD has stated a similar view. The professional body for HR and people development recently proposed that foreign workers can help close the skills shortage.

Labour Market Adviser at the CIPD, Gerwyn Davies, said: “The growing proportion of migrants coming to the UK who have a definite job to go to illustrates the valuable role migrant workers are playing in minimising the skills shortages in a buoyant UK jobs market.”

Monro continues that many of the advertised roles are temporary positions that leave “workers without long-term job security and reliant on the seasonal economy. However, these new jobs do bring a rare flexibility to workers, offering part-time and temporary options which can be a lifeline to those in need of income. But in this day and age, jobseekers shouldn’t have to choose between security and flexibility – these benefits should be available to everyone.”

While the market is continuously candidate-led, advertised wages are struggling to keep up with the wage rises. This comes after companies changed their focus on retaining rather than recruiting staff, a recent Adzuna report revealed.

3 New Faces to Join SHRM Board Next Month

Joining the 13-member strong SHRM board of directors beginning January 1, 2016 are:

Browne, who has served on SHRM’s Membership Advisory Council, and Morris will serve two-year terms. Enright will serve a one-year term. 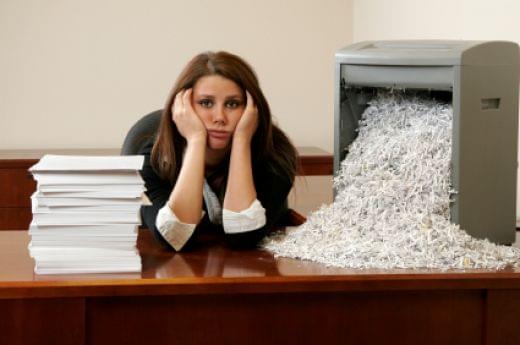 “Business phrases so quickly become clichés that they stand out in CVs,” says Tracey Herald from O2, the company who carried out research intothe phrases that recruiters are most tired of hearing. “We find that applicants can use complicated language where a simple phrase will do – such as ‘leveraging’ instead of ‘using’. CVs can also be notorious for over-claiming – there’s a fine line between showcasing your skills and positioning yourself as the next Nobel Prize winner.”

The full list of the 10 worst phrases to use on CVs is below:

The Adventures of Mr. Candidate 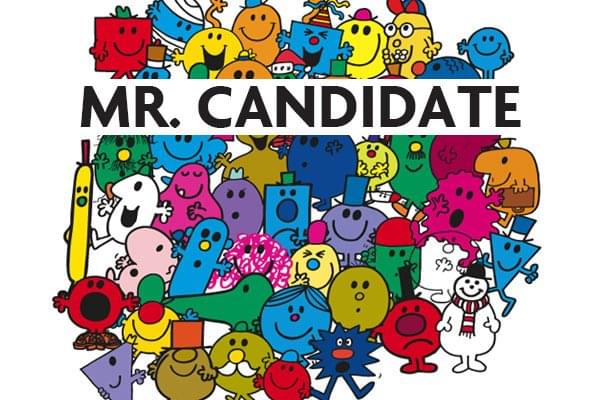 A story about Mr. Candidate, a fellow who pleads with Mr. Pigeonhole to give him a job in a sector he has been out of for years, may sound like the plot of a children’s book, but it’s actually how Tom Skinner attempted to get a job.

Skinner created a Mr. Men CV with a mixture of hand-drawings, graphic design, and text. It tells the story of a bored Account Executive who wants to follow his dreams.

He felt frustrated by the inability of recruiters to be flexible with the roles they were putting him up for. He had spent two years in corporate sales, having moved from London to Brighton, leaving a job at a social marketing agency in the capital.

The clash between the applicant’s desire and the recruiter’s judgement of their suitability is food for thought. At what point does a skill set become outdated?

“‘Please, Mr Pigeonhole’ he beamed, ‘I want to work in a creative capacity again.’

“’Hmm’ boomed Mr Pigeonhole, ‘It says here you’ve been working in corporate sales for two years. You’ve been out of the sector for too long.’

The CV then outlines his skills and achievements.

Speaking to The Argus, Skinner said: “I thought I’d take matters into my own hands and do something that would really get recruiters’ attention. It’s hard to stand out on a Word document which can easily be deleted so I made something physical to send them, something representative of my passion and imagination.”

So far he has distributed 10 of the CVs, with no answer yet.