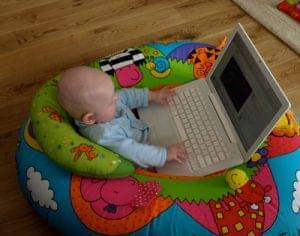 Aaron on his laptop, 9 months old

This morning I had to wrestle my iPhone from my son…. again, as he furiously tapped and swiped away in his endless quest to find more episodes of Scooby Doo and videos about diecast toy cars from the Cars movie from Pixar.  It’s a regular routine in our house: “Daddy, can I have your iPod…..NOW!”  It’s not confined to the iPhone; he watches trailers on my MacBook and plays with a dinosaur game on my mother’s iPad.  He walks up to our TV and tries to press icons on the screen, puzzled at how touch screen technology has not come to the big screen!  This has gone on for around a year now.  He’s two and a half.

I was inspired to write this article after reading an excellent article by Lauren Indvik on Mashable a couple of weeks ago entitled “92% of U.S. Toddlers have Online Presence“.  According to research from internet security firm AVG, “81% of children under the age of two currently have some form of online presence”.  This got me thinking about my own son and what the world will be like when he enters the job market in the early 30’s (wow, that sounds scary!).  I’m a recruiter and have been so all of my short professional life (13 years).  I currently train and advise recruiters on how to source people online and on how to build their employer brand in a digital world.  So this got me thinking, when my son turns 21, what will his digital footprint look like and what does that mean for recruitment in 2030?

Imagine a world where your life is documented from birth and available online to anyone willing enough to seek it out?  Your hiring manager wants you to find the brightest young computer science grads for this year’s trainee scheme.  You firstly look at your current software engineering team and analyse their online habits based on tracking software that resides on their work computers and mobile phones.  You quickly map where they hang out online in their free time and you use this data to decide what social communities you are going to target.  You then track where they physically hung out when they were in college 2 years ago based on their GPS signature and geo-location activity on their mobile device.  This drives your offline recruitment plan.

By the next day you are blogging on several new gaming and social networking sites, adding friends and contacts, writing about topics that your research suggests that software engineers are into right now.  You monitor in real time which of your activities is bearing fruit and you map this against broader technology trends to ensure that you are talking now about what people are going to be discussing tomorrow.  The CTO agrees to do a live stream broadcast for you this afternoon that you have been promoting to your target demographic by reaching out to influencers in your target social networks and through push-notification to mobile devices in your target geographical locations as part of your “offline” plan.  2 hours later and you’re reaching out to everyone who attended the webinar asking them if they enjoyed it and would it make them interested in hearing more about your organisation’s graduate recruitment drive?  You do all this on your mobile phone whilst driving across the city to get to a film shoot that you have arranged in one of your target campuses where some of the VP’s from your product development team are planning to exclusively preview your next generation products to final year computer science grads who have been asked to live blog at the event, ahead of the mainstream tech journalists who won’t get to see it until later that night.  The best of these bloggers will be invited for a tour of your facility next week, escorted by the graduate recruitment team. 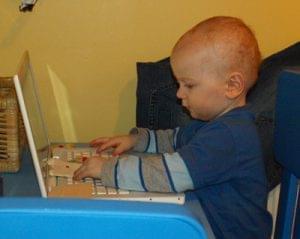 Aaron, aged 2 on the laptop (no support reqd now!)

Meanwhile you get a call from one of your recruitment interns who is finishing a YouTube video aimed at 2-4 year olds that shows the latest Pixar movie characters infiltrating a top secret lab where software engineers are designing software for flying cars and space rockets.  “Wow, working with computers is so cool” the main characters says before the 2 minute video closes with your company logo, animated and in bold, bright colors.  The video tested well and is being tagged against the most popular cartoon names to ensure that toddlers are likely to see it.  Your latest line of toys and games that allows kids to design their own fun, mobile apps are about to hit the shelves in all of the major supermarkets.  Every kid wants to be a “Super Cool Programmer’ when they grow up.

The next morning you review the first batch of video interviews that were submitted as part of a Facebook game you launched yesterday that challenged gamers to design two new characters in your most popular game franchise.  The brightest grads are telling you via video interview why they chose their characters and how they would propose to re-engineer the game to make it better.  You select the best 5 and ask the computer to mail your diary to each of them to arrange appointments this afternoon.  Your hiring manager interrupts you to get an update on your progress; you advise that the company’s grad scheme is trending on Twitter, you have added 600 new fans to your grad Facebook Page, built a new engineering community on Empire Avenue and the first 5 candidates will be arriving to meet him just after lunch today.  You’ll send on a detailed social reference on each candidate before they arrive.

Sound frightening?  I hope it sounds exciting because this is what you coud be doing today, in 2011.  I cannot begin to imagine what we’ll be doing in 2030!  Once my son makes his first million at 6 from his first iPhone App, I will have retired and won’t need to worry about it…..until he comes looking for help to expand into Asia!