Timing is everything: "When is the best time to post on X, Y and Z?"

As Forbes.com’s Ewan Spence said “marketing (and recruitment in this case) is all about the moment“. “There’s no point coming up with a witty caption or fun image the day after a major event” you need to “find the right moment” in order to successfully engage your audience and grab their attention with what you have to say and with what you have to offer. The same can be said for your job postings. What’s the point in posting the world’s best written job ad for an accountant on Facebook at 3pm on a Friday when there are no accountants on Facebook until 5pm on a Saturday?

At Social Talent, we get asked on a regular basis when the best time to post on various social networking sites is, questions like: “What’s the best time to post on Facebook for maximum views?” Well, here’s some news that may shock you: we haven’t got a breeze. You see everyone’s peak social moments are different and rely entirely on the behaviour of the individual’s or company’s followers and fans, and cannot be predetermined by an outsider looking in. So how do you determine the best times to post according to the needs of your audience? Well, that’s something we can tell you;

If you are posting your beautifully and creatively written job ads through your company’s Facebook page, take a minute to open up your company Page Insights (you’ll find it in the Admin Panel of your company page). Not only does this handy in-page analytics feature take note of your page likes, post reach and page visits but it also monitors when your fans are online and on what days the majority of your fans visit your page. 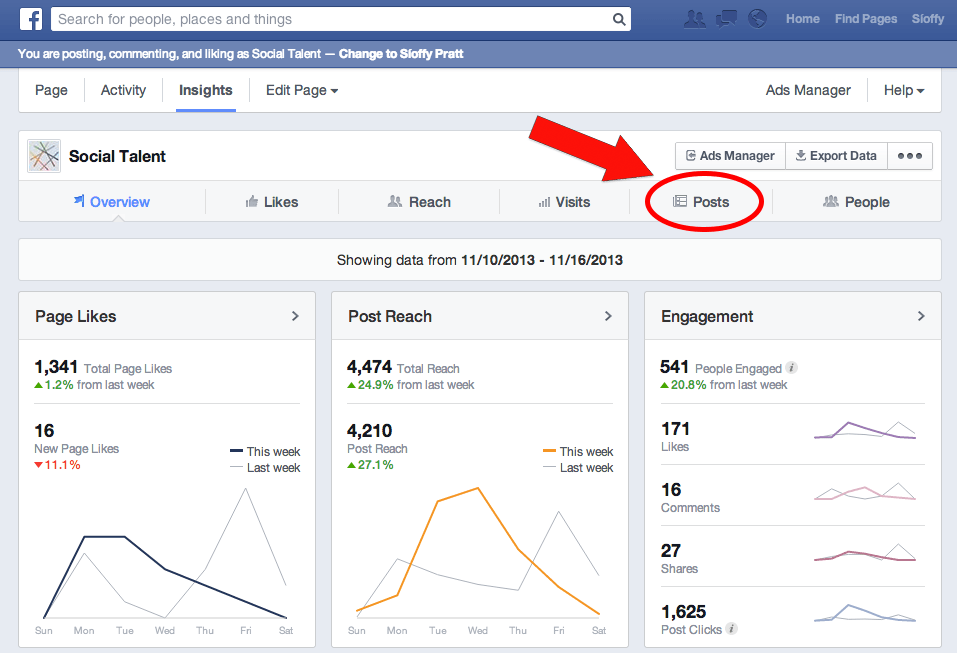 This is invaluable information to anyone looking to engage an audience via Facebook, not just recruiters posting job ads. At Social Talent we tend to post at 12pm each weekday as this is when our Facebook traffic begins to build, presumably as people start to break for lunch and come online for recreation. As the kind of Facebook activity we tend to post is humerous and picture based we feel this also works well with the lunchtime audience we tend to draw. Your insights may show you that most of your fans tend to login and browse early in the morning probably on their commute. In that case, news items may work well in that slot as people try and catch up in current events before heading into the office where they may need to discuss such topics. It’s important to bare in mind however, that most people are not likely to check their Facebook during work hours unless they are using social media as part of their job.

Essentially, Twitter is all about connecting the right customers with the right context, at the right time. Everything happens in the moment on Twitter. Thankfully, there are a number of apps now designed to tell you exactly when you should be tweeting according to the habitual patterns of your followers and your interactions with them, but as with a lot of things, the best ones require you to fork out some cash if you wish to enjoy all of their benefits. SocialBro and HootSuite are two of the best paid products in this category and if you have the budget you should invest in them. But before you put your hand in your pocket, don’t forget that both options do offer a 15 and 30 day free trial respoectively, which may (or may not) be enough for you to get a handle on your followers current timing schedule without paying a cent.

If you’re looking to do things on the cheap, the best free Twitter timing product on the market is Tweriod. Tweriod is a free app that helps you make the most of Twitter by letting you know the best time to tweet. All you need to do is submit your account details and within an hour Tweriod will deliver your personalised report straight to your email inbox. What’s even better is that Tweriod has the abilty to sync with Buffer, another great free app that let’s you schedule tweets, so that you are always posting at exactly the right moment for your followers to see and fully appreciate what you’re saying. 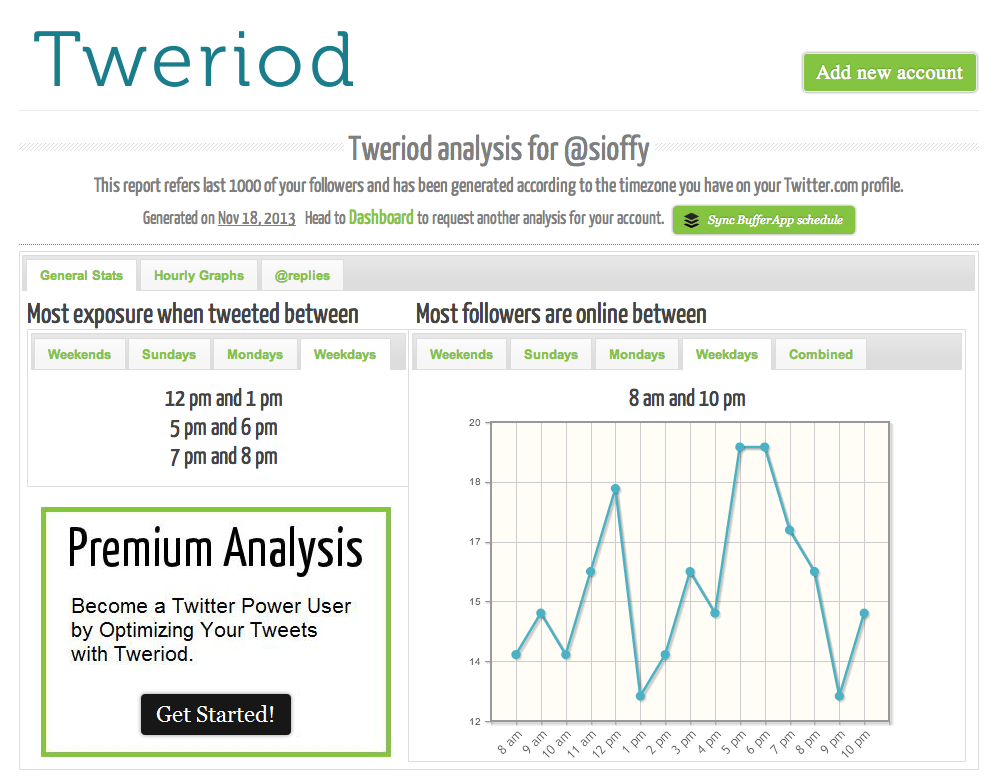 Beyond Tweriod’s suggestions, it’s also important to follow Evan Steven’s 3 P’s: Predict, plan and push. Predict the various outcomes an event can have e.g. a sporting match, plan a tweet or series of tweets around it that refer to the event but also incorporate your message cleverly and then push the tweet when everyone is ready to listen i.e. when the final score of the match is announced. By tweeting relevant topics and job ads exactly when your audience are online and when they’re chatting about an unfolding event, you can’t fail to grab their attention.

Unfortunately, there is no scientific way to determine when to post on LinkedIn, but as you are trying to target job seekers with your ad postings use some common sense. Post early in the morning (between 7-8.30am or in the evening after work (between 5-7pm). Many job seekers will not want to draw attention to the fact they are looking for a new role elsewhere so they will stay off the network during work hours but will peruse outside of work before they make their way in to the job they want to leave or after a day at the job they don’t want!

Posting your jobs to Google+? Well it’s time you discovered the aptly named Timing+ app. After quickly analysing the engagement levels your previous posts have received, the Timing+ app determines what time is best for you to post, ranking the most popular hours and the most popular days. 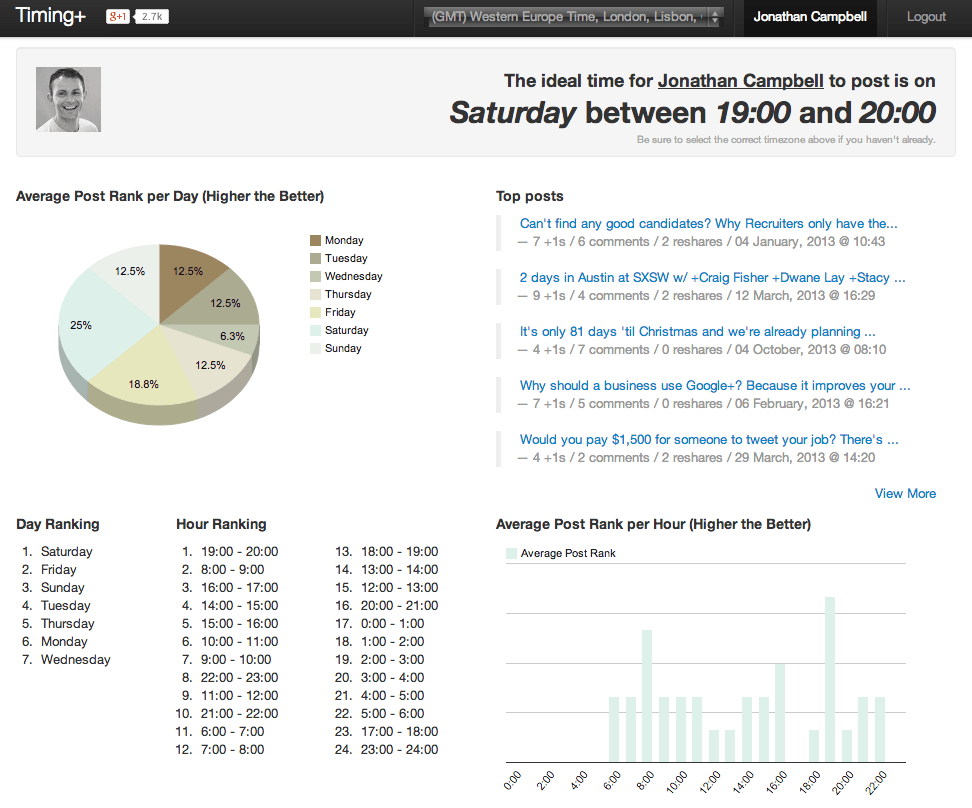 Even though Saturday between 7pm and 8pm may be be the most popular day for Johnny to post, as in the example above, it’s important to keep in mind that the second best time will be Friday between 7pm and 8pm. Johnny’s second best time to post is between 8am and 9am, so he should be posting at these times on also. You may find that the most popular time for your Circle members to be online is between 2am and 3am on a Monday!

So what are you waiting for? Discover your optimum tweet moments, find your perfect Facebook post time and locate your Circles’ happy hour on Google+. There’s no time like the present! (See what I did there?)