The language of diversity with Salma El-Wardany

“Language informs behavior. How we speak informs how we treat people.”

We all know the power that words occupy, particularly when it comes to diversity. Used wisely and with compassion, they can make people feel included and at ease. But, words also have the capacity to cause offense, even if that isn’t the intention. And with the language surrounding diversity being so nuanced, it can often feel incredibly overwhelming to get it right.

While many of us may understand the importance of putting pronouns in titles or feel comfortable using terms like non-binary, for others these could be entirely new concepts. We recently had the pleasure of speaking with Salma El-Wardany about this topic of language and diversity. Her core advice? Strip it back. Make the language, and knowledge surrounding it, accessible and safe. 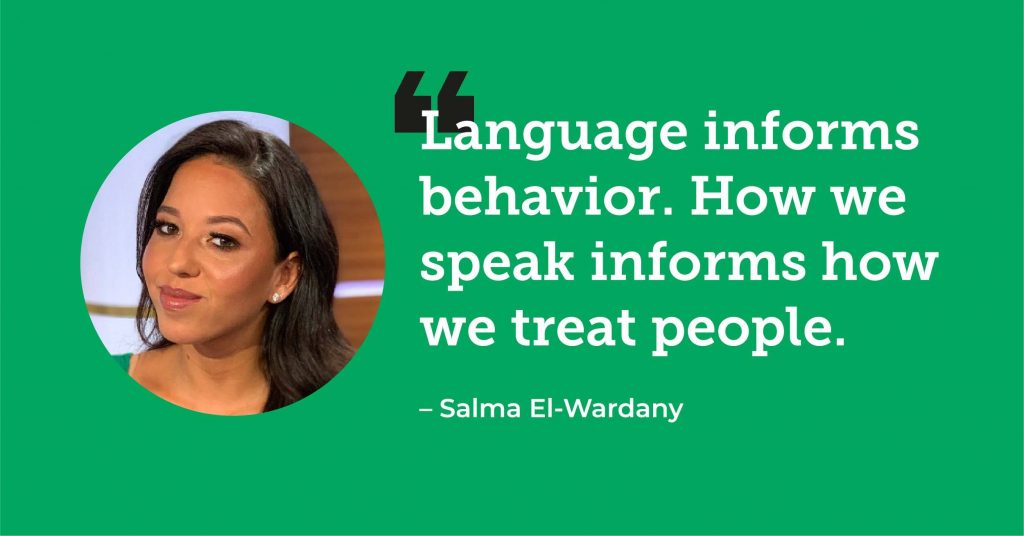 Do you say “a diabetic” or “a person with diabetes”? It may seem like such a slight difference in language, but there’s a powerful reason why the latter is much more appropriate. It is so important when speaking about diversity not to define people. It’s not “the deaf person”, it’s “the person with an auditory impairment” – it’s part of who they are, but not the defining feature. Humans are far too complex and wonderful to be limited by language like this. When speaking with Salma, she made the point that this people-first approach should be applied to EVERYTHING we do in terms of diversity, be that strategies or cultures, it has to center around the person. And with us working in the talent sphere, where people are the commodity, it should be only natural that we lead on causes like this.

As we become more inclusive, we need to keep thinking about the language we use and how we communicate. We must evolve with language and modify it accordingly. Just look at this article from Fast Company on the use of the word “guys” in society. Salma pointed out that even the most diverse and inclusive of us have used this word. But that doesn’t mean we shouldn’t try to adjust and adapt our vocabulary so it does a better job of reflecting and including all our peers.

One of the most problematic turns of phrase in the recruitment industry surrounds the idea of culture fit. This notion that we hire a person based on how well they adhere to an established status quo is an example of how language can directly feed a trend that excludes so many people. According to Salma, it’s incredibly damaging for the DNA and make-up of a workforce. Culture fit leads to homogenization – an office or team composed of people who look and sound alike, come from similar backgrounds and operate on uniform wave-lengths. Instead, reorientate your vocabulary and advocate for a culture ADD. Find people who will bring a positive difference to your teams. People who don’t necessarily have the same view of the world as everyone else. And your business will thank you for it. There has been so much research done on this, and Salma confirms it. Diverse organizations far outstrip others in terms of innovation, creativity, experience and the bottom-line. Take a glance at this BCG report for example – in a survey of over 1700 companies of varying sizes across eight countries, those with increased diversity clocked a 19% higher revenue!

Want to learn more about culture add? Download our eBook!

According to Salma, “one of the most powerful emotions on every side of the DE&I debate is fear.” There is fear that DE&I is a flash in the pan, there is fear of causing offence, fear of not having space, fear of the unknown – it pervades so much of the discourse. And this fear is most certainly seeping into the language of diversity as people can be tentative or poorly informed. But there is no shame in not being as far along on the DE&I journey as others. Just tread gently into the space. You don’t have to be the loudest voice or have all the answers. You just have to show respect and good intention. It’s not rude or unprofessional to ask and learn, in fact, Salma believes it is the best thing to do. Fear and shame can be debilitating and won’t help to progress the DE&I movement in any workplace. 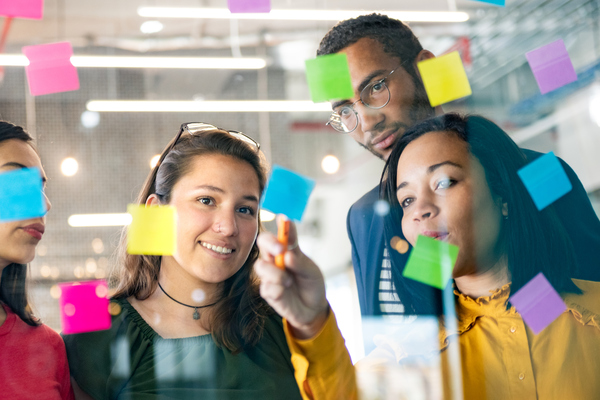 One of the challenges associated with language and diversity is sourcing knowledge. While people may be open to learning more about DE&I or have a desire to expand (or correct) their vocabulary, it can be a mission trying to find this information. But this doesn’t mean you shouldn’t try. Salma is a big advocate for picking a medium that best suits your learning style. She says there’s no point recommending books if you’re not a reader, or lining-up documentaries if they’re not normally in your repertoire – choose whatever medium is most comfortable for you. One that is often overlooked that can suit a vast number of us is social media. Salma gave the example of following DE&I centric accounts on Instagram, like Rachel Cargle, who package up information in an easily consumable format that will then be in your eyeline every single day. It ingrains diversity, equity and inclusion in your consciousness and also allows you to be part of the conversation. It’s a perfect approach to learning and building your awareness.

Salma told us that “one of the biggest failings of the DE&I space is assuming everyone knows what you know.” This is especially true when it comes to language. Things like generation, bubbles of exposure and circles of influence can all deeply impact a person’s level of understanding when it comes to diversity. So it’s important to make allowances. It’s important to acknowledge a person’s willingness to grow. And, it’s important to create a space where it’s comfortable to ask the uncomfortable questions. Language is a living, breathing, moving thing that holds immense power – so let’s keep trying to get it right.

Salma El-Wardany is a writer, speaker, BBC radio presenter and founder of Digitally Human – a marketing business that works with companies to attract diverse talent and build inclusive employer brands.

Salma is also one of SocialTalent’s resident DE&I experts on our learning platform. If you’d like to hear how we can help your organization improve its approach to diversity, equity and inclusion, get in-touch!

Our lives are measured in moments, and peak moments are the ones that…