The new world of succession planning, with Roopesh Panchasra

When we think about executive recruiting and succession, the model often follows a very traditional route. It’s one that generally focuses on headhunting talent outside the company with the experience deemed necessary to fulfil a role. But there is an element of this process that is often overlooked at the detriment to success – internal mobility.

We recently spoke with Roopesh Panchasra, the Global Head of Executive TA at Uber, about this, and according to him, we need to put more emphasis on looking at our internal executive communities. From intentionally developing this talent to recognizing the transferable skills and behaviors needed for succession, Roopesh shone a light on this oft-forgotten path to leadership. 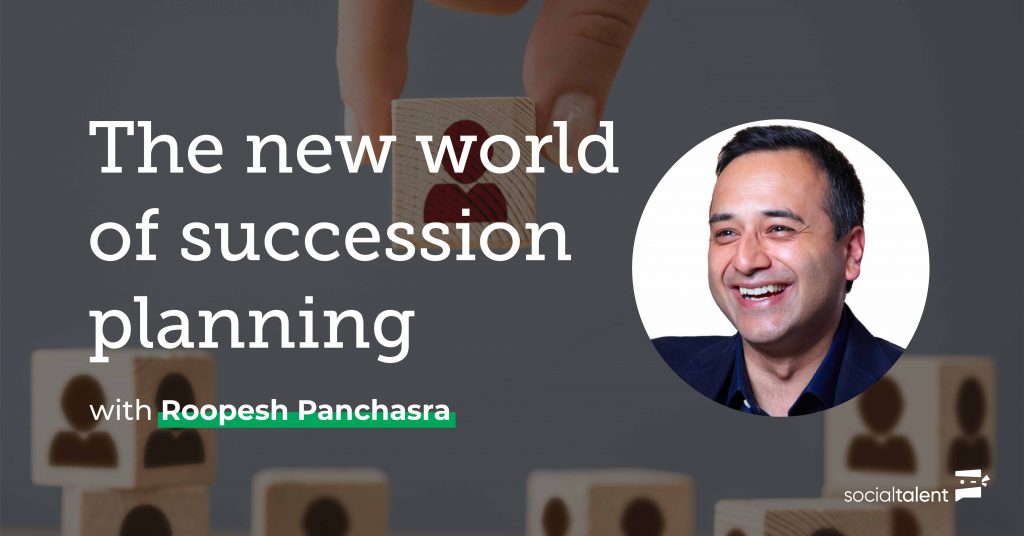 The downfall of traditional succession

When looking at succession, Roopesh believes that many organizations follow a very traditional approach. “How a lot of companies handle, look at and craft succession really hasn’t changed,” he told us. And even though new tools and technologies have been added to the mix over the years, there is still a recurring failure to pay attention to succession and strong pipelines early on in proceedings. “Generally speaking, it’s not an area that many companies do well,” Roopesh says, which is incredible considering how important it is to get the right person at the helm. According to a recent HBR article for example, badly managed CEO and C-suite transitions in the S&P 1500 can cost up to an eye-watering $1 trillion a year!

There is often an element to traditional succession planning that transforms it into an act of branding also. Prominent companies want to have prominent CEOs. Why? To send a potent message to the market about their organizational calibre. And there is a tendency to believe that this can only be achieved by looking externally, which isn’t true, and belies what’s most important about the process – finding the best candidate for a demanding position.

Internal mobility isn’t a silver bullet for guaranteed success, but it is an often undervalued and underutilized source. In fact, in Roopesh’s view, both external and internal search needs to be conducted concurrently if you are to give yourself the best chance of finding the right person. Different situations require different approaches. If a fresh breath is required in an organization, then perhaps new blood can provide this? But if it’s stability and institutional knowledge that’s needed to steady the ship or continue progress, an internal candidate who has been teed up for the position could prove to be the winning choice. One doesn’t necessarily trump the other. Yet unfortunately there does seem to be a trend towards external as being the preferred option. It’s a shame, because to deny internal candidates is to deny a whole other pool of potential talent.

Even in companies that do consider internal candidates for prominent positions, there are some recurring shortcomings that often crop up. Roopesh has identified two in particular. The first surrounds an issue of immediacy bias. When shortlists are made, it usually comes down to known quantities, or people who are within a circle of trust. Without a wide scope on ALL talent within your company, it’s impossible to target an equitable overview of potential. The second barrier is what Roopesh refers to as “the readiness level.” These are the arbitrary conversations that executives have over a person’s current ‘readiness’ status in relation to a particular leadership role. Decisions are made with no objectivity and without any actionable or structured plans to ramp-up development to bring people up to this perceived required level. It breeds unease and a sense of bias amongst the employee base.

To counter these shortcomings, Roopesh advocates for opportunity and transparency. “There are always going to be more candidates than jobs,” Roopesh says. The risk of attrition is unfortunately going to exist. However, a lack of transparency about the processes will only amplify this. Being clear and constructive and offering opportunities to bridge skill and experience gaps shows fairness in the approach to succession. It builds trust. And even though these conversations are difficult to have, it garners more respect, giving executives clarity on what’s needed to reach the top echelons.

One of the key drivers for external hiring revolves around previous experience as a predictor of future success. Quite often when a candidate has simply done a similar job at another organization, this translates to a perfect fit. But this is only on paper. As Roopesh puts it, “experience gives you the right to read for the part,” but it’s not the only indicator. Things like behaviors, attitudes, ability, intuition, will – there is huge correlation between these soft-skills and success as a leader. And companies need to focus more on these when determining fit than a previous job title.

Now, of course there are exceptions to this. As Roopesh points out, surgeons or engineers need certain levels of specific experience to truly succeed. But often, in other senior-level areas, it’s not as clear-cut. “We know there are no two jobs that are the same,” Roopesh says, every role is affected by technology, infrastructure, other people, or any variable that could cause a difference. So it’s vital when selecting a successor to not fully base your decision on past performance in a similar position. Throughout your career, you generate what Roopesh calls leadership currency – these are moments and examples that highlight why a person could become a successful leader. And identifying these nuggets of gold, be it, for example, a proven ability to be empathetic or a consistent desire for betterment, can sign-post you towards making the most effective hire.

Roopesh concedes that there is “no exact science to succession,” but there are best practices, and many companies fail to see the whole picture. The ideal leader isn’t always the shiny, big-name doing the same job for another organization. It could be an internal candidate, one who has been developed and identified as the right-fit for taking a company in a positive direction. And, according to Roopesh, to fully accomplish this holistic view of succession planning, you need to ask yourself: “who is your talent broker for internal candidates?” Much is done to leverage and convince external competition, but are you doing the same for star candidates internally?

Want even more insight? Catch Roopesh’s full episode of The Shortlist below. It’s an essential watch for anyone involved in executive search.

Is your organization looking to optimize its approach to hiring? Get in-touch with us today. We have missions and courses dedicated to every aspect of recruiting. And before you go! Don’t forget to sign-up to our newsletter and follow us on LinkedIn.

How to Deal with Stress as a…

Over the next few months, we will be introducing our new Leadership Training…