7 Twitter Lists Clever Recruiters Use to Boost Their Recruiting Efforts 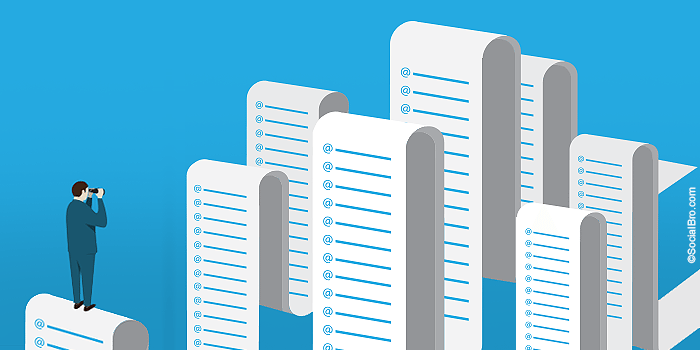 “If you haven’t unlocked the power of Twitter lists, you are missing out on a powerful resource to help achieve your recruitment goals,” says Blogging4Jobs author, Audra Knight. And we strongly agree! Twitter is a powerful recruiting tool and Twitter Lists are one of the most untapped resources the site offers its users.

‘But what is a Twitter list and how can it possibly be as useful and effective for managing and optimising your Twitter experience?’ , I hear you shout. Well, a Twitter list is a curated group of Twitter accounts you can use to organise and sort your interests, activity and followers on Twitter. You can create your own lists or you can subscribe to lists that others have created. When you view a list, only tweets from the users added to that list will be visible e.g. if you just wanted to see tweets about Leicester football club, you could set up a Twitter list containing only Twitter accounts relating to Leicester FC. Every Twitter user can create up to 1,000 lists and up to 5,000 members can be added to each of those lists. Every user also has the option to make their own lists private or public. Public lists can be subscribed to by anyone, whereas private lists are only able to be accessed by the person who created them.

Ok, so now that you know what Twitter lists are and how they work, it’s time to discover how recruiters can take advantage of and utilise Twitter lists and, more importantly, which specific lists are of most use to us:

7 Twitter Lists Every  Recruiter Should Create and Start Using:

The following lists should be for your eyes only.

Keep an eye on what they’re doing by adding them to a dedicated Twitter list. There are a couple of reasons for doing this:

“Keeping track of the people that are mentioning you on Twitter is a smart way to track and keep up with potential leads”, says the folks over at Agora Pulse, which is why they advocate setting up a Twitter list of all the people who mention/retweet you personally, your business or a particular hashtag that is of relevance to your company.

Think about it, if a person regularly mentions or retweets you or your company they’re engaged with your brand. They trust and respect the content you post so implicitly that they’re willing to share that information with their own friends and colleagues. Acknowledge them for that and interact with them on a regular basis. Who knows, they might just be the perfect fit for your next role.

“You can learn valuable insights into their work and personal life that will help you reach out to them in a way that gets a response,” says Blogging4Jobs writer, Audra Knight, of Twitter. She advises recruiters to make the effort to create a list that “includes people you’ve sourced on any platform and found to be a possible fit for your company”, so that you can do some more research into what makes them tick and the best way to reach out to them in advance of making the first move.

Knight also suggests utilising a passive candidate Twitter list when it comes to applicants or sourced candidates who didn’t quite get the job. “Remember the applicant who was a close second for your software developer job? Keep up with their activity and never miss a chance to engage with them,” she says. After all, the perfect job for them could spring up tomorrow and when it does you’ll be in a perfect position to contact them immediately.

“If your employees are big on Twitter, why not add them all to a list?” says Lauren Dugan from Adweek.com. “This way they can network together, and you can show off your employee’s social media savvy to potential clients or customers”, or in your case potential candidates. And the idea has definitely worked for Sprout Social: “At Sprout, we’ve curated a list of Twitter handles for everyone on the team. This way, we can all follow each other and continue forming the company culture by encouraging interaction. It also allows customers to see the people behind the product and develop a deeper connection with our brand.”

Not only does it help their current employees to have a staff directory on Twitter, but Sprout Social also use the list to showcase the staff they’re obviously very proud of to any potential candidates that come looking. They use their staff as a living, breathing advertisement for how vibrant and exciting a company Sprout Social is. Furthermore, “sharing employee generated content is a great way to your support and encourage advocacy”, says Audra Knight. “Employees can be a fantastic asset to your recruitment efforts. You will miss those tweets in your stream if you simply follow your brand advocates without adding them to a list”.

If you’re attending an industry event specific to your recruiting niche, not only is this a great way to keep on top of all the tweets with insights from the day, but it’s also a great way to build a talent pool of potential candidates. Think about it,  almost everyone who attended the 3XE Digital Content Marketing and Social Media conference in Dublin 2 weeks ago is a content marketing or social media executive. If you’re a recruiter looking to find great content marketing and social media candidates on a regular basis you want to know everyone who attended that event!

The easiest way to do this is to set up an IFTTT that will automatically add everyone who uses the event hashtag into a Twitter list for you. We’ll explain how to do this a little later.

6. Helpful Resources for your Candidates

The ultimate goal of all content marketing is to “move” the customer (or in this case, candidate) in some way with epic content. Epic content is content that positively affects the candidate by helping them to address an unmet need or answer a question they’ve been pondering for a while. So, what better way to grab and hold your candidate’s attention and respect then by creating a Twitter list full of helpful resources for their job function? For example, if you recruit lots of social media managers, why not create a Twitter list entitled “Invaluable Social Tools” and include in that list the Twitter accounts for the likes of Buffer, Hubspot and The Social Media Examiner. Think of what type of resources your customers might enjoy having and which of these resources you could help create e.g. a list of content marketing thought leaders you believe every content marketer would benefit from following.

Once you’ve created your helpful resources list, shout about it! Tell your followers you’ve created this super handy list and utilise any hashtags associated with the list’s topic to do so. Oh, and don’t be afraid to mention the usernames of some of the key Twitter accounts on that list in your promotional tweets (they may retweet your tweet and spread the word to even more potential candidates. Result!)

P.S. You can see who is subscribing to your Twitter lists by visiting the specific list, and clicking the List Subscribers link in the left sidebar. Subscribers of your resources list should all make interesting potential candidates. You know what they say, build it and they will come!

7. Attention Lists You’ve found the perfect JavaScript Developer. They have all the skills you need and they would appear to be a great culture fit for your organisation. The only problem is, they haven’t responded to your efforts to reach out via InMail or email. What do you do next?  Audra Knight says, “try getting their attention by creating a list with a clever name such as “Best JavaScript Developers – USA”. Once you have added them to the list, they will get a notification from Twitter telling them you have added them to this list and “may appreciate your unusual efforts to engage them”.

A4 I give my Twitter lists HIGHLY complimentary names so people smile when they get notification that they were added. #TwitterSmarter — Chaim Shapiro (@ChaimShapiro) March 31, 2016

Ok, now that you know which Twitter lists you should be utilising, it’s time to find out just how you set up a Twitter list in the first place!

As the rather violent saying goes, there is more than one way to skin a cat. And while I assure you that no felines were harmed in the making of this blog, I would like to also stress that there are a few different ways to approach building your Twitter lists: 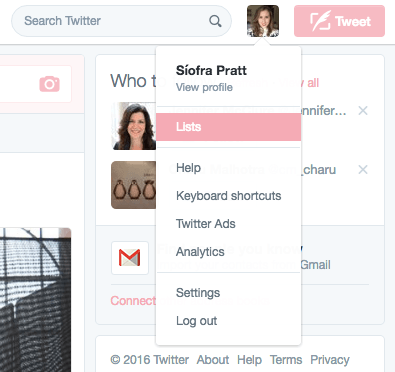 To add a user to that list, go to their profile (you don’t have to be following the user to add them to your list), and click the gear right next to the follow button. You will see a list of possible lists to add the user to. Click the box next to the name of your desired list. And you’re done.

IFTTT has 6 pre-made recipes for setting up Twitter lists, however, we recommend setting up your own: 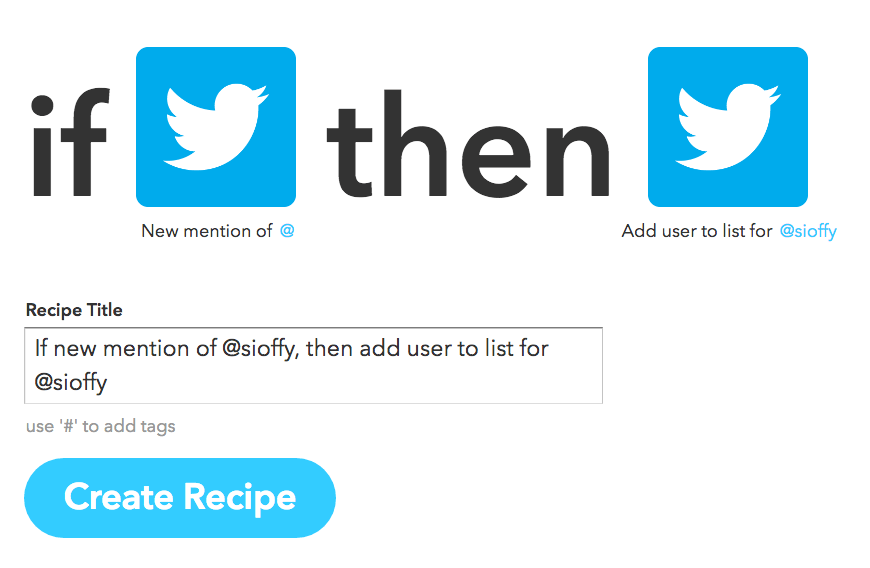 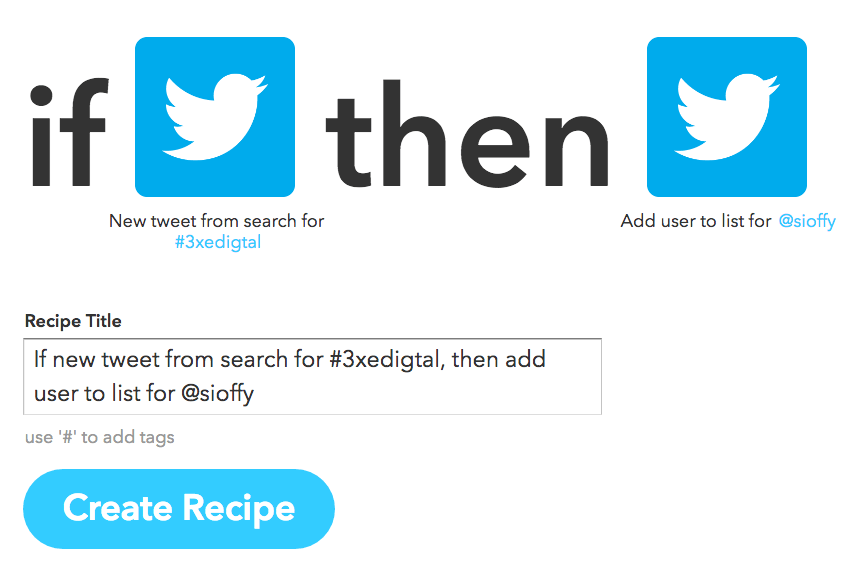 By setting up recipes, they can create Twitter lists based on whether someone mentions them on Twitter or what they favourite.

This Chrome extension lets you quickly build Twitter lists from any timeline view. The ‘List Builder for Twitter‘ extension by ElectoralHQ is especially useful for events and conferences where you want to build lists of people tweeting using the hashtag.