According to a new survey of 2,000 UK adults carried out by the infamous, Ripley’s Believe It Or Not! attraction, many of us rational human beings still believe in a whole host of myths, legends and fables. However, many of our deeply held beliefs are simply misconceived.

For example, the most commonly held mistaken belief is that bananas grow on trees, when they are, in fact, plants. Second in the poll of myths we hold to be true is that we have 5 senses – sight, sound, scent, touch and taste – but this is also wrong. In addition to these 5, neurologists also count pain, temperature and mechanoreception – which covers balance and other functions – as senses. While other myths still commonly believed include the Loch Ness monster, Elvis is alive and Paul McCartney is actually dead.

This got us thinking. There must be a similar list of recruitment myths circulating around our industry that many recruiters still believe, but in truth, there is no basis of fact. So, we went to work identifying these fables in an effort to set the record straight:

I hate to break it to you but, no candidate will ever truly have everything you need *and* be in your salary bracket. When it comes to finding the “perfect candidate” or as close to perfect as you will ever get, a good eye for cultural fit and flexibility in relation to the specified job duties is key.

At Social Talent, we conform to Peter Schutz’s philosophy: “Hire character, train skill”. In other words, it’s not all about just having the right set of skills. Someone could be the most talented individual, but if they don’t have the right set of values and character they won’t fit into your organisation. Specific skills, knowledge and understanding can be taught and easily learnt by a person, but the right personality, demeanour, experience, drive, adaptability, propensity to learn, problem-solving ability and creative thinking is inherent.

2. There are no good candidates! 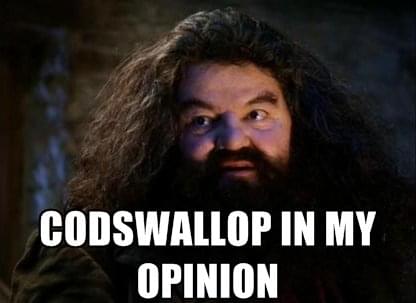 Codswallop! There are plenty of really great candidates out there ready to be found, you just haven’t found them. And if you can’t find them, it’s down to something you’re doing wrong or a lack of imagination when it comes to knowing where to find certain candidates.

3. Hiring managers will make the best decision on which person to hire.

Our preconceived biases affect every single decision we make and unfortunately, unless you have robust bias-reducing processes in place, your Hiring Manager’s own biases will have a bearing on the candidate they select for hire.

Bias is an inclination or prejudice for or against one person or group. In other words, bias are unconscious feelings we have towards other people – unconscious feelings that play a strong part in influencing our judgement of certain people and groups, away from being balanced or even-handed.

So how can you deal with bias and try to limit its effect on your and your Hiring Manager’s decision-making during the recruitment process? Well, one of the best ways to look at your bias is to use what’s known as the Harvard Implicit Association test – an online assessment you can take for free to discover your unconscious bias. Take the tests (the gender one in particular), and find out how much or how little bias you have towards different members of society. By discovering your unconscious bias you develop an awareness of them and open yourself up to change.

For more ways to combat unconscious bias in the recruitment process, download our free white paper, “How to: Increase Diversity Through Improved Recruitment and Hiring Processes“.

4. Years of experience is a really core metric of competence and should be taken seriously by every recruiter.

If you were asked to find someone with say 5 years experience, would you really discount someone with 4 and a half? I didn’t think so. It’s important that you fully understand what’s needed and expected of the candidate in the role you’re trying to fill. Don’t overlook the best applicant for the sake of silly details.

According to Greg Savage, this myth has been viciously spread by “tech-legend wannabes, internal recruiters with a barrow to push, disaffected clients, and a host of other misinformed or biased loudmouths” for the best part of 12 years now since the introduction of LinkedIn. But, it’s just “total nonsense”.

Yes, there’s no denying that technology will and has changed our industry over the last number of years, but agency recruitment is not dying. In fact, according to Greg, it’s actually growing.

Recent APSCo research tells us permanent vacancies in the UK increase 26% year-on-year, there has been growth across all sectors with engineering steaming ahead, and contract vacancies rise by 7% year-on-year. Furthermore, the British jobless rate came in at 5.1% in the 3 months to January 2016, the same as in the previous two periods, staying at the lowest in nearly 10 years. In Australia, the most recent Bullhorn Australian Recruitment Trends Report tells us that 86% of APAC recruiters expected to increase revenue in 2015. 84% expanded their headcount in 2015. While 64% of agencies with 75 or more employees planned to open new offices in 2015.

So, you can hold off on erecting that headstone lads!

Anyone, I repeat, anyone can find great candidates (provided they have the sourcing skills to do so). Once you’ve found those candidates and you begin to engage with them, having the word senior in your job title won’t automatically give you credibility over and above anyone else – especially in the eyes of the candidate.

If you’re a senior recruiting consultant but you can’t keep up in a conversation about Java with a potential Senior Java Developer candidate, you will not convince them that you’re the right person to trust with finding them the perfect role. But if you’re a junior recruiting consultant who can, you stand a much better chance of developing a good relationship with and placing that candidate.

Credibility and authenticity will win out over seniority every time.

I will say this only once… post and pray is NOT a viable recruitment strategy! Our data suggests that post and pray recruiting strategies — the method of recruiting that relies on posted job ads to generate “enough good applicants” — are adding to an already overloaded applicant queue and more often than not, generating the wrong applicants.

Take the results of our 2016 Global Recruiting Survey for example. 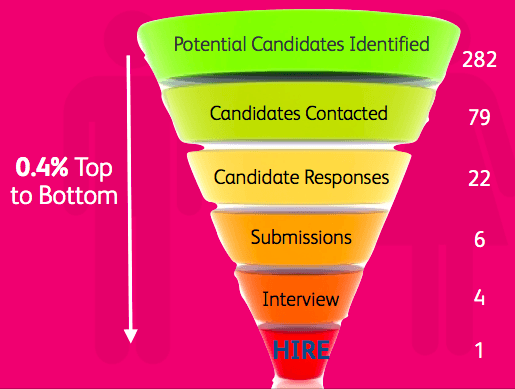 Across our nearly 1,000 respondents, we found that the typical recruiting funnel converts candidates to hires at the dismal rate of 0.4%. That means the average recruiter needs to find a whopping 282 people in order to make just one hire. Yet, thanks to the post and pray strategy that many recruiters still employ, nearly three-quarters of these are not qualified or suitably relevant for the position.

There is a significant amount of wastage in the average sourcing funnel! Quite simply, recruitment professionals are not as effective in the early stages as they should be in identifying and engaging with well-qualified candidates. However, this shortfall can be overcome by writing better job ads using SEO and executing smarter searches at the front-end of the process and narrowing down that funnel of candidates.

Even if you’re not an SEO superstar, you can improve your job listings. Put yourself in the shows of the ideal candidate and write as if you were talking to them. What would attract them to the job? What would excite them about working for your company?

For a full guide on how to write really great job ads, download “The Ultimate Sourcing Ninja Guide to: Job Advertising“.

Once you have established the skills and attributes needed it’s time to start your LinkedIn search. High performing recruiters use LinkedIn Advanced Search 4 times more often than average performing recruiters (which means you should not be using the top bar on LinkedIn’s homepage to conduct candidates searches), and they utilise the power of Boolean search strings twice as often as average recruiters. High performing recruiters will spend time creating a comprehensive Boolean search string containing all of the keywords relevant to the role they’re recruiting for (skills, specific software, location etc.), before implementing that string into a LinkedIn Advanced Search. The result? A smaller number of more relevant results, with candidates based in the right location and possessing the right skills and experience.

8. Referrals are better than candidates who apply for the role.

We all know the facts about referrals. That 40% of all candidates put forward via employee referrals are hired. That applicants hired from referrals start their new position an average 10 days faster than their counterparts. That on average, 47% of applicants hired from referrals stayed loyal to a company up for 3 years or more. That 70% of employers say referred hires fit the company culture and values better than those from other sources of hire. And that 67% said the recruiting process for referrals is shorter. There is no denying that the case for employee referrals is HUGE.

But, some recruiters seem to be of the opinion that candidates who apply for open roles are of a lesser quality than candidates put forward by current employees. Their opinion is wrong.

Candidates who apply for your role (especially if you’ve taken the time to write your job ads correctly), have found YOUR job ad using the keywords YOU stated, meaning they should be relevant for the role if you’ve done your SEO properly. They’ve read the specific list of skills and attributes you’ve discussed with your Hiring Manager and stipulated they need to have in order to be successful in the role, and felt their skill set matches up. They’ve listened to what you’ve said about life in your organisation and felt they would thrive in that environment, surrounded by those people. This candidate sounds pretty good to me!

In short, there us absolutely nothing wrong with candidates who have applied to your open roles as long as you’ve done the legwork when it comes to creating your job ads (see point number 7).

So there you have it folks, 8 recruiting myths well and truly, busted. How many did you believe to be true? Are you surprised by some of the myths we’ve included in our list? Do you have any of your own myths to add to our list? Drop us a comment below or tweet us @SocialTalent with your thoughts and opinions.