Is Anyone Succeeding in Trying to Hack the Skills Gap?

Most people don’t mind a good-natured debate about the economy. But bring up the topic of the skills gap and everyone starts getting skittish, especially job seekers and employers.

For them, the skills gap is no academic matter, but rather a nasty aggravation they face on a daily basis Jobseekers complain they can’t get hired for the skills they have, while employers gripe that they can’t find enough candidates with the skills they need.

What makes the problem uniquely troubling is that it is set up to be practically unsolvable. “Economics 101” assumes that demand for labour and supply of workers are created in fundamentally incompatible worlds, and according to separate purposes. The only way the two can meet is in a massive pileup on the labour market.

Putting the Job Market at The Core of The Problem

There’s no denying that real gaps exist in the workforce. But we also believe the whole skills gap argument takes a backwards approach. It assumes the problem begins with market factors, inputs, and technology, and marches headstrong into a job market doomed to fail at matching job seekers and openings.

The problem begins with the job market but that’s not where it ends. The fault between job seekers and employers is created from the very beginning, just as the two engage in the market.

New research published by LiveCareer in its 2018 Skills Gap Report reveals a serious void between the skills job seekers say they are offering on their resumes and the skills employers say they require in their job advertisements. Where the resume meets the job ad is precisely where the rubber meets the road for employers and job seekers. And both start off already veering from side to side.

LiveCareer analyzed several thousands of resumes and job ads across 12 separate occupations. Natural Language Processing was used to analyze the actual language job seekers and employers use to communicate, at the very point where the two start talking business.

The purpose was to determine what the two sides say and mean with their job market language and whether there is a disconnect. If there is any discrepancy in what either says or means, the result will always be either a bad hire or no hire.

And that’s just what the research found. Neither jobseekers nor employers approach each other with the right ingredients to make a good deal. On average, job ads list 21.8 different skills they require of candidates, while jobseekers include only 13 skills on their resumes.

The deal prospects get thinner again when trying to match actual skill sets. Jobseekers match only 59 percent of hard skills and 62 percent of soft skills on their resumes compared with what employers list in their job ads. Soft skills account for one-quarter to one-half of all skills appearing in job ads and tend to be undervalued by jobseekers. 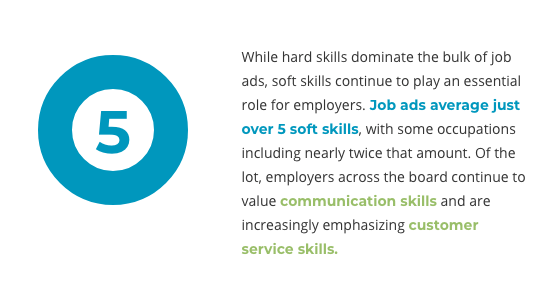 However, the study found that both tech- and soft-centric job ads were heavily weighted toward hard skills, which throws off job seekers.

No employer can hope to tackle the skills gap successfully through any kind of broad brush solution. A good place to start is with solid techniques to correct where you’ve been misconnecting with good candidates. Avoid rigid, rote-automated keyword analysis when screening resumes. Allow for greater nuance in keyword searches. And go a little harder on the soft skills in your job ads and a little softer on the hard skills.

Employers, recruiters, and hiring managers can locate additional findings, plus a PDF download of the full report:  2018 Skills Gap Report.