Did you know that Walt Disney was once sacked from his job for “lack of ideas and imagination”?! Or that Robert Redford only found his way into the acting business after being fired from an oil refinery for sleeping on the job?! No? Then take a journey back in time and discover more of history’s famous hirings & firings: 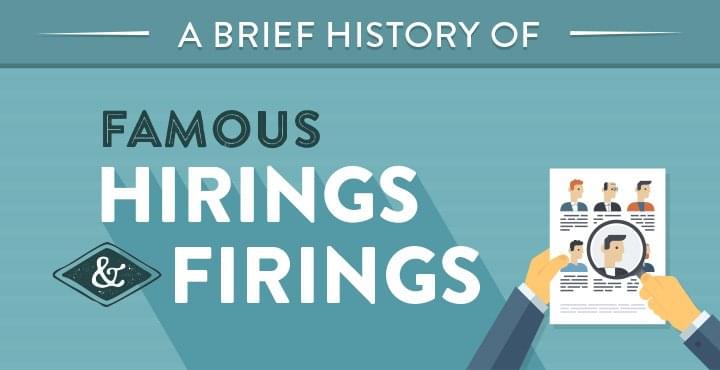 This timeline has been produced by Next Generation Recruitment.

Famous hirings and firings to watch out for:

Hired by King Ferdinand and Quenn Isabella of Spain to chart a western ocean route to the Asian spice markets, Chris ended up discovering America instead!

After overthrowing the Government, the French citizens decided to give the King the ultimate sacking – by chopping off his head!

Sacked by the San Francisco Examiner editor who told him “I’m sorry Mr. Kipling, but you just don’t know how to use the English language“.

Sacked by one of his first employers for “lack of ideas and imagination“.

sacked by the producers of the Grand Olde Opry in Nashville who felt his singing wasn’t “country” enough. They urged him not to give up his daytime job as a truck driver!

Sacked after two years of drumming for The Beatles just prior to the recording of their first album.

Hired after Best’s unceremonious sacking and became the luckiest man in the UK with the release of The Beatles first record in 1963.

Sacked by the editor of Harpers Bazaar because they felt her photo shoots weren’t innovative enough.

Sacked from her job as a researcher for Amnesty International for spending her working time writing stories about a boy wizard.

Island Records took a chance and signed a little known band from West London. A few years later they had reintroduced the world to soulful and energetic folk rock music.

Hired to replace Charlie Hunnam as the character of Christian Grey in 50 Shades of Grey, the most talked about film of 2015.