How EY Got Their Graduate Recruitment Programme So Right 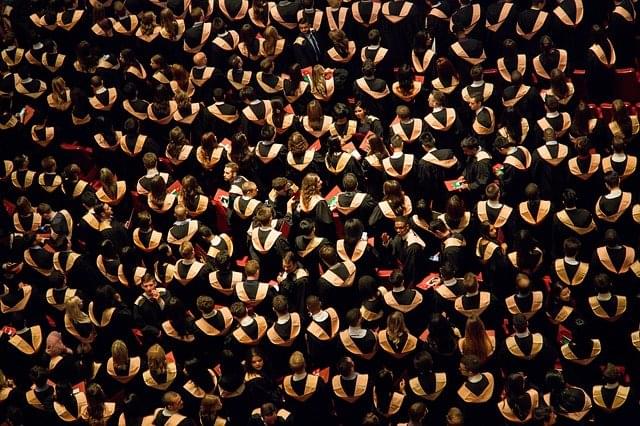 Have you started thinking about your graduate recruitment campaign for 2018 yet? Yes, we know May is still another 5 months away, but the best students are already one step ahead of the game when it comes to deciding what companies they want to apply to when they finish college.

But before you dust off last year’s campaign, STOP! If you want to attract the cream of the crop of graduates for your organisation, you need to think outside the box. That’s exactly what the graduate recruitment team over at EY did when it came to putting together their 2017 campaign.

We spoke to Caroline McAniff, Head of Recruitment at EY, who told us how they managed to change the perception of EY in the eyes of graduates, and increase the volume and quality of their graduate programme applications by 119%! 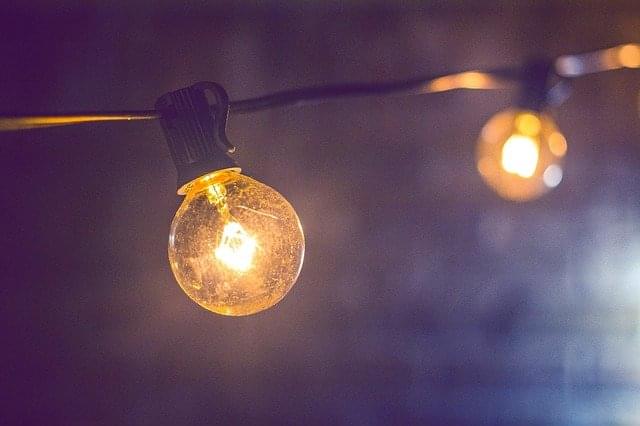 Caroline knew immediately that EY’s next graduate campaign needed to change the perception many graduates already had of EY – an overly corporate institution with an older population and a significant hierarchy that did things how they have always been done. How did she know this? Because she had exactly the same perception when she joined the team last year.

“My image of the organisation before I joined was a very conservative place with an older population resistant to change. Nothing on the outside told me otherwise,” says Caroline, who found things were actually very different in the inside. “The reality is very different! EY have open plan offices and constant talk of workplace of the future. Talk of disruption, innovation and digital are a constant and 50% of my colleagues are under 30 years old. I wanted our website and social channels to tell this story, and let graduates know that this is a fantastic place to start a career”.

But how to tell that story? That was what EY needed to figure out. 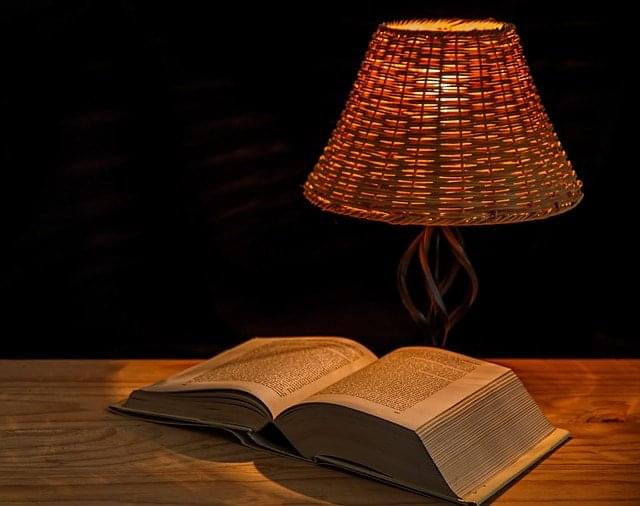 “I think everyone wants the real story not the corporate story,” says Caroline, who conducted a lot of research into what people look for when it comes to finding out about an organisation.

“You want a real honest picture of the company. You want to imagine yourself working there and hearing other peoples experiences helps make that happen,” she continued. “Stories help you relate. If you can imagine yourself being in the shoes of the person telling the story then it helps with the decision making process”. 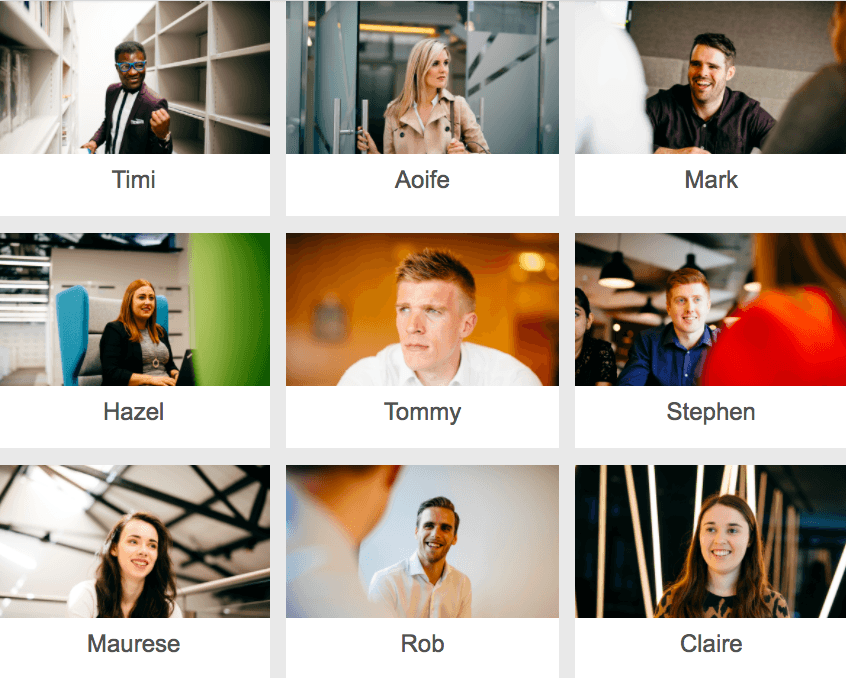 Caroline then set about finding the stories EY should be telling potential grads, which meant asking EY’s current crop of students why they had chosen EY. After engaging directly with them and asking them about their experiences, with the help of a creative agency, 9 key stories emerged which she knew would resonate with other potential graduates:

Each graduate had their own unique reason for wanting to join EY and how it had helped them to grow and fulfil their ambition. Each graduate comes from a different walk of life and has an interest in different things, yet they have all found a common ground in EY.

Due to the popularity of video among Millennials and its excellent storytelling properties, it was decided that it would be the perfect medium on which to tell these stories. “We wanted to allow graduates to see what we are really about,” says Caroline. “It was important to give a real insight into what it’s like to work here.” And what better way to give them that insight then to show them people just like them enjoying what they do in EY on a daily basis.

The human element was another important factor Caroline wanted to come across. “Everyone who joins us talks about how friendly everyone is here. That is our reality,” says Caroline. Video also allowed EY to showcase this.

Each video is no longer than 30 seconds (perfect for sharing on social media), and features one graduate and their own personal EY story. Incorporating the firms global Better Questions campaign, each video opens with a better question to the viewer such as “Do you work to live or live to work?” and “Are you analogue or digital?“, before telling the story of the graduate and why they chose EY. Check out some examples below:

The next step was creating a careers site that resonated with graduates. “I wanted the site to be easy to navigate with an honest, clear message,” says Caroline, and probably most importantly of all, she also wanted the site to speak directly to graduates, in their language. Which is why she decided to remove all of the corporate messaging from the site and hire an English graduate from Trinity College Dublin to rewrite EY’s whole story “in an engaging way that people could relate to”.

Authenticity was a big thing for Caroline who knew that students would easily discern messages written by a marketing team, so made the call to hire a member of their own peer group to narrate their journey through the site. The result is very effective. Each of the 9 stories are narrated clearly and simply, with a touch of humour and fun: 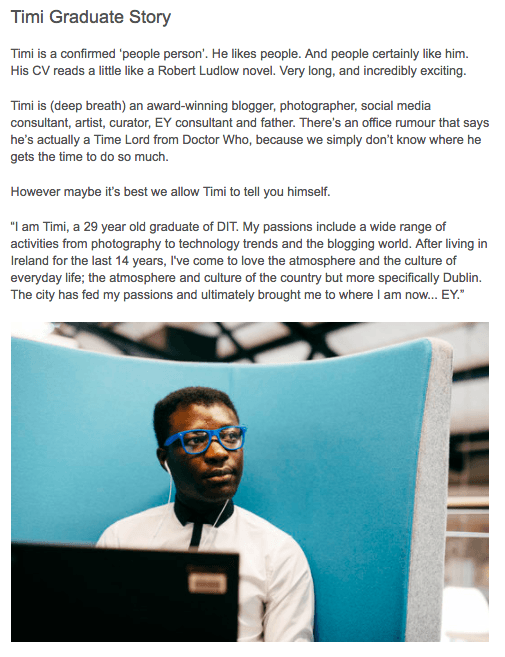 In addition to the 9 video stories and bios telling the story of EY’s lead graduates, the company also set up a graduate blog on which to house short, snappy pieces of user-friendly content that let their people tell potential grads exactly what it’s like to work at EY in their own words. Blog titles included: “Life in the Waterford office“, “How I found myself working in Assurance“, “How I’ve contributed to building a better working world“, “How my role has changed since I started working in EY“, and “Physics to Finance: How I found myself in EY“. 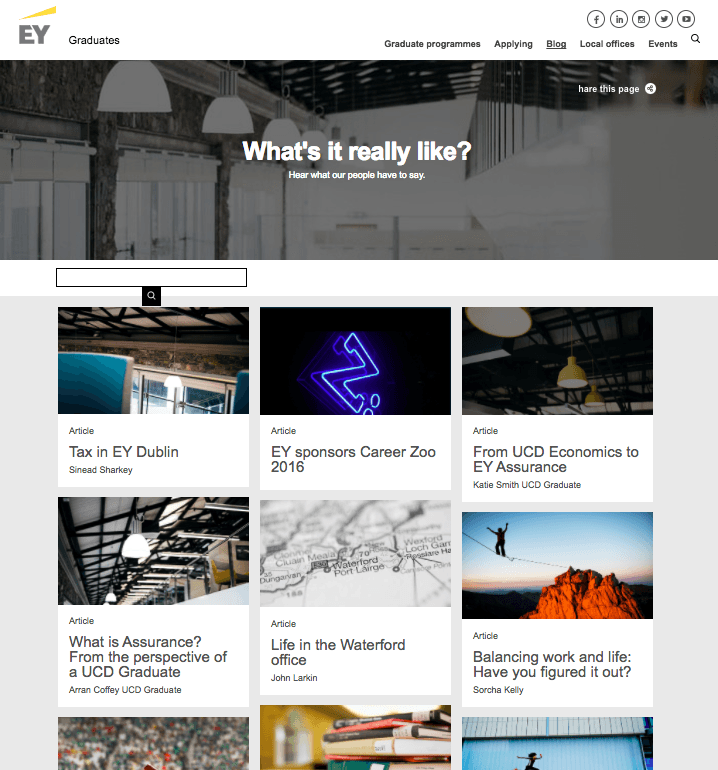 Each blog is highly engaging and speaks directly to the reader. These are real people’s stories told in real words and they go a long way towards helping EY ensure potential grad are engaged enough to want to find out more about the firm and how to apply.

In an effort to get their new campaign and it’s message in front of the audience they needed to target, it was agreed that social media needed to play a large part in the campaign’s promotion – particularly Facebook and Instagram.

“We decided to focus on these channels as they are what we use most internally in EY but, also they were the best vehicle for the videos we created for our campaign,” Caroline explained. “With Facebook we were able to sponsor our videos to ensure they were hitting the audience we were after. It allowed us to really build our story and with that we built our followers. We also used Facebook Live to speak to grads and let our current grads talk about what their experience in EY has been like to date.”

When it came to using Instagram, EY employed a takeover strategy that saw various members of their current graduate programme take over their Instagram account and give a grads-eye view of what working in EY is really like. “We used Instagram stories a lot and allowed our grads to take over our pages from time to time, which allowed our audience a real insight into what we are about”.

After conducting some research, it was found that one of the elements that held EY’s 2016 graduate recruitment programme back, was the length of their application process. The students EY surveyed as part of some market research, said studying for exams and writing essays meant they had little or nowhere near the time to spend on lengthy application forms. So the decision was made to dramatically cut down the process.

“We changed our application form so students no longer had to spend 2-3 hours filling it out,” Caroline explained. “We now just capture the data we need and they attach their CV”. And how they explain the process on their careers site, promotes this fact. Check out the text below to see what we mean: 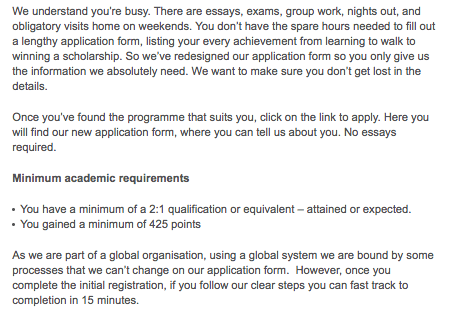 Graduates are then shown how to complete the process with a step-by-step pictorial guide: 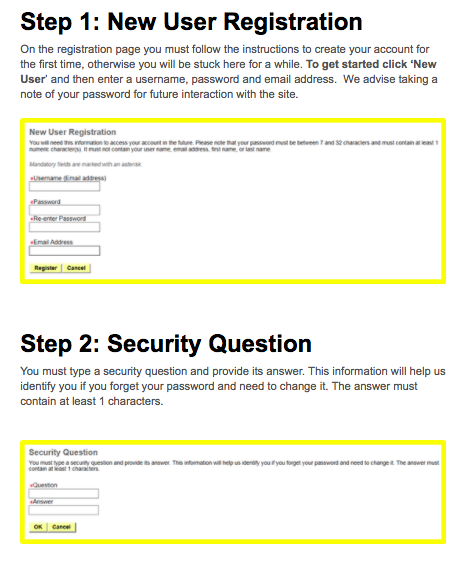 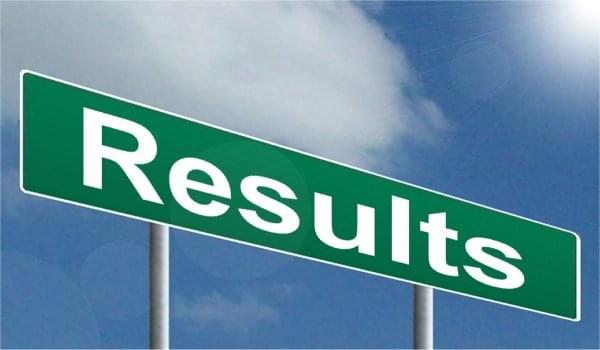 When we asked Caroline what advice she’d give to other graduate recruiters looking to be a bit more innovative with their next campaign, she was very clear on what they need to do to succeed.

“You have to think about your customer and put yourself in their shoes,” says Caroline, who advocates very strongly getting your current batch of graduates involved. “Do lots of research. Get your current grads opinion on what you are doing. Get them involved.” And Caroline firmly believes you should ditch the corporate jargon. “You also have to move away from the corporate commentary,” she says. “No-one connects with that. No-one believes it and its certainly not engaging anyone.” She also can’t stress enough just how important social media is, when it comes to recruiting graduates. “Embrace social in everything you do,” she says. “And most of all have lots of fun with it. Although it was a lot of hard work we had a blast with this project”.