How to: Radically Improve Your Candidate Response Rates in 2 Easy Steps 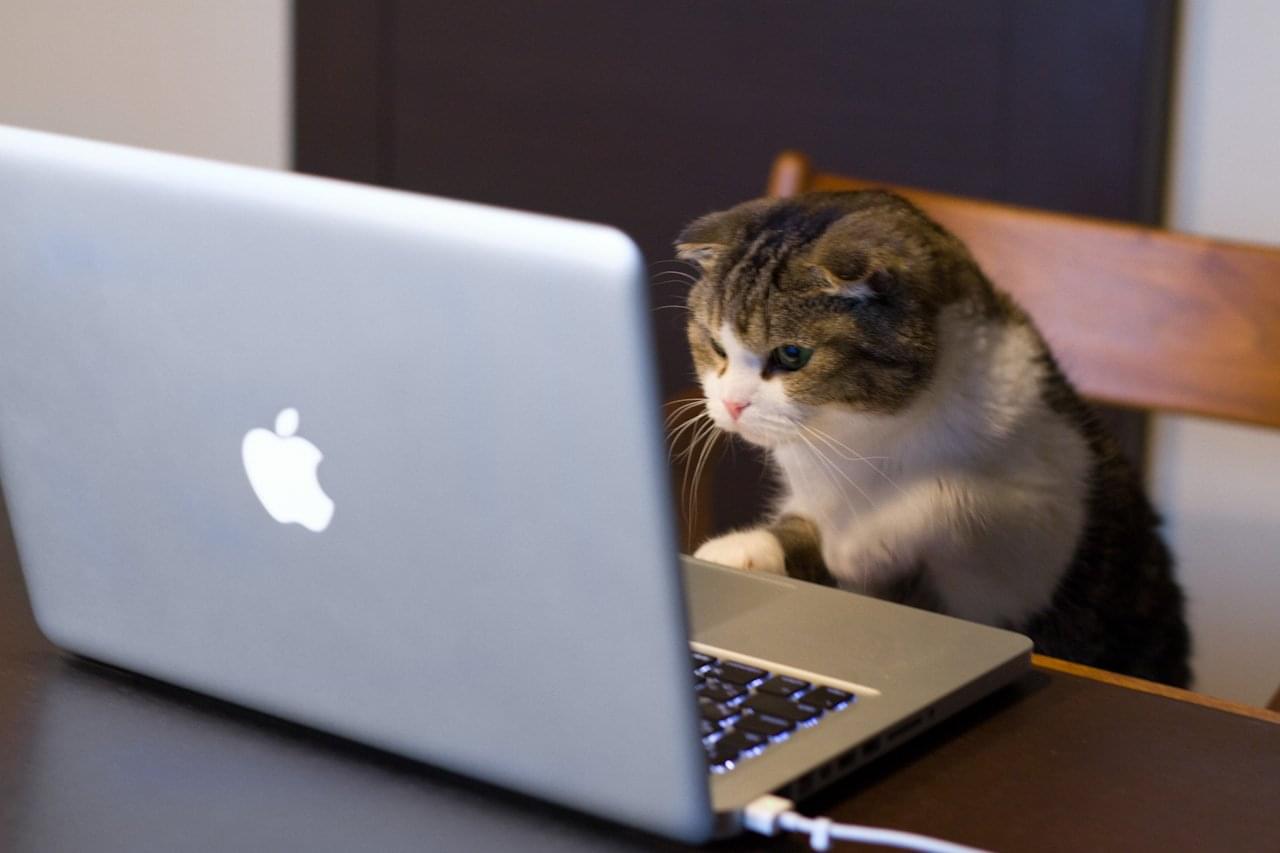 At Social Talent, we’re big believers in learning from the successful practices of other industries, and applying them to our own in order to help improve our own. So when we first saw this research from Yesware, an email productivity service for salespeople, we got very excited! In fact, we thought that the findings of Yesware’s research into email open and reply rates were so significant that they could have quite important implications for the recruitment industry. Implications that could help YOU increase your candidate email response rates. (We’ve even decided to work the findings into our internet recruitment training program, the Black Belt in Internet Recruitment.)

“So what’s all the fuss about these findings?” I hear you cry? Well, drawing on data from over 500,000 (half a million!) sales emails sent by Yesware users in the first quarter of 2014, Yesware found that if an email is ever going to be opened by it’s intended recipient, 91% of the time it’s opened within 24 hours after it’s been sent. Furthermore, 90% of emails that received replies were also replied to within 24 hours after they were opened. That means that during that first day, over half of opened emails were replied to within 3 hours. 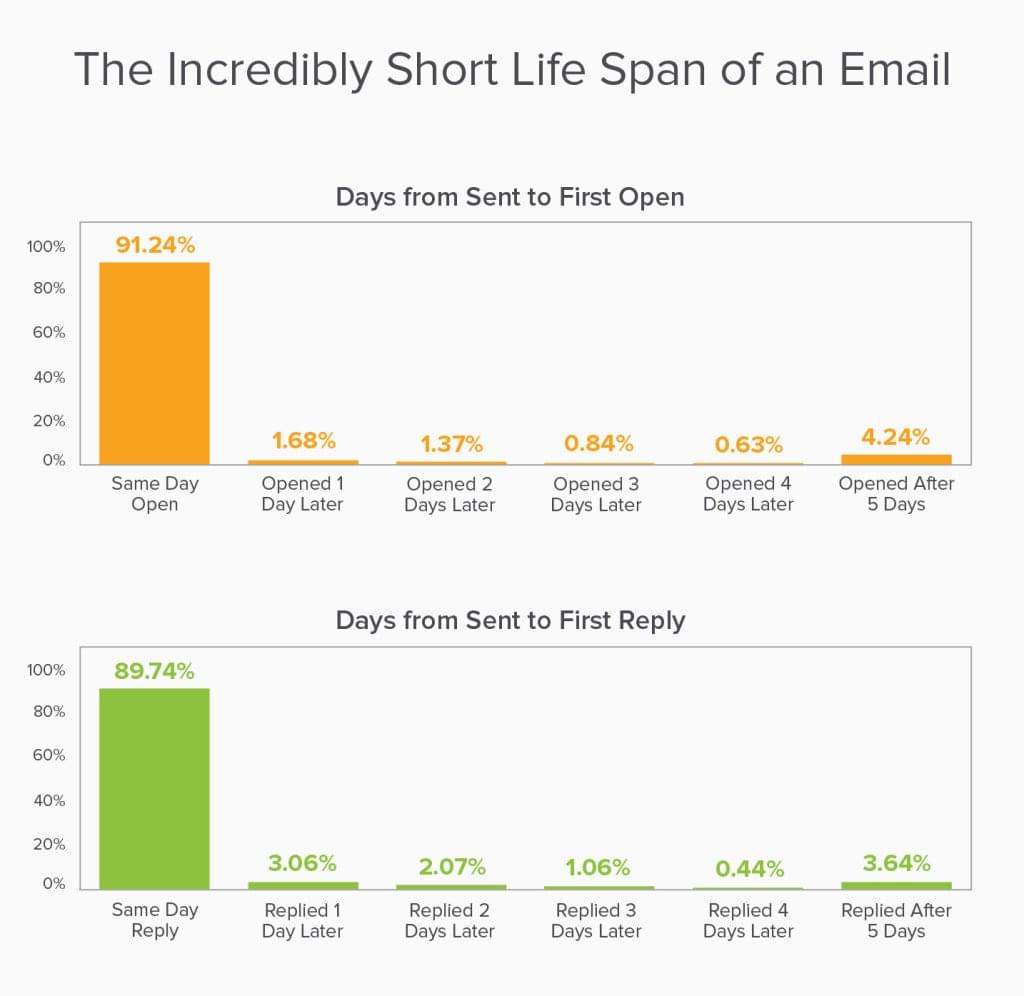 BUT (and it’s a big ‘but’), after Day 1 (i.e. that first 24 hour period) has passed, the chances of your email being opened falls to just 1.7% on Day 2 and decreases thereafter. The same applies for email responses. If you haven’t received a response to your sent email after 24 hours the likelihood of it being replied to falls from whopping 90% to a very measly 3%.

But what does this prove? Well, it proves that the life span of an email is incredibly short and if you do not receive a reply to an email you’ve sent to a candidate within a 24 hour period you will, most likely, NOT receive a reply from that candidate.

So, what’s to be done about it? How can you improve your email open and response rates and ensure that your candidate emails have the best chance of being read and replied to? According to Yesware’s research, there are 2 ways:

If you haven’t received a response from a candidates within a day or two, email them again. Now we know what you’re thinking; “But, I don’t want to seem annoying or pushy” and yes we do understand that it isn’t easy to strike a balance between adding value and being annoying, but Yesware have run the numbers and discovered that if you didn’t receive a reply to your first email, you have a 21% chance of getting a reply to a second follow-up email. And if you still don’t receive a reply to your second email, there’s still a 25% chance that you will eventually hear back from the recipient.

What this chart illustrates is that by continuing to send more emails, you create more opportunities for your recipient to reply. It is a study in scale. Greater volume of emails should correlate to greater total response, and the chart above shows this to be true.

No matter how great your email was, half of the emails you send WILL get blocked by spam filters. Do not let this put you off. Just because someone did not reply to you does not mean that they are not interested. Silence does not mean “no“. No means no, so chase up the replies until you get one. Remember, people are busy and they may just have forgotten about the email you sent them. They could have been in a meeting at the time it arrived or on the phone to their spouse. All you need to do is remind them that you reached out to them.

Quite by accident, we discovered that if we forwarded the original unanswered email to the same person with additional text at the top such as Hi Jane, in reference to my email below from last week, can you come back to me today to let me know if this would be of interest?, most of the time we would receive a reply that suggested that the person either never received our first mail or received both the new mail and original mail at the same time, i.e. it had been caught in spam but the act of forwarding the original message with some new text bounced it out of the spam filter. The rest of the time, people either weren’t interested or they just forgot to reply. Either way, you likely spent a lot of time searching for this person, so rule them in or out before you re-start your search.

Bottom line: It pays to follow-up.

P.S. If you’re worried you’ll forget to follow-up along with everything else you’re trying to get done in the day, don’t be. Boomerang is an excellent application that prompts you to follow up with emails sent out if no response is received, or schedule your emails to send (using the Send Later function). 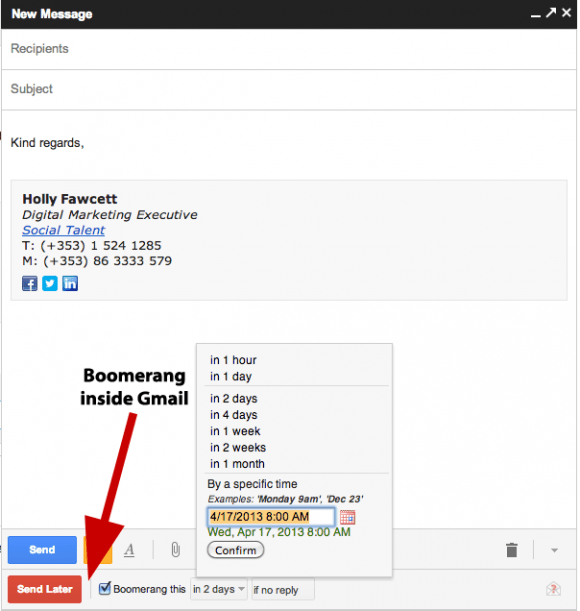 And Boomerang can also alert you as to whether or not your email has been opened and read. It’s a super handy tool for recruiters that makes following up a far less admin-heavy task. Boomerang is available for free on Gmail and can be installed immediately here.

The next best way to give your email the greatest chance of being replied to is by sending it at a time when there is less competition. Yesware use the example of “Graveyard slot” infomercials to explain this logic and we enjoyed it so much we’re going to explain it the same way.

Basically, the same way people who like to stay up late are more likely to watch infomercials when there’s nothing else on TV at 3am, candidates will be more likely to notice, read and respond to your email when there is little else being emailed.

Companies with products like Snuggie and ProActiv have made a traditionally unattractive advertising slot into a very lucrative one as they are targeting a very captive audience. Clever recruiters who choose to send out emails to candidates at a time when no one else is sending emails, could see greater open and reply rates. Take a look at this chart illustrating the difference in open and reply rates for emails sent on weekdays versus those sent on the weekends:

And the same line of thinking applies to emails sent over a 24 hour period: 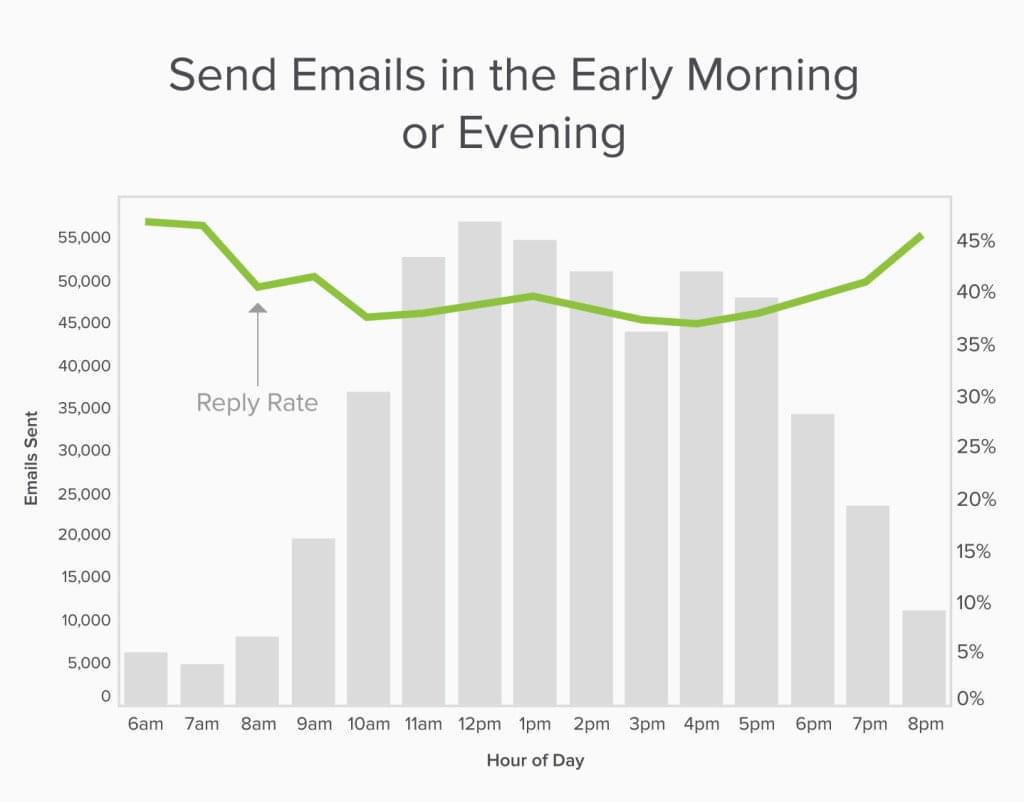 Emails sent earlier in the morning and late at night had a far greater percentage chance of being opened by their intended recipients, simply because less emails are sent at those times. Emails sent between 6 and 7am and those sent around 8pm were the most effective at getting a response, with reply rates hovering around 45%.

Finding good candidates takes a lot of time. You know that! So when you’ve found a great candidate be sure to rule them in or out before you re-start your search. Remember:

Then get ready to watch your candidate response rates soar!