How to: Source Candidates from Blogs 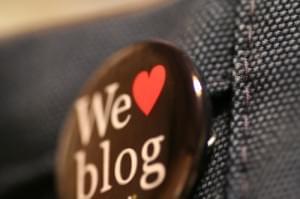 When it comes to candidate sourcing (or headhunting as we used to call it in the old days!), most recruiters are very familiar with LinkedIn; many dabble with Twitter and some even give Facebook a go, despite the fact that it is almost impossible to search the 800 million strong network for job titles or skills. There are over 120 million profiles on LinkedIn, 200m on Twitter and 800m on Facebook, but how many recruiters do you know that are tapping into the estimated 173,429,780 public blogs out there?

Blogging is becoming increasingly popular as even non-technical internet users have become comfortable sharing their thoughts and lives on-line. According to BlogPulse, the total number of blogs has increased by 9% in the last 8 months alone, jumping from 156 million to nearly 175 million, representing an annualised increase of 13.5%.

The top 3 blogging platforms in the world are Google’s Blogger (7th most popular website in the world), WordPress (18th most popular site) and Tumblr (47th). Other popular platforms include LiveJournal, Typepad and Posterous. All of these platforms share one thing in common, each encourages users to complete a profile or bio section with a location field. That is all a recruiter needs to search and source professionals on-line.  The other great thing about blogs is that you don’t even have to guess at someone’s email address; the act of commenting on a person’s blog will automatically generate an email to notify the blog author of your comment.

Similar to Twitter, the biographical data can often be limited, you are unlikely to find a comprehensive CV/resume and may not find current employer details but with paragraphs of text to play with rather than just the 140 characters of Twitter, you are more likely to find candidates based on specific job titles rather than just headline profession descriptions (think “J2EE developer” rather than just “Developer”). They are also largely un-mined by other recruiters (at least until now) with sites such as Blogger.com showing an average of 45 lifetime profiles views for some of the Software Developers I looked at this morning.

So what are you waiting for? Well, each blogging platform is different and requires unique boolean search strings to find the profiles. Ideally you will be comfortable with advanced search queries that enable you to find your own patterns and develop the strings from there, but to get you started, here are some good search strings for the top blogging platforms. In each case I’ve gone looking for software developers, primarily looking in Ireland where possible, but feel free to swap out the job titles and locations for something else: 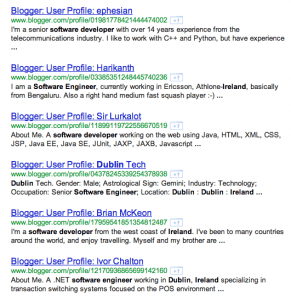 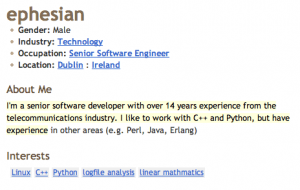 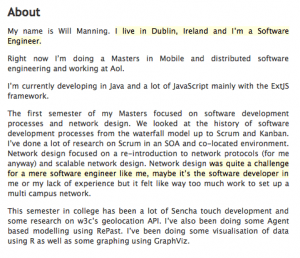 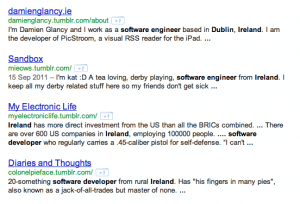 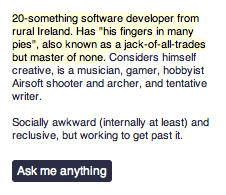 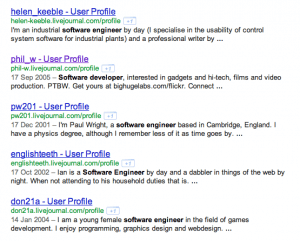 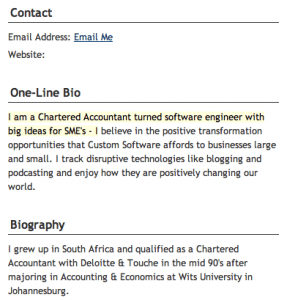 If you want to learn how to use these strings effectively and how to write your own strings for other web-sites including LinkedIn and Twitter then check out our Blue Belt in Internet Recruitment course here. We are running a one day course in Dublin this week and starting an on-line course next week. Find out more information here.