Recruitment Industry Has Best Year EVER! 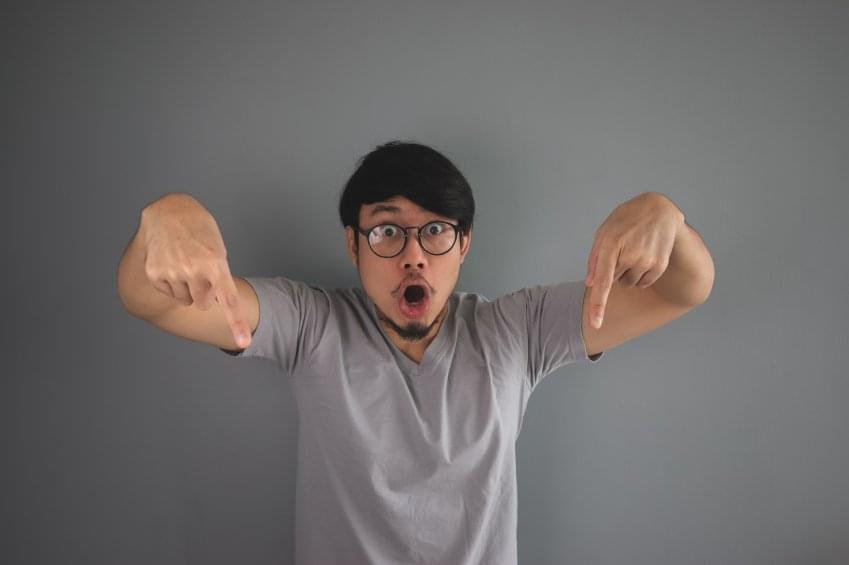 According to Suzie McCafferty, the Managing Director of staffing company Select Appointments, everyone involved with the recruitment industry should be congratulating themselves for helping towards the industry’s best ever year!

That’s because according to the Recruitment and Employment Confederation (REC) recently released 8th annual report on the recruitment industry’s performance, we can see that total recruitment industry turnover increased by 9.7% in 2014/15 to reach £31.5 billion – a result of improved margins in the permanent market and increased volumes of temporary, contract and interim placements.

The REC’s annual report also found that 634,000 people were placed into permanent roles via a recruiter in 2014/15. Meaning that since the recession in 2008/09 recruitment agencies have helped 4 million people find a new permanent job.

Just 1% of agencies working on permanent placements are accepting margins below 10%. And more than a quarter (26%) are securing margins of 20% and over. Up from 8% last year.

REC chief executive Kevin Green says: “This is a very exciting time for recruitment. Overall turnover has increased, employers are making more use of agency workers, contractors and interims and recruiters filling permanent vacancies are commanding better margins in a tightening jobs market. This report provides invaluable benchmarking data for our members for assessing how their businesses are performing compared to overall industry averages and to agencies operating in their sector.”

While Suzie McCafferty says: “Month after month we are seeing an increased demand for permanent and temporary staff, which has resulted in wages being driven up. As recruiters we are in the business of driving the UK jobs market, ensuring people find work and businesses find the talent they need to grow. Let’s enjoy this success, but more importantly let’s build on it, so we can ensure the next year is even more successful.”

9 Stats Key to Providing a Great Candidate Experience in 2016 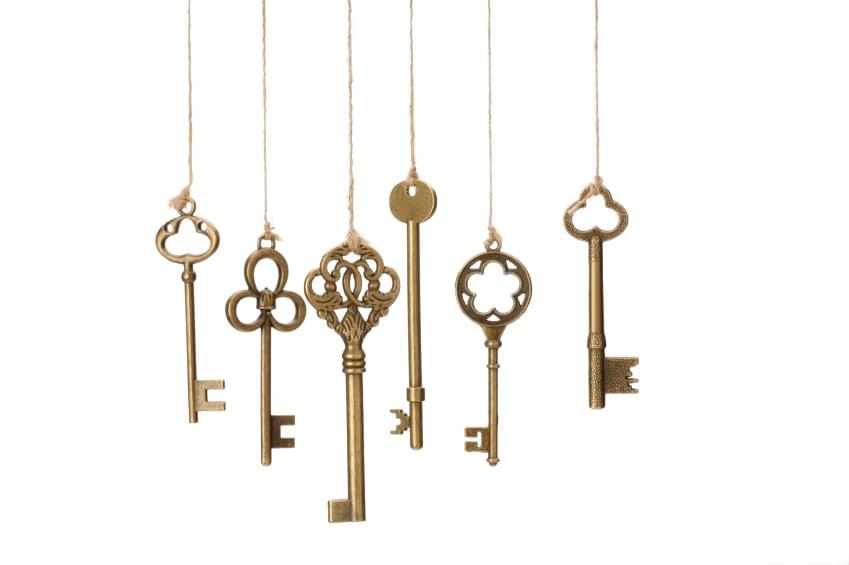 LinkedIn tells us that a whopping 62% of talent acquisition leaders cited employer branding as a top priority at their company in 2015 – a figure that was up from 58% in 2014. They also tell us that one of the best ways to help improve your company’s employer brand, as a recruiter, is to provide a great candidate experience… whether the candidate is offered the job or not.

But how can you ensure a great candidate experience going forward in 2016? What should you focus on? Which areas deserve the most attention? LinkedIn conducted some really insightful research to help you determine just that! Here’s what they found:

5. 77% of professionals want to hear good news by phone
If you have good news for a candidate pick up the phone and call them. This research tell us they’ll really appreciate it.

6. 65% of professionals want to hear bad news by email
Conversely, if you have bad news for a candidate, tell them by email – unless that candidate has already invested a lot of time interviewing with you – then it’s more appropriate to have a phone conversation and offer some feedback.

7. 59% of professionals want to hear from you whenever you have an update
In an open-ended question, LinkedIn asked more than 20,000 professionals what bothered them most about the way companies hired. The most common answer was that they felt recruiters didn’t keep them updated enough while they were being considered for a position.

Candidates want to hear from their recruiter whenever they have an update, not just when they are offered a job or are rejected. A good rule of thumb is to contact your candidates at least once a week to keep them warm throughout the process.

8. 94% of professionals want interview feedback if they are rejected
If someone interviews with you and doesn’t get the job, tell them why. The key here is to focus on something constructive, as perhaps they don’t have the skills you were looking for, or they didn’t adequately research your company beforehand.

9. Only 41% of professionals have received interview feedback after a rejection
Going with the last stat, most companies do not provide feedback to a rejected candidate after an interview. But if you provide meaningful, constructive criticism, candidates will appreciate it.

In fact, in the same survey, LinkedIn found candidates were 4 times more likely to consider a job with a company in the future if they were given constructive feedback after being rejected from them the first time.

Twitter Hires New VP Of Diversity And Inclusion From Apple

Siminoff, who starts this month, is joining Twitter from Apple, where he’s been the director of worldwide inclusion and diversity since September 2013. Before that, he led global diversity and inclusion efforts at Morgan Stanley for 3 years. He’s also one of the founding leaders of Out Leadership, a global LGBT leadership organisation.

Van Huysse, Twitter’s departing VP of diversity and inclusion who spent 6 years at Twitter, didn’t say what she’s doing next, but wrote on Twitter that it’s time for her “next chapter”. 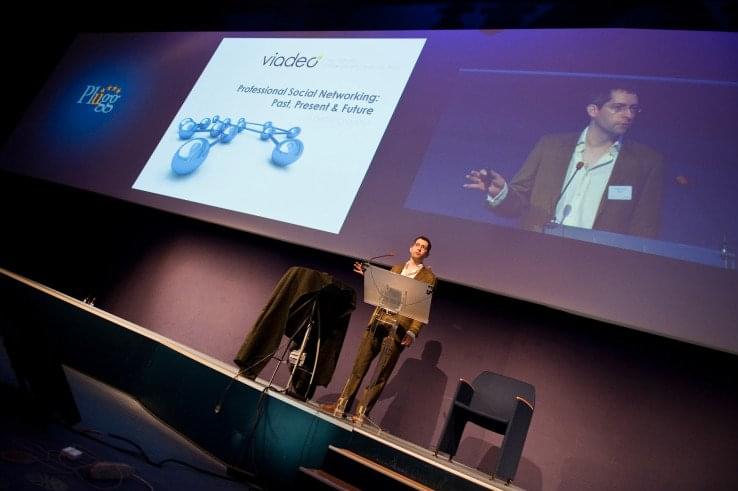 Viadeo, the French rival to LinkedIn, is exiting China in order to focus on becoming “a profitable business”. And, in a further cost-cutting move, it will also shutter its data center in California and migrate to the cloud.

The company moved into China 8 years ago, when it acquired local professional social network Tianji.com – a site they shut down on December 31. Viadeo claims that Tianji has 25 million users, but it has struggled to attract the “very considerable development resources” necessary to drive it forward in “China’s fiercely competitive market”. Viadeo had planned to use one-third of the proceeds from its 2014 IPO to develop Tianji.com, but the listing didn’t raise enough capital and the firm wasn’t able to pull in money from private investors.

“In the first half of 2015 the company went looking for an investor, buyer or local partner, who could guarantee stability and commitment to support it in this market,” Viadeo said in a statement. “However, China’s changing economic conditions marked by a historical slowdown in growth, a major financial crisis in the summer of 2015 and repeated devaluations of the nation’s currency dashed hopes of identifying such a partner.”

Post-China, Viadeo said it will refocus on its home market of France and other French-speaking countries, while putting great emphasis on its B2B sales model.

Do you think they made the right decision? Give us your thoughts in the comments below.

Glassdoor recently undertook a study examining a large sample of interview reviews as well as company reviews. It did this in 6 countries (US, UK, Canada, Australia, France, and Germany) and it found some pretty interesting stats. Key findings included:

What does this mean? Well, interestingly the study noted that there is a strong correlation between difficult interviews and happy and engaged employees. In other words, hard interviews = happy workers.

This graph shows, in all 6 countries surveyed, that a 10% more difficult interview rating at companies is associated with a 3.5% higher overall employee satisfaction: 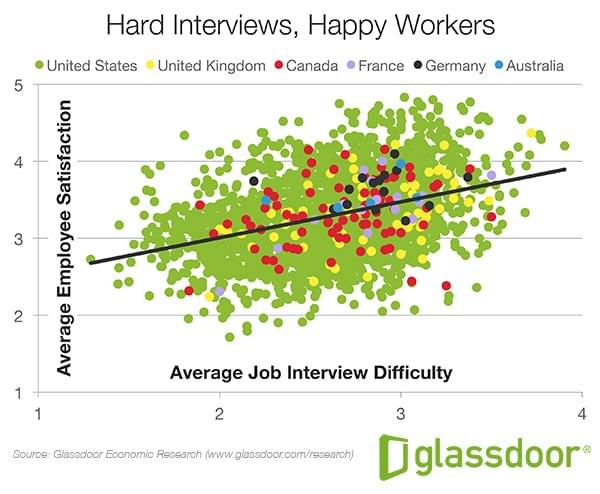 The same study cites several techniques that make an interview more difficult including: brain teasers, puzzles, business problems, and behavioural interview questions. Crucially however, one of the key findings of the study was that there is an optimal level of difficulty of the interview. On a five-point scale with 5 being the most difficult, the average rating of about 4 was considered optimal. However, the humped back curve was always evident in the results of each country examined indicating the optimal level of difficulty: 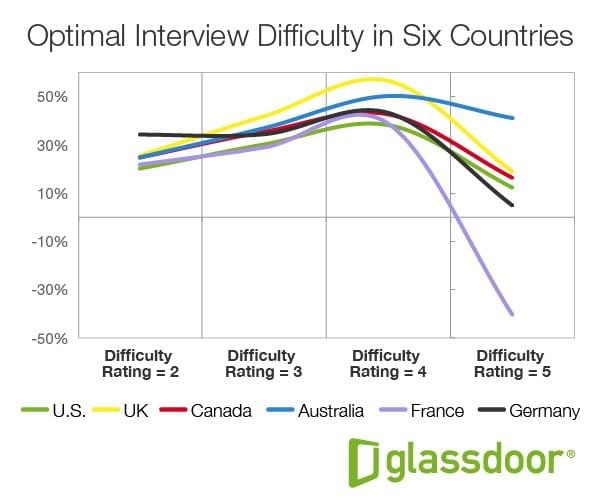 In another study listing Glassdoor’s Top 25 Most Difficult Companies To Interview, the top 5 on the list report an Interview Difficulty Rating of 3.7 to 3.9 out of 5. In each case candidates interviewing with these companies reported challenging and enjoyable experiences.

What does all this mean to you recruiter? Well, the findings would seem to suggest that you should be doing your bets to make the interviews you conduct more challenging (and therefore more enjoyable) for the candidate sitting opposite you. So, in an effort to help you ramp up the difficulty factor and make your interviews more challenging, ERE.net author, John Boring, has devised a list of free behavioural interviews questions to get you started. They are as follows:

Read the study in full here.

The Best Recruitment Video of 2016 So Far 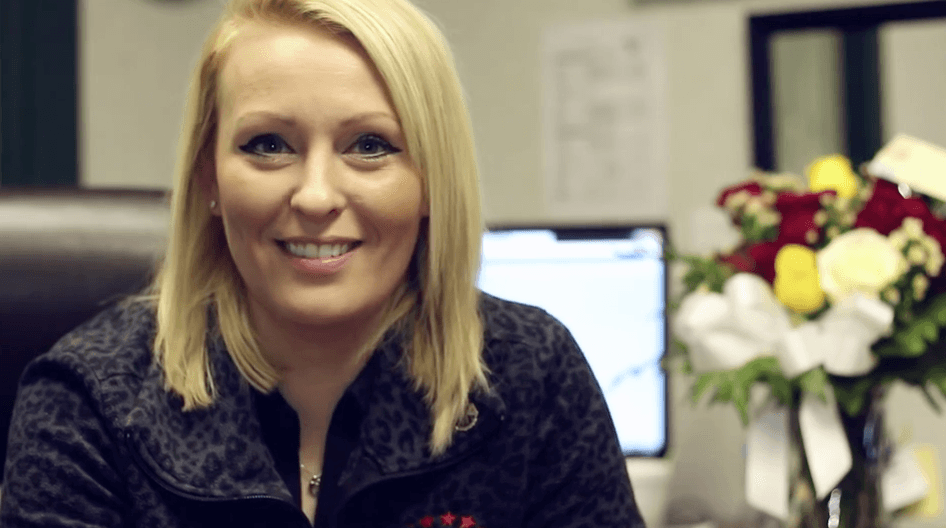 It’s not pretty. It’s not beautifully shot. It’s obvious the budget behind it was minimal. But it’s one of the best damn recruiting videos you’ll see this year. It’s the new two-minute recruitment video for an American metal-roofing company and it does something many other recruitment videos fail to do: give appealing reasons to work at their company.