A few weeks ago, Facebook announced a new function for Brand pages on its site that enabled fans to Tag the brand page in their personal photos. So, for example a fan of a well known cola brand, drinking a can of said cola, could tag both themselves and the cola brand in their photo. This photo would then appear on the Brand page in their Photos section, and promote the brand amongst their target market.

In the two weeks since its roll-out, this function has received mixed reviews from ordinary Facebook users and the Brands themselves. Companies who use Facebook were quite upset when Facebook narrowed its EdgeRank (the algorithm that determines what posts appear in one’s News Feed) making corporate posts invisible to most of their long-term fans. This Tagging function was supposed to make up for it, as a way of instilling interaction and engagement amongst their fans. However, many brands of non-consumer goods products or services are finding this piece of branding pretty useless.

For ordinary Facebook users, some hardcore fans of particular brands are tagging the brands all over their photos and engaging with the brand in a way that they never did before. On the other hand, many find this function “a bit creepy”, and this form of real-life product placement is beyond their tolerance of marketing messages. 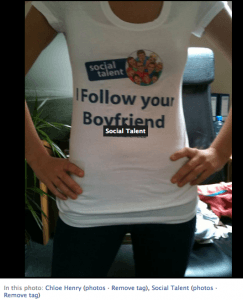 So, we’re going to try an experiment: Today, we’re hosting a track at #TruDublin recruiter unconference at 1.30pm, and all around the conference you should be able to spot several of our team wearing pristine new Social Talent T’s. Get yourself in a photo of these T’shirt(s), tag both yourself and the Social Talent page on Facebook, and we’ll pick a winner who’ll get an amazing prize*!

*Disclaimer: Prize may or may not be amazing.