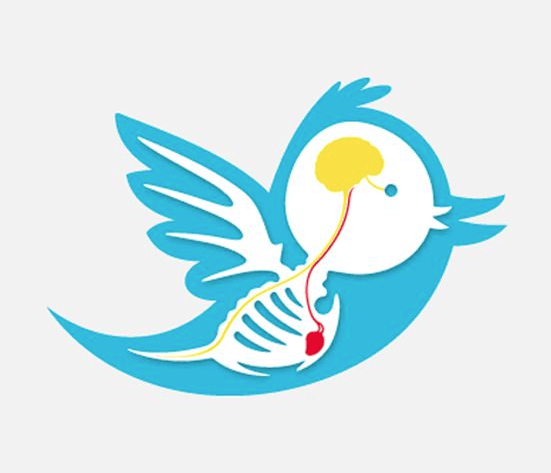 According to the 2014 Global Sourcing Survey, Twitter is now the second most popular social site (after LinkedIn) among sourcers and recruiters looking to attract and identify talent. The research shows that 55% of recruiters are now using Twitter to find candidates (96% are using LinkedIn) and of that 55%, 35% are using it to post jobs. In fact, posting jobs is the primary function recruiters are using Twitter for (just 22% use it to search for candidates). Which is why we’re flabbergasted (how often do you get to use that word?!) by the amount of bad job tweets STILL floating around the site.

So we thought we’d do something about it. Below you’ll find the bones of a perfect job tweet. A framework you can use to help you construct engaging, successful job tweets that’ll help you find the candidates you’re looking for. Ready? Ok:

A job tweet needs to get the right candidate(s) excited about the role your advertising in a very short space of time. There may not be a lot of room to manoeuvre within 140 characters, but that doesn’t excuse you from just listing the job title, the salary, the location, and calling it a day. Everyone does that. You want (and need) your job tweet to stand out in a sea of other job tweets. And the easiest way to do this is by using adopting a friendly tone and approachable everyday language.

We find that asking questions works well. For example, once we’ve stated what sort of candidate we’re after in our job tweets we’ll ask questions like “Do you have what it takes?“, “Could that be you?” “Fancy joining our team of fun-loving Ninjas?” It’s exciting but succinct and most importantly it prompts an answer from interested candidates.

When it comes to writing job tweets, hashtags are your best friends. Not only do they make your job tweets searchable within Twitter (e.g. anyone who searches for the hashtag you’ve used can find your tweet), but they also help people understand, at a glance, what your tweets are about. For example, if you’re advertising a sales job use #sales or #salesjobs in your tweet. That way, anyone looking to discover tweets using the #sales will be able to find you tweet. Similarly, anyone who comes across your tweet will know at a glance that it is about a sales role, because you’ve chosen to highlight #sales.

Recruiters can often get a little carried away when it comes to hashtag usage in job tweets however, and try to cram in as many of them as possible! Take this tweet for example:

Just look at the amount of precious characters wasted with unnecessary hashtags! Try and keep your hashtag use to a minimum. 2 or 3 is okay, but tweets that use more than two hashtags have been proven to receive a 17% drop in engagement. So only highlight the most important words. And once you’ve determined the most appropriate hashtags for your tweet, the best way to use them is to integrate them into the wording of your tweet rather than just adding them all in at the end. It looks better and it saves space where space is very limited. Check out our tweet advertising a role for a Customer Service Executive we just filled, for example: 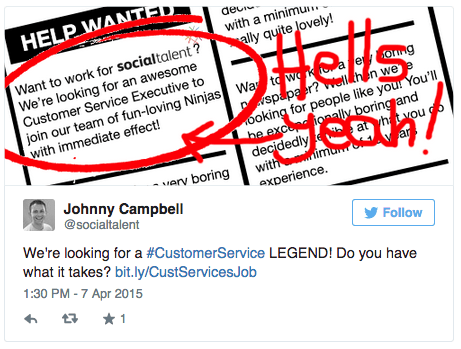 A Call To Action

You’re not posting these job tweets just for the good of your health. You’re posting them to spread the word that you have an open role and to encourage the right people to apply for that open role. And as a result, you’re going to want those people to do something with the information in your tweet and sometimes, you just need to spell it out to people what you need them to do.

Once you’ve told them about the job, tell them what you need them to do. Whether that be to click a link, contact you at a phone number, email you at a specific address or whatever, just be sure to make it clear what you want interested candidates to do with the information you’ve just given them.

At the risk of sounding like your first grade English teacher, I’d suggest employing a few key verbs and adverbs to help you do this. Good, engagement provoking verbs to use in your job tweets include:

And good adverbs to compliment those verbs include:

Got ‘mad skillz’ in the #Sales department? Then our #Dublin team wanna hear from YOU! Click for more juicy details -> http://t.co/WpVwjvcNR7

The power of Twitter as a job posting resource is not just in the ability to reach your own network of followers, it’s also in the ability to reach your followers followers and their followers followers. Twitter offers you the unique opportunity to be discovered by audiences you may not have necessarily reached all on your own, and the easiest way to reach them is to ask for retweets. Yes, I know it’s not like us recruiters to ask for help, but when it comes to posting jobs on Twitter, asking for help via retweets is a great strategy. According to Salesforce, less than 1% of brands do this and by failing to ask their followers for retweets they’re missing out on a huge opportunity. Their research proves that asking your followers to retweet a tweet, results in 12 times more retweets! Just think how many potential candidates that tweet could reach! Note: Be sure to actually spell the word ‘retweet’ when asking your followers, because just using the abbreviation ‘RT’ is 23% less likely to be retweeted.

Salesforce reports that 92% of all Twitter interaction (retweeting, replying etc.) happens when readers click links, and that tweets with links receive 86% more retweets than those without. Therefore having a link for interested candidates to click, is an extremely important element to include in your job tweets! But you shouldn’t just include any old link. Long links are not only a waste of precious characters and visual real estate, but they do nothing to help content get re-shared. It’s time to start using a URL shortener. We use bit.ly, but we would also recommend ow.ly (from Hootsuite) or goo.gl (all free to use). Not only do they allow you to save some of your 140 characters for more important messaging by cleaning up the size of your link, but they also (bit.ly in particular) give you great metrics to accompany your links which lets you know things like the number of people who clicked on your links, when they clicked them, and which social networks each link has been shared to. Using customised short links also makes your links more trustworthy in the eyes of viewers. If the link you’ve chosen to use is a random garbled mess, people aren’t sure where it might lead them, so they’ll refrain from clicking it – your click through rates stay low. But if you use a customised short link that goes some way to explaining what the link is and where it goes, more people will click on it – your click through rates increase. We do this for all of our blog posts, webinars as well as our job tweets for example:

We’re also looking for some #Sales talent in Dublin! So if you’re gifted at selling ice to the Eskimos give us a bell http://t.co/WpVwjvcNR7

It’s a simple change to make, it looks way better than your million-character link, your click through rates will increase (and your engagement rates along with them) and you get fantastic stats to inform your future job tweets. So that’s a win-win-win-win-win!

But as with the links you include in your tweets, don’t be satisfied with any old images. Be clever with the use of your image. You are limited in characters in your tweet, so why not use your image to say more about the job you’re offering, like we’ve done:

Calling our friends in Oz! We’re in the market for a Sales superstar in Sydney. Could it be u? http://t.co/nep7KbOEYX pic.twitter.com/UvtTZc59hs

When is the best time to tweet? It’s a question many recruiters still stress over, but it turns out the magic “spot on the clock” isn’t as illusive as you may think. Numerous research studies into the best posting times have been carried out and it is generally agreed that on weekdays, the best times to tweet (e.g. when click through rates are at their highest) coincide with the typical person’s downtime e.g. the morning commute, lunchtime, the evening commute and after meal times. Even Twitter themselves have said that most people check Twitter during their commute – their own research shows users are 181% more likely to check Twitter during their commute.

But the best way for you to determine when your audience of followers are using Twitter is by using a free tool like Tweriod. All you need to do is sign in with your Twitter account and Tweriod will give you a breakdown of when is good to tweet from your account on a daily basis. For example, on weekdays the best time to tweet from our Social Talent account is between the hours of 3pm and 6pm i.e. commuting time both for users in the UK and Ireland returning home and users in the US and Canada heading to work:

Note too that Twitter engagement tends to be a it’s highest on Saturday and Sunday when people have more down time to check their tweets and react to them. In fact, engagement rates are 17% on the weekend then on weekdays. Tweriod tells us that the best time to tweet from our Social Talent account on the weekend is between the hours of 3pm-5pm and 6pm-7pm:

But most recruiters (yourself included) will be writing job tweets throughout the working day not on their commute or after their dinner! This is were scheduling your job tweets becomes very important. Utilise a free product like Buffer or the scheduling feature on Tweetdeck to have tweets scheduled for the most appropriate times for your account, that way you’ll never miss the perfect posting times and your tweet will post when your followers are there to see it. 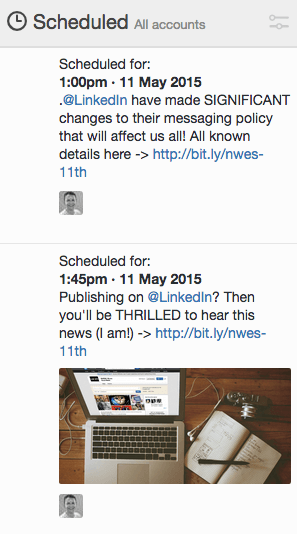