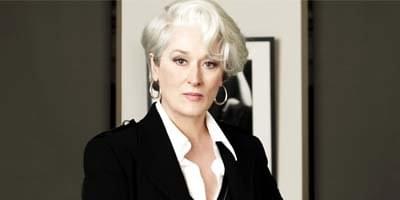 We can all relate to the idea of a boss that makes our blood boil! Whether it’s past or current (we hope it’s the former!), terrible bosses can hassle you, annoy you, be overbearing or all of the above to the point where it is just impossible to work for them. Because this topic is so popular with the masses, TV and the silver screen have jumped on the bandwagon and have brought us some of the most funny and most irritating bosses we have ever come across. Read below as we break down our top 10 worst bosses below (5 from TV and 5 from the movies) in no particular order.

The original The Office and the original office fool. David Brent (played by Ricky Gervais) had a place in audiences’ hearts everywhere during the show. David was general manager of the Slough branch of the Wernham-Hogg paper merchants and to say he was completely clueless would be a massive understatement. Not someone you particularly loathe as much as the other characters on this list but someone you would make an effort to have as little time with them as possible. This is mainly due to his constant need to be ‘liked’ by his colleagues and his obsessive lying, particularly the quotes he steals that he tries to pass as his own. He regularly promotes himself as a jack of all trades (poet, dancer, musician etc.) but is usually exposed for his flaws. David always had a penchant for saying the wrong thing at the wrong time and this is often coupled with self-delusion and extreme naivety as you can see from the video below.

Yes he is an absolute genius but all geniuses have their flaws and there is a long list of these when it comes to Gregory House (Hugh Laurie), typically referred to as House, who is Head of Diagnostic Medicine at Princeton-Plainsboro Teaching Hospital.

A fully certified misanthrope, House is often rude with his patients and treats his employees like pawns. He also has a massive ego that’s difficult to beat. If that’s not enough, he is quite unethical when it comes to his profession (something you really don’t want to associate with a doctor) and also makes his best effort to avoid working at the hospital’s free clinic.

“Excellent”. How could we leave out Mr. Burns? The evil owner of Springfield Nuclear Power Plant and the boss of Homer Simpson. This guy is the most powerful and wealthy man in Springfield and regularly uses his riches to do whatever he wants, without any regard for his employees or citizens. He displays little trust in his employees as he constantly monitors them through closed-circuit cameras (although you could say this is warranted with the likes of Homer, Lenny and Carl) and also places little importance on their safety and well-being at the plant.

One of the recurring themes of the show is his inability to remember Homer Simpson’s name (“Simpson, eh?!) even though they have encountered dozens of times. Mr. Burns’ character is stereotypical of corporate America as he is purely motivated by satisfying his own self-interests, blackmailing officials and nuclear safety inspectors. He is also hilariously stingey which is best demonstrated when he releases hounds on charity workers calling to his mansion.

Wilhelmina Slater (Vanessa Williams) is the perfect example of the stereotypical Creative Director of a fashion magazine. She is absolutely ruthless and power-hungry and will use anyone and anything to satisfy her huge appetite!

She will do anything to get ahead and even has documents with private information on her rivals in case she ever needs to blackmail them. Imagine being forced to serve as a surrogate by your boss who stole ‘deposits’ from her dead fiance? You really couldn’t make this stuff up. Also, she regularly insults Betty for the clothes she wears but that really isn’t surprising is it?

Perhaps not as well known as the other characters on this list but if you have ever followed the show, you will know how much of a sleazy, disgusting, childish, womanising and mischievous boss Russell Dunbar (David Spade) is. Dunbar is made CEO of his father’s real estate and development business despite being massively unqualified, and consistently uses his title to get what he wants.

He hires Timmy to act as his personal assistant and quickly begins to make him his slave. From forcing him to attend a psychiatric session on Russell’s behalf  which leaves him mentally scarred to cataloging all the ‘encounters’ he’s had, it’s safe to say working for this boss would drive anyone insane. To make things worse, poor Timmy discovers that Russell has implanted a tracking chip in his arm so he can always know where he is. Yikes!

Another character from the fashion industry – it is very much a cut throat isn’t it?! Miranda Priestly (Meryl Streep) is editor-in-chief of Runway fashion magazine who has an icy stare that sends shivers down the spine of audiences everywhere. Ruthless, manipulative, extremely demanding and cruel are all reasonably accurate adjectives to describe this woman.

You really have to feel for her subordinates who are regularly tasked with the impossible, from trying to get a flight out for her from Miami in the middle of a hurricane to getting the manuscript of an unpublished Harry Potter book for her twin daughters. This employer is someone we would love to see go out of style!

Imagine having a boss that you absolutely loathe. You can’t stand working for them, let alone being in the same room as them. Now imagine MARRYING this person. Horrible, right? Well this was the case for poor Andrew (Ryan Reynolds) in The Proposal who was forced to get engaged with his insufferable boss Margaret (Sandra Bullock). Margaret is a big shot New York editor at a major book publisher who places more value on work than building relationships. Overbearing and massively insensitive, it’s not only Andrew who looks for any opportunity to not be in the same room as her, but all of her co-workers as well.
After learning she will be deported to Canada because of her expired Visa, she blackmails Andrew into getting engaged with her after threatening him his job so she can stay in the country. She does redeem herself in the end but we know that we wouldn’t want to be reporting to the Margaret Tate from the first hour of this film!

The quintessential moron of a boss from the dot com era that you just love to hate. Although this movie wasn’t a massive hit in terms of the box office, it has become something of a cult classic mainly due to Lumbergh (Gary Cole) who is division VP of the software company Initech. He’s smarmy, he’s arrogant and he has tragic dress sense. He drives a Porsche 911 SC which has the licence plate ‘MY PRSHE’.

What really annoys people is his non-confrontational communication style which can drive anyone up the wall. Phrases like “I’m gonna need you to”, “if you can go ahead” or “that’d be great” are synonymous with this character. What makes him worse is that he has a tendency to micromanage everyone around him and has an unhealthy obsession with TPS reports. This guy has such a cult following that endless memes have been created specifically for this character.

Paula (Jane Lynch) isn’t exactly a central character in this film but boy, does she leave a mark?! Paula is the manager at electronics store SmartTech. Very aggressive and full of inappropriate innuendoes, she makes it her personal mission to solve Andy’s (Steve Carrell) ‘issue’.

You could probably compare her to David Brent more so than anyone else on this list as she is not exactly conniving but she is the main contributor to a creepy work environment due to her openness. Her line ““I’m very discreet…but I’ll haunt your dreams” is a personal favourite of ours!

What a cruel human being Buddy Ackerman was. Played by the amazing Kevin Spacey, Buddy is a major producer based in Hollywood and is a mean-spirited and vulgar boss to put it bluntly.

Definitely on par with Miranda Priestly, his poor assistant Gus comes to realise that he is indeed the boss from hell, verbally abusing him in front of co-workers and getting him to do meaningless tasks outside the job. A tyrant of the highest order. Our favourite quote? “You are nothing! If you were in my toilet, I wouldn’t bother flushing it. My bathmat means more to me than you!”

Those are our top 10 worst bosses from TV and movies. What do you think? Have we left any out? Have your say here!

Companies Around the World That Are Embracing Diversity…