I was doing a little research over the weekend for a presentation on the way home from California (brag, brag: yes it was fabulously sunny and warm!) and was searching to try and find out how much our web preferences have changed over the last decade. I managed to dig out lists of the Top websites from 2007 and also 2001 and sure enough, there are some fairly obvious trends. The most undeniable one is the massive shift towards social media and social networking sites. In 2001 there were absolutely no social media sites in the top 50 web properties, let alone the top 12, which is not surprising since things really only started to change in 2002. Another noticeable trend is the continued dominance of search engines. MSN.com and Yahoo may have been overtaken (massively) by Google but our appetite for search remains! If I was to make any predictions it would be that over half of this year’s Top 12 won’t be there in 5 years time and Google will likely not be Number 1. More and more I’m starting to think that we can’t just look at the top websites in isolation, we must begin to factor the most popular mobile apps into the equation. Btw, the most popular free app ever on the iTunes app store is……Facebook!

(Interestingly, Monster.com was the 19th most popular website in 2001!) 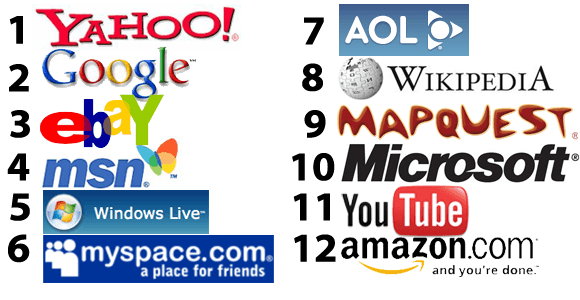 Social had begun to creep in (MySpace & YouTube) but Blogger was still at No.16 and a little known site called Facebook was creeping up at No. 21.

In the recruitment world, job boards were still hugely popular with Monster.com at No. 29 and CareerBuilder at No.36. 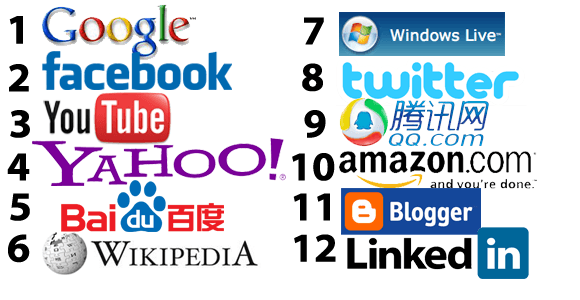 Today, social is the dominant category in the Top 12 making up 5.5 of the sites (I’m counting Google as a half as it also includes Google + which the company is steadily implementing in all parts of the Google experience).