truBoston Review and truLondon Preview: Why you should consider an unconference 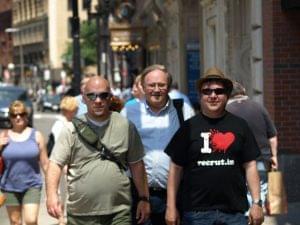 I recently spent a fantastic couple of days in Boston with Bill Boorman, Geoff Webb, Kevin Wheeler and Leanne Chase at the truBoston conference which Bill had organised in conjunction with Bullhorn.  For those of you who have never attended one of the “tru” events; the format is that of an “unconference” i.e. the complete opposite of what you might expect from a conference.  Think 3 rooms containing a fluid group of recruiters having chats with a new topic every hour and the freedom to pop around different rooms without offending anyone.  Think no selling, just talking.  Think no broadcasting, just social.  It was my fifth tru event and several thousand miles from home, I found myself asking why on earth I was at yet another tru event in a different city missing spending quality time with my wife and young son (hangovers can spur such naval gazing sometimes!).
I have been a recruiter for nearly 14 years but 9 months ago I became a “consultant”, i.e. someone who “says” rather than “does” (note my cynicism towards such a descrption) and my “new” job desription involves asking lots of people what works for them, reading extensively, questioning every new product that floods the market and digesting it all down into something a recruiter can practically understand and use.  As a consultant to the recruitment industry I therefore need to be connected to the best and brightest minds and ensure that I can somehow reciprocate my learning from them by sharing my experiences and knowledge from other parts of the world and other industries.  Great recruiters do more or less the same thing, although typically in smaller doses!  They absorb ideas from other recruiters through informal and formal learning and they adapt these tools, techniques and technologies to hire or place talent.
This begs the question, how can we learn more to stay ahead of the curve, to at least compete in this alledged “war for talent”?  Conferences often provide access for the masses to intelligent people, those that can provide insight and guidance to the rest of us.  Unfortunately these conferences tend also to attract sales people who don’t think twice about standing up on a podium and boring you to death procrastinating about why their product/ service/ offering is better than everyone else’s.for an hour!  Conferences can also be daunting for attendees, especially those who attend on their own.  You chit-chat over coffee before it all kicks off, then sit in an uncomfortable plastic chair for 4 hours, break for lunch, often eaten from your lap as you get stuck beside the most boring guy in the room and then head back to plastic-seat hell for another 3 hours.  By the time the “networking event” kicks in at 6pm, you just want to catch the train home and get the hell out of the conference centre!

truBoston was a relatively small event with no more than 50 recruiters in attendance.  Pretty small I hear you say.  Yes, compared even to the other tru events I have attended, it was small.  So far, so bad?  Have I mentioned the venue yet? Art and all the team at Bullhorn could not have been more gracious hosts; they gave us acccess to several board rooms where we held the “tracks” and put on a fabulous buffet of hot and cold food, endless Starbucks coffee and many sugary treats (my personal fave!).  After the first evening they literally trucked in crates of booze and threw a party in the office for the attendees.  Pretty darn impressive and a very cool company too (have you used Bullhorn Reach?  I personally love it).  I had to fly back to Dublin at the end of the first day so I missed the party and the tracks on the second day but in the short few hours I got to spend with the attendees on Day 1 of truBoston I learned loads! For 100 bucks (‚¬65 or only £50) I was able to sit and discuss recruiting strategies, technology, sourcing, candidate attraction techniques and the future of recruitment with some of the most impressive corporate recruiters from organisations as diverse as Google, Constant Contact, Harvard University and Monster.  There may not have been a massive croud of people at the event but they were the right people.  They were the recruiters who really knew their stuff and I don’t just meant about social media or technology, these were recruiters with an average of 15-20 years experience who looked at technology and change from the perspective of someone who is confident that some basic fundamentals never change and that new techniques, technologies and processes facilitate and aid recruitment, they don’t in themselves change the rules. 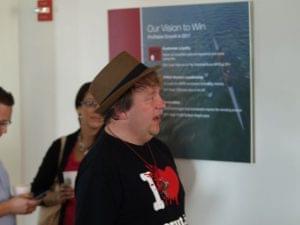 I get paid to “consult” with and train corporate and agency recruiters which involves talking, listening and sharing my knowledge.  The average day at a tru event affords you the opportunity to talk, listen and share knowledge with some amazing people who, quite frankly, most of us could not afford to pay for as a consultant or advisor.  What’s more is that the unconference style allows you to meet with not just the great presenters, but also great minds who might not be as comfortable getting up on a podium or might not be as well known, hence normal conference go-ers will never get to hear their wisdom.  They love these events because they get to learn from so many others, including you.  We are all “experts” on subjects that we have a passion for; just because someone paid Recruiter X to speak does not mean that he or she knows more (or less) than you.  They just have a different perspective, different experience and a different way of communicating their message.

The tru series of unconferences has been described to me by many people as a “traveling carnival” and I don’t disagree.  You regularly see many of the same faces, great people from all parts of the world, people like Oscar Mager, James Mayes, Arie Ball, Geoff Webb, Andy Headworth, Hung Lee, Mervyn Dinnen, Rhiannon Hughes, Max Heywoood and of course, Bill Boorman himself.  Whether you arrive on your own or with colleagues you will always find your old friends and meet new ones.  I arrived in Manchester last year with my business partner knowing no-one and have since them made some really great friends in addition to learning so much from such a talented group of people.  Even those who only get to attend an occasional tru event such as Michael Long (aka @theredrecruiter), Craig Fisher (aka @fishdogs), Jennifer McLure (aka @CincyRecruiter) and Art Papas (@artpapas) have been inspirational and I know that I would have never had the opportunity to connect with if it wasn’t for the tru Carnival.

So, will I be at truLondon on the 1st & 2nd September?  You bet your a*s that I will.  In fact, we’re bringing half the team here at Social Talent to run a “Social Photo Booth” where we’ll be taking professional head-shots agains a green screen for anyone who wants us to send them a set of optimised LinkedIn, Twitter, Facebook and Google+ profile pictures with any one of ten different background; for free!   Got any ideas on fun background we can include? Drop them in the comments box below and we look forward to seeing you all in London on September 1st.