In January 2016, Stack Overflow (one of the biggest online platforms where tech professionals can ask and answer questions of each other regarding all aspects of programming), undertook the most comprehensive developer survey ever conducted. They asked over 56,000 coders in 173 countries to share who they are, where they work, what they build, what they look for in a job and their favourite technologies.

In other words, if you’re looking to hire tech talent, this survey has all the insights you need to develop a great hiring strategy!

1. The vast majority of developers already have jobs. Almost 68% are employed full time, while a grand total of 91% of developers describe themselves as “gainfully employed” (employed full-time, self-employed, or freelance). This means that most tech candidates are passive. 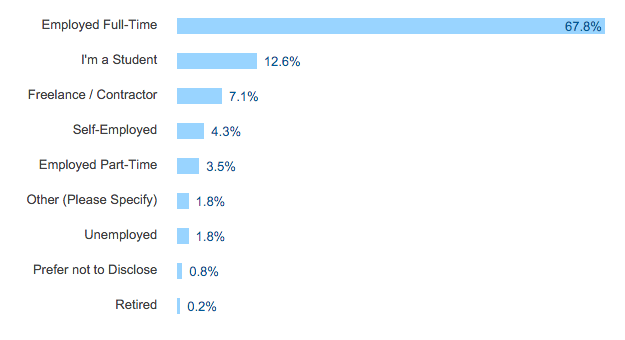 3. In most countries, referrals from friends are the most common way developers find new jobs. India is the exception. But 25% of developers have found jobs through recruiters. 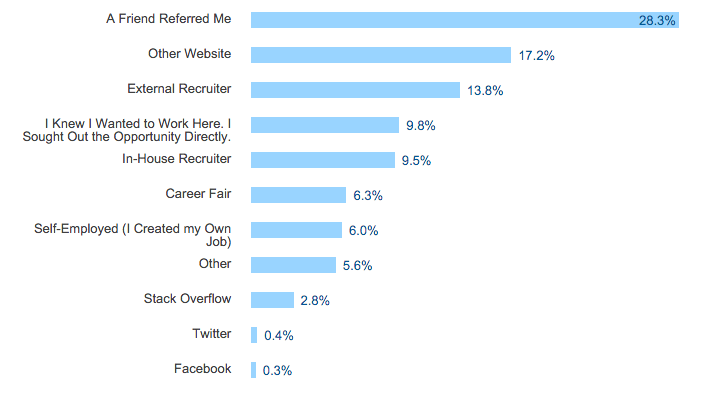 4. Salary is the one thing most developers say they care about when evaluating a new job opportunity. But it isn’t necessarily the thing they care about most. In fact, 37% of developers didn’t even include salary on their list of priorities. Work-life balance, company culture, quality colleagues, flexible working hours and purpose are all very important factors to developers. 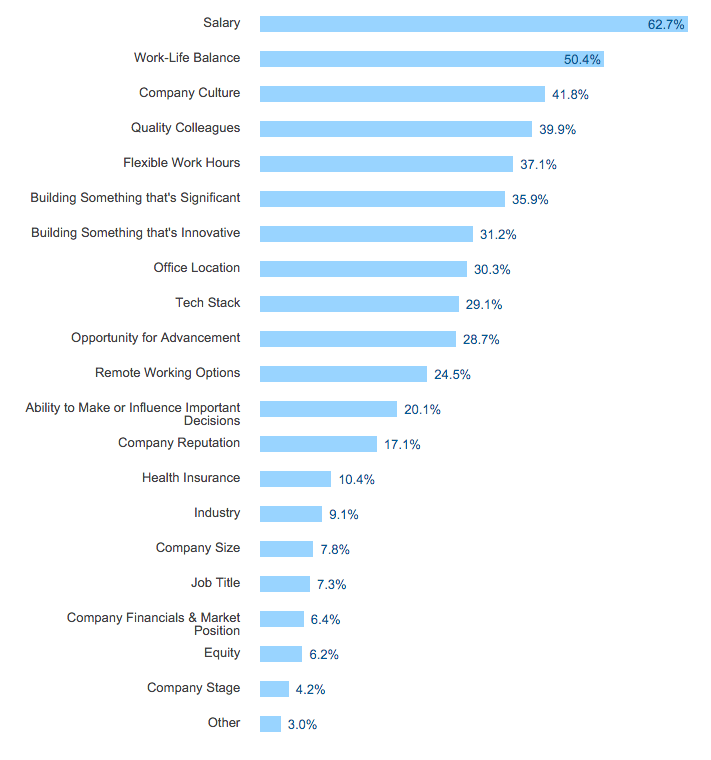 5. The most annoying aspect of a candidate’s job search is the interview process.

In order to improve the process, developers suggested recruiters take the following actions:

6. Once developers are situated in a job, they want to learn new technologies and build new things. It’s also important to them that they have control over product decisions. 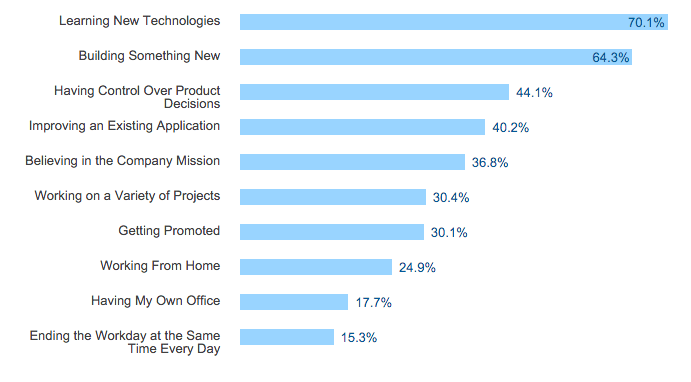 Tech Candidates: In The Job via Stack Overflow Developer Survey 2016

7. Average salary among US developers with 5+ years experience: 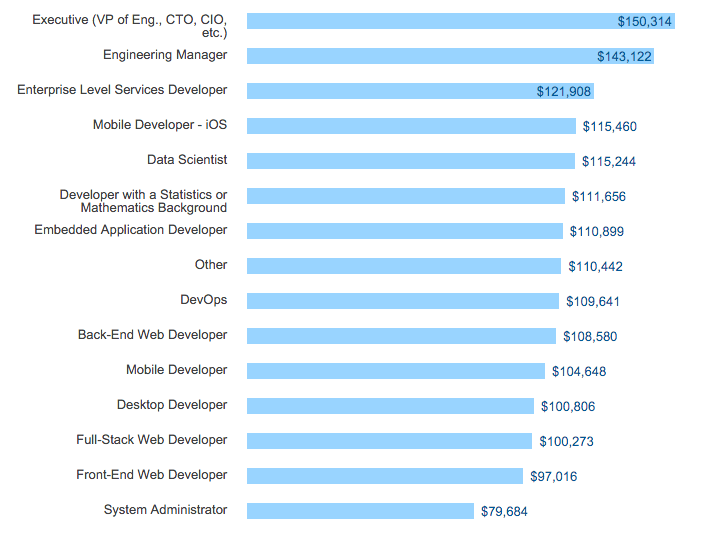 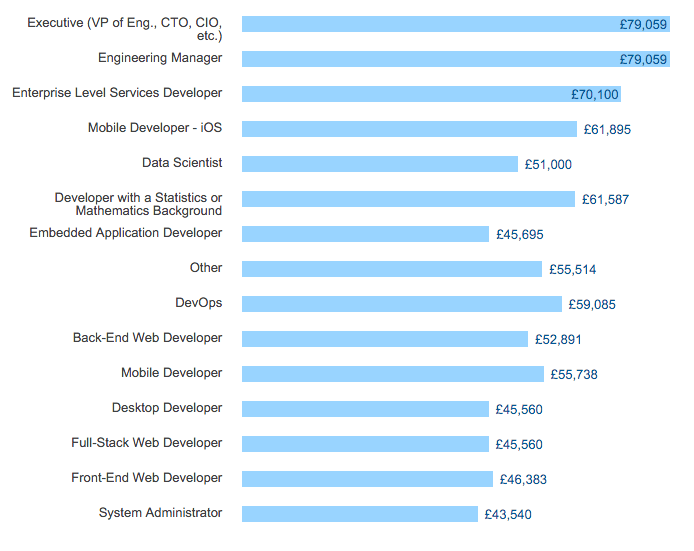 9. More developers work in Software Products than any other industry. 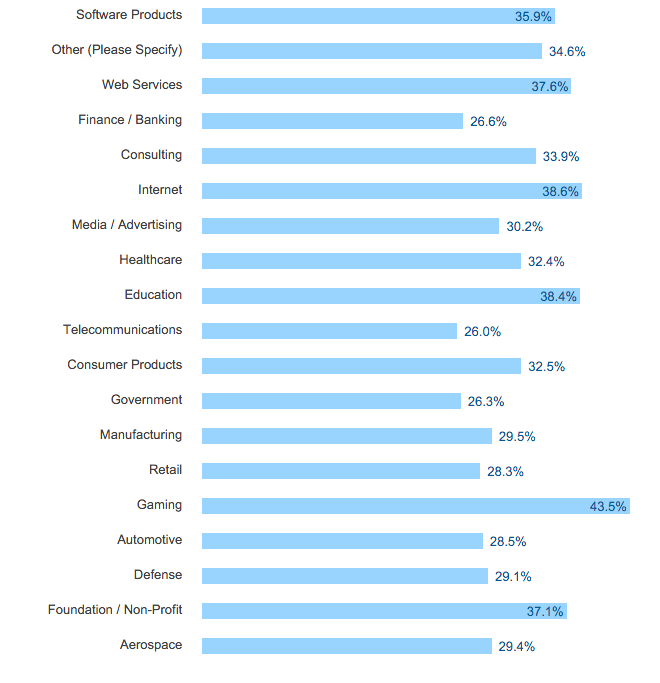 The largest percentage (18%) of females work in the Products Software industry.

10. Developers who work in Gaming are more likely to love their job than anyone else. 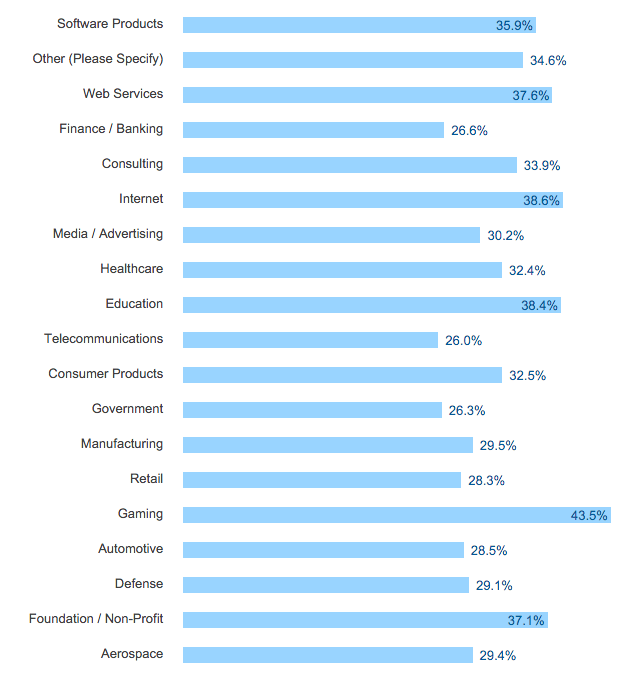 11. 65% of developers who never check in code are satisfied at their jobs vs. 77% satisfaction rate among developers who commit code multiple times per day. A large part of a developer’s job satisfaction relies on their day-to-day job duties. Some despise spending most of their day fixing bugs, while others crave the ability to constantly check in code. Bottom line: developers want to code and they want to put that code into production. If your job opportunity offers the chance to build real things, emphasise that developers can make a difference at your company.

13. Developers in Argentina are far more likely to work remotely than developers in any other country, followed by Mexico, the US and Russia. 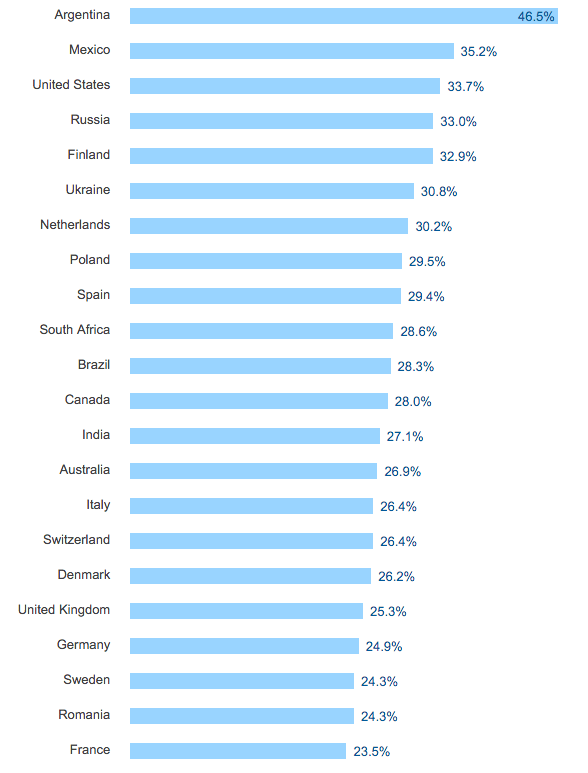 14. Those developers that do work remotely are more likely to love their job than other developers.

15. More respondents consider themselves Full-stack Developers than any other role. On average, Full-stack developers are comfortable coding with 5 to 6 major languages or frameworks (vs. 4 for everyone else). 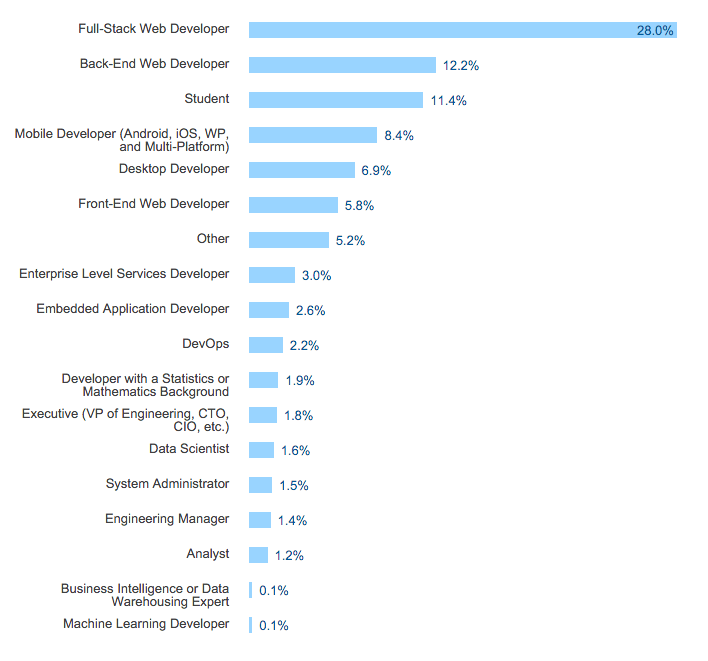 16. JavaScript is the most commonly used programming language on earth. Even Back-End developers are more likely to use it than any other language. 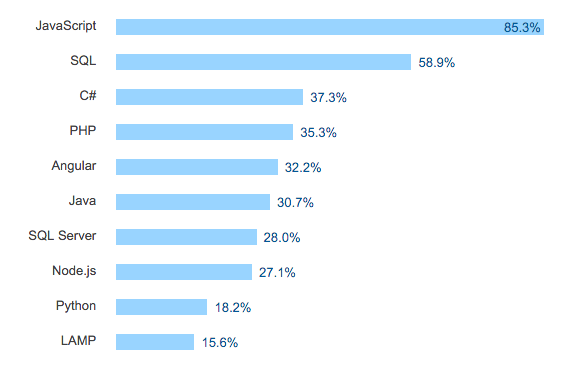 17. The most loved programming language among tech workers is Rust followed by Swift, F# and Scala. 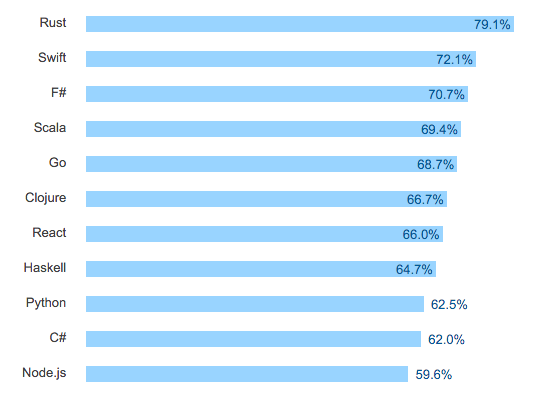 The most dreaded languages are Visual Basic, WordPress, Matlab and Sharepoint. 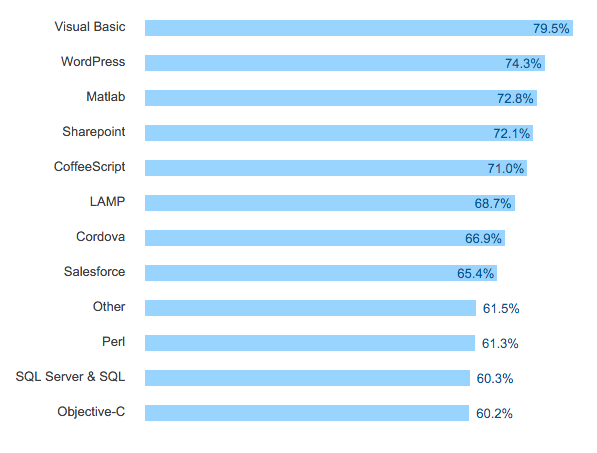 18. Not only is F# one of the most loved languages, but it’s also one of the top paying languages worldwide. 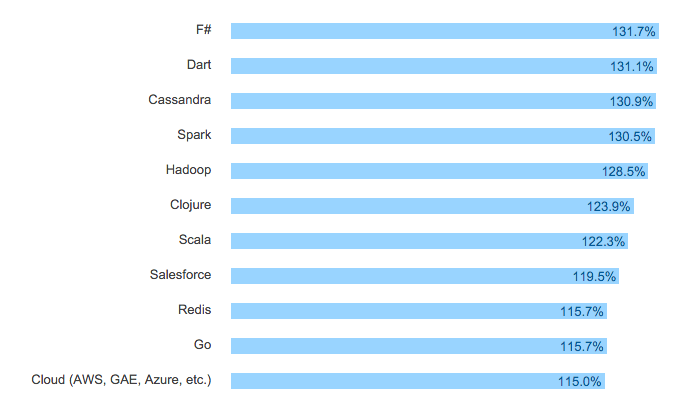 19. Everyone has their own definition of what they consider themselves to be, and it’s important to keep that in mind when searching for them. But when it comes to job titles, 95% of developers identify as either a Developer, Programmer, Engineer, Senior Developer or Full-Stack Developer. 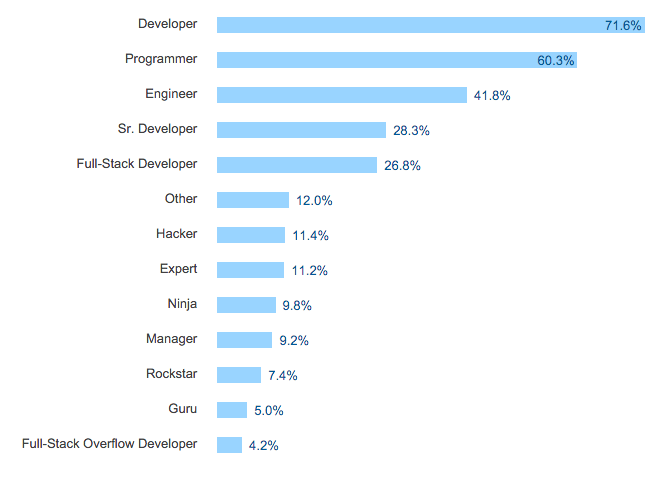 Interestingly, developers under the age of 20 identified the most as a Programmer rather than as a Developer. Another interesting finding revealed that 30% of “Senior Developers” are actually in their 20’s. Seniority in the world of tech is more about expertise within a topic and scope of responsibility, not just pure years of experience.

20. The average developer has about 6.5 years IT or programming experience. This isn’t necessarily professional experience (the average student tells us they have 3.4 years experience). Developers gain experience by building things, even if they’re doing it unpaid or part-time.

21. There is a dramatic disparity between men and women when it comes to tech. 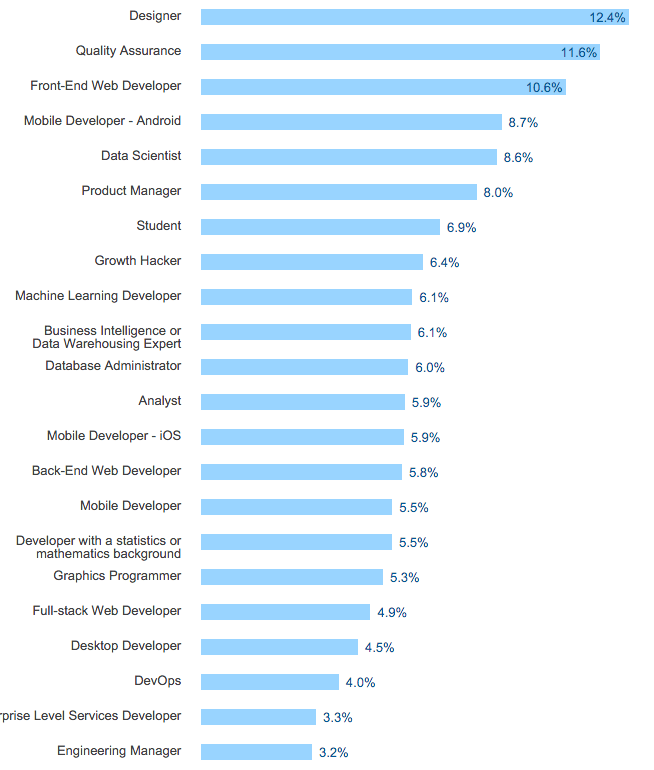 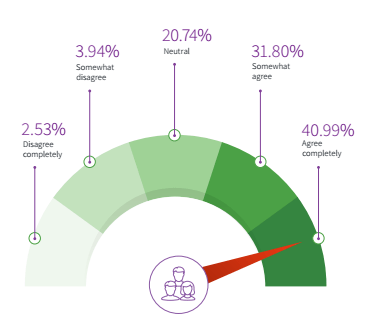