Monster.com gets into bed with Facebook but where's the action?

Monster Worldwide, the parent company of Monster.com, one of the world’s largest job boards today announced a much deeper integration of BeKnown, their social platform that sits on Facebook. From today, job seekers can begin to leverage the power of the Facebook social graph whilst using Monster.com (or any of its 34 regional variants in 19 languages) through the first stage of what is planned to be a much deeper integration of the BeKnown Facebook App on the site.

So, what’s in it for job seekers? Monster shared a preview of the integration with us a few days ago and from what we can see there are really 3 main benefits that job seekers will see from today:

1) You can log-in to Monster or create a Monster profile by authenticating with your Facebook account. Previously you could only sign-up or sign-in with your email address.

2) If you either create a new Monster account using your Facebook authentication or if you authenticate an existing account at any time with your Facebook account you will also have a BeKnown profile on Facebook. Eventually users will only have one profile which will exist on Monster and BeKnown but more on that later.

3) When you view available jobs, the new integration will show you whom you know in the hiring organisation that is advertising that role by tapping into your 1st degree Facebook conections and your 1st and 2nd degree BeKnown connections. 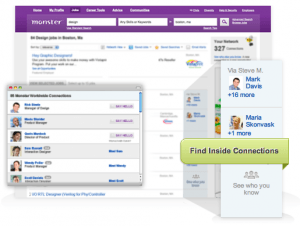 For job-seekers, the first two items are nice but no big deal. The third feature, however, may prove to be a very useful feature as Monster tell us that people like being able to see who they know in a company as it makes the job seeking experience less fearful and more manageable. Marketing talk, yes, but it also makes common sense so we agree that this is a pretty cool jobseeker feature. For smaller job boards, you might scoff and say this isn’t such a big deal but for a jobsite that sees 60,000 jobs added per week in the UK alone, the processing power required to deliver such personalised info from the social graph to the 100 million unique users a month that visit the company’s web properties is enormous hence this is a pretty major engineering feat!

Technology aside though, it’s not a major deal by itself. Today’s announcement doesn’t really offer employers (i.e. the paying customers of Monster) anything new even though Monster are reminding us of the BeKnown integration for Employer Facebook Pages which allows you to add a Jobs tab that will display any of your current vacancies on your Facebook Timeline Page. This pulls jobs not only from Monster but allows you to add an rss feed from any site or ATS platform to populate your own jobs, free, gratis. It’s rare to find such a Facebook App available for free, you should use it if you don’t have this feature on your business page yet.

Integrating Facebook and a CV Database should open up a world of possibilities. Rather than just searching someone’s static CV data, I should be able to take advantage of the behavioural information that the Facebook Social Graph affords me. For example, I shouldn’t need to rely on what they tell me are their interests on their resumÃƒ© as their Facebook likes are going to be a much better indicator. Similarly, if that job seeker is viewing lots of jobs in a different country or state to their home location, the database should intelligently suggest them as candidates to anyone seeking talent in those locations. If the Monster CV is 12 months ago but they have become active on BeKnown, they should be flagged to me as a potentially hot job seeker. The possibilities are almost endless. Unfortunately for now, if someone merges their BeKnown and Monster profile, I can still only see their BeKnown data on Facebook and their Monster data on Monster.com. I understand that Monster have plans to phase in these features over the coming few months but I personally think it was a bad idea not to launch them all now. If you’re going to fail, fail fast and innovate. Launch a whole bunch of cool features, call it a beta, and make changes quickly to turn Monster into a “must use” platform for recruiters. BeKnown allows employers the ability to set up a Company Profile 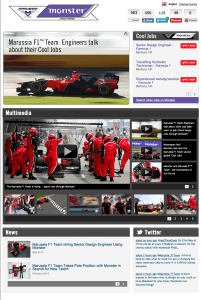 that can be incorporated into their Facebook Timeline Page but it’s pretty ugly; all text and no color. Why didn’t they launch a multimedia rich BeKnown app that allows an employer to manage all their employer branding content; blogs, videos, jobs, photos etc in one place through a simple CMS similar to Jobs2Web or GlassDoor. I know for a fact that Monster have the capability to do this, just check out the page they built for Marussia Formula 1 team here.  Just skin it for Facebook and launch it for everyone. You can guarantee that employers who currently pay good money to 3rd party vendors for similar products would jump all over this. I’m sure it will come, but will it be too late by then? You need to woo employers now whilst the whole employer branding piece is still in its relative infancy (perhaps that time was 3 years ago some would argue!).

Monster have pointed out that BeKnown reached 1m users faster than Facebook, LinkedIn or BranchOut but Facebook tells us that BeKnown only has 190,000 active users vs BranchOut’s 11.5 million users. The battle is not yet lost but the road is long. This latest Facebook integration will almost certainly drive BeKnown’s numbers closer to that of BranchOut and the network certainly has a lot more long term opportunity than the Facebook-only Branchout but several questions remain unanswered about what the long term gain for employers and job-seekers will be. We’re going to remain optimistic that Monster 2.0 will emerge as a genuine threat to LinkedIn’s continuing dominance in this space. Fundamentally LinkedIn is a static CV database of white collar workers with targeted display ads. Monster has the potential to be much more than this. It’s database is pretty close in size, especially if you strip away the shallow and dead data that LinkedIn is littered with (Monster removes resumÃƒ©s that are more than 18 months old) and with a full Facebook integration (which this announcement is not) it could be the world’s first CV database that truly taps into the social graph. Monster’s grades are average but we’re noting on its report card that it has great potential if it just keeps its head down, works hard and is not afraid to take some risks.

Is this the beginning of a potentially brilliant new direction for Monster or too little too late? Tell us what you think in the comments below.