How to: generate a list of competitors from which to headhunt talent in 5 seconds

As a recruiter I have always believed in taking the shortest route possible to achieve my goal; provided of course that it still results in the best candidate possible being hired or placed. If you are an agency recruiter you are under pressure to fill as many vacancies as possible in a month/ quarter; if you are in-house then you are under pressure to fill ALL of the vacancies as soon as possible! Yes, the perfect candidate could be lurking under some remote rock in the middle of nowhere but smart recruiters look in the obvious places first and the most obvious place is usually your (or your client’s) biggest competitor. 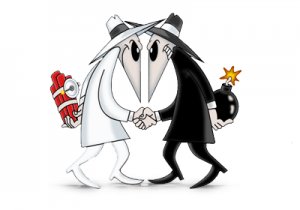 Most businesses can identify a company from whom they would ideally like to source most of their talent, or even just one person for a particular role. It may be because the competitor organisation has a similar culture, similar systems, is of a similar size or they just poached all of your guys and you want some of theirs back in revenge (the latter example may be a bit of an exaggeration)! It’s usually easy to identify your biggest competitor but what about all of the other possible competitors? If you have worked for the same company or within the same industry/ niche sector for a long time then you won’t need to read any further, you know every competitor there is to know and fair play to you. Go off and spend your commission cheque or fat bonus and leave the rest of us alone to learn!

Some of you may have noticed a link that used to appear alongside nearly all Google search results called “Similar”. Unfortunately it has been removed since Google revamped its user interface in preparation for the launch of Google+ just under two months ago. Fear not, you can still access the function of the Similar button through a seldom used Google search command called the “related:” tag. What this seems to do is to examines Google’s index for similarly categorised web-sites so if you search for Similar sites to your company or your client’s company it will display a list of web-sites that Google thinks are “similar” or “related”.

Give it a try; type this into Google, replacing “company.com” with your own domain:

The first part must be in lower case and there can be no spaces. It doesn’t matter too much whether you include the “www.” piece or not.

I tried it below to search for competitors of the largest law firm in Ireland, Matheson Ormsby Prentice, who’s website address is www.mop.ie 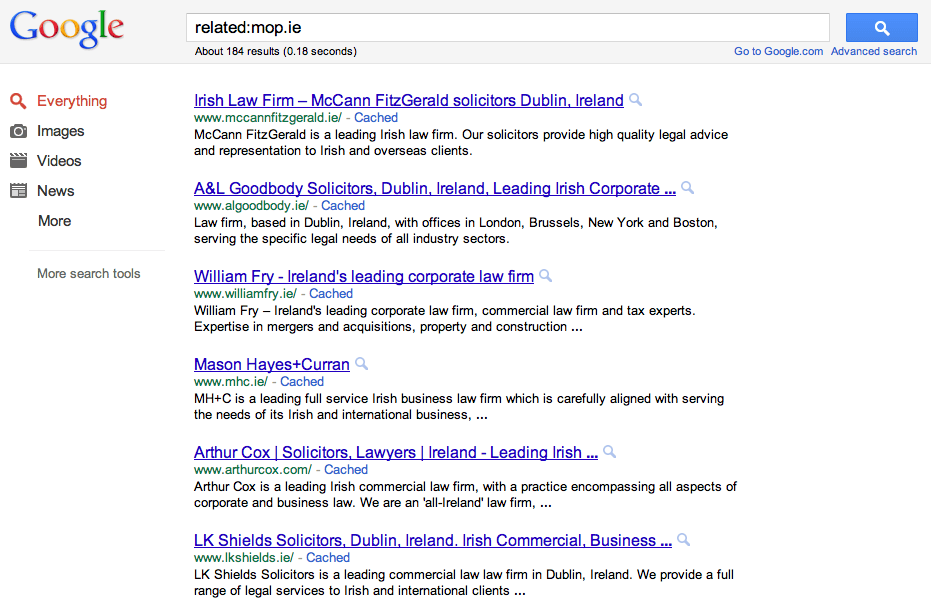 Sure enough, it fairly accurately lists nearly all of MOP’s competitors which include Arthur Cox, A&L Goodbody, Mason Hayes Curran and William Fry.  A good recruiter working for Matheson Ormsby Prentice or working on their behalf can now go target staff working in these firms by searching their database of CVs or searching on LinkedIn etc.

This is particularly useful for agency recruiters who tend to work for new clients in new industries all the time; competitive intelligence is what will enable you to beat other recruiters to the right candidates and also help you build a much stronger shortlist.  This little trick on Google takes no more than 5 seconds but can produce powerful results.

Have you ever used the old “Similar” tag or its underlying search command, the related tag?

PS; this doesnt work so well on new websites or smaller companies who may not be indexed too well on Google.  If your client is one of these companies, ask them who their largest, most well know competitor is and then run the search for that company.