The Most Effective Way of Contacting Passive Candidates

Houston we have a problem. The vast majority of us are currently completely at odds with our candidates when it comes to how to contact them about job opportunities.

Earlier this year we conducted our annual Global Recruiting Survey, in which we endeavoured to discover which candidate communication methods are most popular among recruiters and which were the most effective. After asking almost 1,000 recruiters worldwide, we found that most recruiters (81%) choose to send either a LinkedIn connection request or a LinkedIn InMail to a passive candidate in order to first engage with them. Only 14% take the time to find an email address, and only 5% pick up the phone and try to reach talent the old fashioned way: 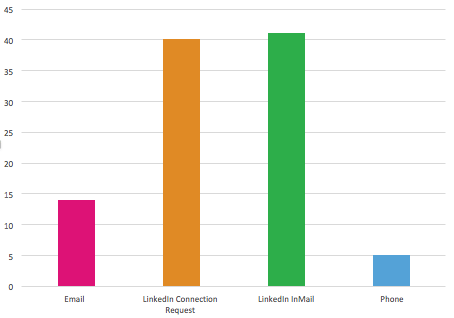 The results are coherent with the fact that most recruiters spend the majority of their time on LinkedIn. 97% use it to search for talent, so it’s not surprising they also use it to reach out to top talent once they’ve found them there. But there’s a problem. While recruiters are ploughing most of their time and effort into finding and contacting candidates on LinkedIn, the professional networking site is actually one of the least popular methods of communication among potential candidates. 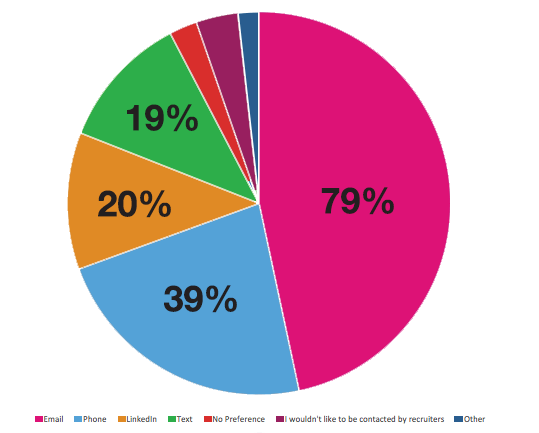 And the results were the same for the most part across all demographic age profiles, apart from the fact that LinkedIn is even less popular with candidates aged 35-44 and 45-54, who actually prefer to receive a text from a recruiter over and above a LinkedIn InMail or connection request:

The Most Effective Way of Contacting Passive Candidates

“Well, let’s just start contacting candidates by email then!” I hear you say. Well, unfortunately it’s not quite that simple! 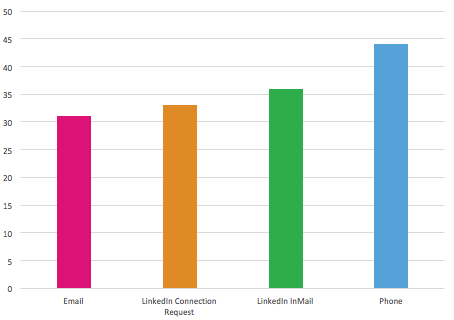 But if recruiters who use the phone are having far more success when contacting candidates why aren’t more recruiters picking up the receiver and dialling? Well, the No.1 reason our respondents cited for not using the phone was that they didn’t have the candidates contact details (41%)… But I’m afraid that excuse isn’t going to cut it any more recruiters. And while we know only a small number of people include their phone numbers on their social and professional networking bios, it doesn’t mean that finding a contact number is completely out of the question.

How to: Find Anyone’s Phone Number

If you know a potential candidate’s full name and the name of the company they’re currently working for, you can find the phone number of where they work very quickly on Google Maps. Think about it – you’re sitting at your desk right now doing your job. So, chances are your potential candidate is doing the very same thing. So, to get them on the phone right now, all you need to do is know the phone number of where they work. Something which is really easily found on the world’s largest business directory: Google Maps.

Go to google.com/maps, type in the name of the candidate’s company and it’s location (e.g. city/town if their are multiple locations in a country), click ‘Search’ and not only will Google show you the exact address for the premises, but it will also show you the landline phone number of that particular office: 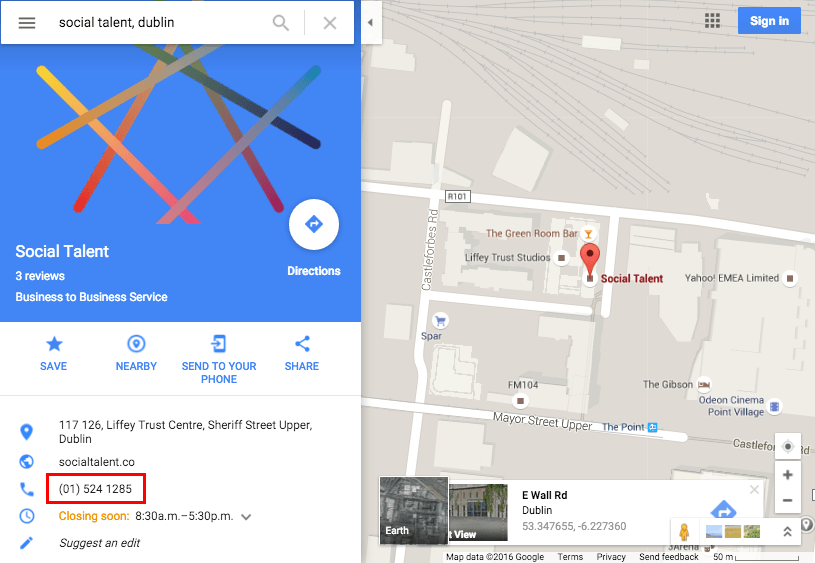 You can do this with any organisation no matter where you are and the best thing is, the number listed is usually better than the phone number stated on the company’s website – a number which usually goes to a call centre and isn’t actually answered at that particular location.

So, now there really is no excuse for not knowing someone’s contact details!

How to: Engage Passive Candidates Over the Phone

Now that you have their phone number, it’s time to pick up that dial and call your candidate. And to help you conquer your phone demons and start successfully engaging passive candidates over the phone, we’ve decided to treat you guys to an entire episode of our Black Belt in Internet Recruitment online training programme for FREE. Yep, you heard us, free, gratis and for nothing!

We’re giving you Access All Areas to the “Using the Phone” episode of our “Engaging Talent” module, where you’ll learn how to tackle the dreaded “Gatekeeper”, how to determine and stick to your objective during the call and how to close the call effectively so that your response rates rise dramatically.

To watch, simply fill in your details below and we’ll bring you straight to the videos: