How many unread emails do you currently have in your inbox? I have 12. My colleague Reza has 11, George has the slightly larger number of 473, while Laura has a staggering 26,532…

It’s not that we all actively decided not open and to ignore these unread emails, the truth is we were probably all busy when they arrived on our inboxes. By the time we had a chance to look at them, 10 new emails had arrived in our inboxes, pushing those other emails further down and out of sight. And you know what they say; “out of sight, out of mind”.

The fact is, the same thing happens to the candidates we email. It’s not that we’ve done anything wrong in our initial email communication – we’ve used a killer subject line and the strategic 3-sentence approach – a certain number of people just won’t come back to us. Not because they’re not interested in the role we have to offer (although invariably some recipients will not be interested), but because they’re busy, or they don’t receive your email, or they simply forget to reply to you. This happens all the time, and the unread emails and my and your email inbox are testament to that fact.

But what can we do to combat this? The answer is staggeringly simple: follow up. In order to increase your candidate response rates, you should be following up on every candidate email you send. Getting a high response rate is not just about getting everything right in the initial contact (although it helps MASSIVELY!), it’s also about following up.

Research tells us that most emails (91%), if they are going to be opened, are opened within a 24 hour period. Furthermore, 90% of emails that receive replies, receive those replies within 24 hours of being opened. So, the fate of your first email contact will definitely be decided within that period of time.

91% of the time, an email is opened within ONE day after you sent it = Follow up within 24 hours. #sourcecon

It’s easy to tell when someone has opened your email, all you need to do is start using a free email tracking tool like Sidekick, which will tell you (in real time) when a candidate has opened your email. But if you see that they’ve opened your email, yet you don’t receive a response from them within 24 hours, you should start thinking that you might not get a reply from that first email. After 24 hours, the likelihood of a response falls from 90% to just 3%. Therefore, if you don’t receive a response, be sure to follow up within 48 hours. The fact that they haven’t responded does not mean they are not interested. As I mentioned earlier, they may have been busy when they received the email, or simply forgotten to reply. Silence does not mean no. No means no.

You don’t necessarily have to use the same medium to follow up with a candidate. If you initially reached out via email, why not try calling them or sending them a tweet? Not only is it another means by which to catch their attention, it also shows the candidate that you are interested enough in them to put the time and effort into finding another means by which to contact them.

Quite surprisingly, being persistent was something a panel of highly sought-after candidates at this year’s SourceCon Seattle, said they respect in a recruiter. When asked why they didn’t engage with recruiters, several participants said that they like to be chased. They expect to receive a number of messages from a recruiter before they even think about replying. Remember, these candidates are being courted by several different recruiters at once, so they will only respond to those who show them the most interest.

If you’re looking for an exact number, research tells us that the average number of follow ups it takes to get a response is 3. What the following chart illustrates is that by continuing to send more emails, you create more opportunities for your recipient to reply: 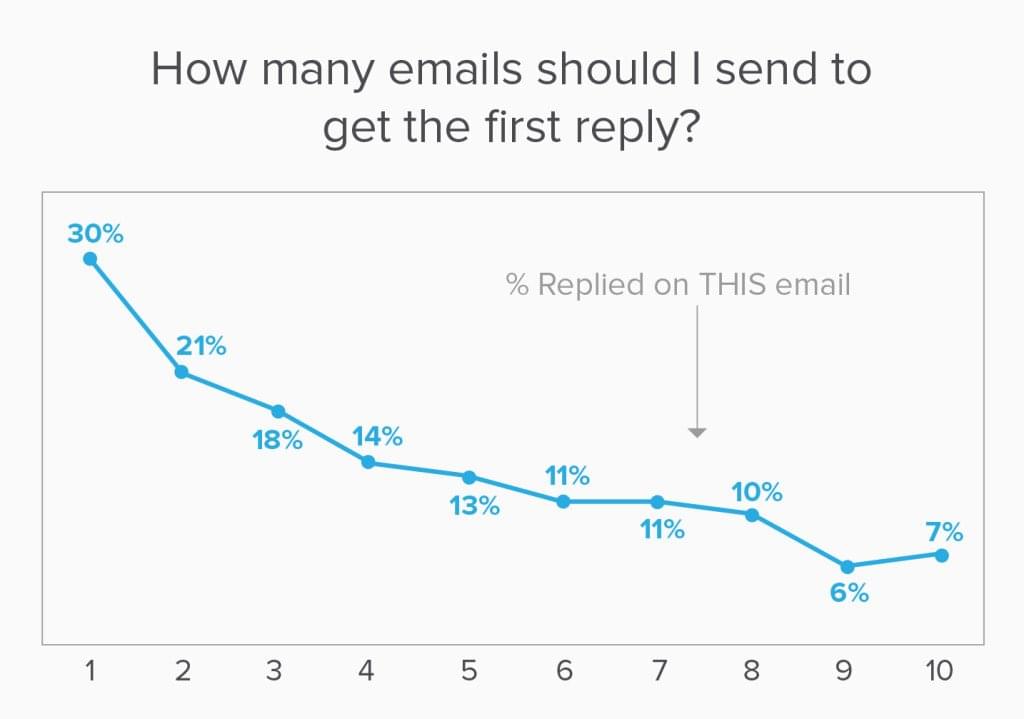 It is a study in scale. Greater volume of emails should correlate to greater total response, and the chart above shows this to be true.

How many emails should you send to get an initial reply? (On average, 3) #sourceconpic.twitter.com/RlJ9hhRqFg

Use a follow-up tool

If I want to remind myself to follow up with a candidate next Wednesday, at the same time I’m emailing that candidate, I’ll BCC nextwednesday@followupthen.com.

Finding good candidates takes a lot of time. You know that! So when you’ve found a great candidate be sure to rule them in or out before you re-start your search. Remember: Follow up, follow up, follow up! If you don’t receive a response from your candidate to your first email. Send another one. Send numerous emails if you have to. The more you send, the more opportunities  you give the recipient to reply. And if you think you won’t remember to follow up, use a service like FollowUpThen or download Boomerang and let it do the work for you.

And finally, I’ll leave you with the wise words of Matt Charney:

As someone who kept cold calling a dead candidate before his widow asked me to stop, there is such a thing as too much followup. #sourcecon