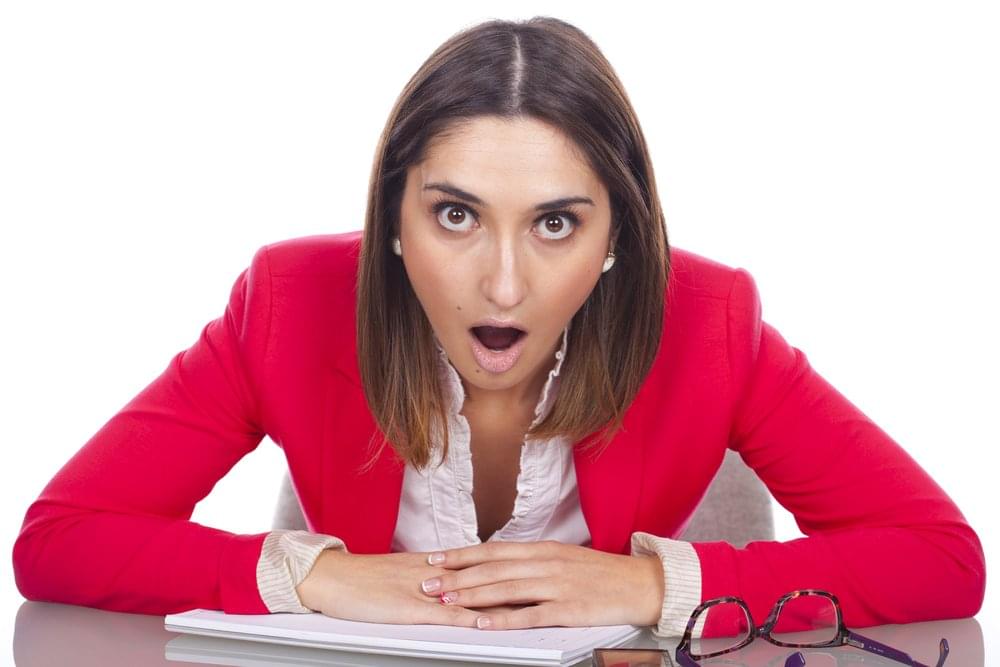 *This article originally appeared on Buzzfeed.com.

Buzzfeed recently asked members of their BuzzFeed Community to share with them their worst interview experiences. These are the rather cringeworthy results!

“I had a video interview for a very large company. The computer would ask a question and record your answer to send to management. You had 30 seconds, no more no less, to answer the question. For one question, I ran out of things to talk about so I decided to stand really still and not blink for 15 seconds to make it look like the video froze…

That’s probably the reason why I didn’t get the job.”

2. The Breast Interview EVER.

“I used the term abreast while answering a question about technical expertise. No big deal except I couldn’t stop using it after that. I said abreast approximately 10 more times…it was a tragic broken record that I just.couldn’t.stop.”

“I was in an interview for a spa, and while the interviewer was looking at my resume, she asked about when I worked at a dog groomer’s. She asked about my experience there, what my favourite dog was, and what I did during my time at that job. I answered both questions like a rockstar, BUT THEN she asked me, “so did you handle the duties?” I thought she meant “doodies”. I was like “oh yeah, all the time. It got kinda messy sometimes, but it’s part of the job, so I didn’t mind”. She looked at me, kind of confused for a sec, and then I realised she meant “job duties”. I looked at her, and then, very loudly, went “oh my god, I thought you meant poo-doodies, not ‘duties’!” And then I couldn’t stop laughing out of nervousness and sheer terror.

Didn’t get that job.”

“The woman interviewing me for a job as an assistant for a magazine asked me what a weakness of mine was and I replied very seriously:

“Well, I do not know how to hoolahoop”.”

“I was young and the only stockings I had were the kind that attach to garters. As the interviewer and I walked to her office, I felt the first two garters snap. When I sat down across from her, I felt the remaining two garters snap. I knew when I stood up my stockings would fall to my ankles. I spent the entire interview fishing under my skirt with both hands trying to attach one garter to each stocking. The interviewer probably thought I was diddling myself!

Didn’t get the job, but I did get out of there with my stockings in place!”

“I was once asked what type of furniture I’d be, and rather than thinking through the best way to phrase my response, I blurted out “lawn chair because I’m cheap and easy”. I immediately regretted my impulse answer.”

“Wore my shirt backwards by accident and spent the whole interview with a red face trying to hold my neck just in case she could see my tag seams.”

“A few years ago, I was interviewing at an organic grocery store. The interview was held in an upstairs office. Once done, the lady who interviewed me walked me downstairs. Being the clutz that I am, I tripped walking downstairs. On my way down, I grabbed the interviewer lady’s hair (hard) to try to help myself. I pulled her all the way down with me and we both tumbled down a few stairs. She tried to be cool about it, but she was very obviously pissed that I pulled her hair in an attempt to save my clumsy ass. Not to mention, I’m pretty sure I must have ripped out some of her hair.

Needless to say, I never got called back.”

“I once panicked after getting a call back while cooking and ran outside away from my barking dogs with only the phone, a knife, and a potato where I accidentally locked myself out and told the employer “sorry, sorry, hold on I’m writing the number on a potato”. In the next interview, I accidentally said fuck.

Still got the job.”

“I pretended to sneeze because I was trying to think of an answer. It was super obvious that it was fake, and one of my interviewers laughed.”

“I was looking to move departments when I worked for my school’s library and I had an interview with one of the directors in his office. I was trying to make small talk and noticed a picture on his desk of a woman and a dog. I gestured toward it and said “is that an Irish Setter?” He looked up at me, paused, and with the straightest face said “no, that’s my wife”.

I ended up getting the job.”

“I went to the bathroom prior to my interview…turns out I sat through the entire interview with my fly down.”

“The interviewer asked me “if you were a car part, what part would you be?” I got really nervous and went on a nonsensical tangent about how I would be the wheels and then just stopped abruptly mid–sentence. After about 15 seconds of silence, she says “…can you elaborate?” and I panicked and blurted out “well, actually I’m a person and not a car, so no”.”

“Closed by accidentally saying “Thanks so much! Have a bad day!””

“During an interview I had “Everything Comes Down to Poo” from the My Musical episode of Scrubs running through my head. I kept laughing, but tried to play it off as a tickling cough.”

“Flew in for an interview, had 102 fever. When one of the interviewers asked if I had flown in that morning, I responded “yes, and boy, are my arms tired!” Crickets. Not a sound in the room.

Needless to say, I did NOT get the job.”

“I was talking so fast I didn’t realise I drooled on the conference table!”

“I interviewed for this secretarial position and when I arrived they showed me into this little conference room and told me to have a seat. As I sat down I felt the zipper on the back of my pencil skirt burst open. So I sat through the whole interview trying to figure out how I was going to to get up and walk away without having the two people interviewing me notice the giant gaping hole in my skirt where my very professional (forgot to do laundry) bright green underwear was showing through.

So when the interview was over…and we finally got to the office lobby I thought I might be home free, but they stood there waiting to see me out…and I had to just hold my head up high and walk out of there with half the office staring at my ass.

I did not get a call back.”

“Nothing says confident like crying when asked what your weaknesses are.”

“My friend dragged me to an open interview for a new restaurant that was opening…I was asked the question “if you could be any kind of soup, what kind of soup would you be?” I said “well, there’s already a pea soup, so I would be a poo soup”.