How Badly is Your Unconscious Bias Affecting Your Recruiting Skills? 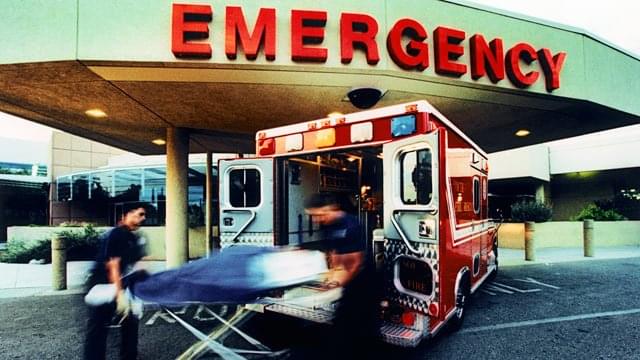 A father and son were involved in a car accident in which the father was killed and the son seriously injured. The father was pronounced dead at the scene of the accident and his body taken to the local morgue. The son was taken by ambulance to a nearby hospital and immediately wheeled into an emergency room. A surgeon was called. Upon arrival, and seeing the patient, the attending surgeon exclaimed, “Oh my God, it’s my son!”.

My question to you is, who is the surgeon?

Did you work it out? If not, have a think about it and maybe read the piece over again, because about 40% of people usually get this wrong.

Answer: The surgeon is the boy’s mother. Yes, many of the people who come into contact with this story (maybe you too were included) don’t realise that the surgeon could be the son’s mother. They read the story, they picture the surgeon, and they automatically picture a man.

This is an example of how bias, and in this case gender bias specifically, plays out in our minds and in our thought process. But what is bias and why did it case many of us to automatically assume that the surgeon would a man?

Bias is an inclination or prejudice for or against one person or group. In other words, bias are unconscious feelings we have towards other people – unconscious feelings that play a strong part in influencing our judgement of certain people and groups, away from being balanced or even-handed, in many different areas of life.

One of the most prominent areas of life where bias can play out is the workplace. In fact, one of the strongest bias we have in the workplace is gender bias. Why? Well, our feelings about gender and the stereotypes we’ve all associated with gender are something we’ve developed throughout our whole lives. How we’ve been brought up, where we’ve been brought up, how we’ve been socialised, our socialisation experiences, our exposure to other social identities and social groups, who our friends are/were, and media influences, all affect how we think and feel about certain types of people – and especially about what makes a man a man and what makes a woman a woman.

It’s important to mention however, that most bias stereotypes, do not come from a place of bad intent. Just because you didn’t guess that the surgeon was a woman doesn’t make you a bad person with a hatred of women. It’s just a deep seated, unconscious stereotype that’s been formed in our brains through years of different influences we often had no control over. For example, just think about of all the phrases you’ve heard associated with women in the workplace over the years, like “The Glass Ceiling”, “The Maternal Wall” and the “Gender Pay Gap”.

How Does Bias Affect Our Actions?

Our bias affects us and our decision-making processes in a number of different ways:

Whether we are aware of it or not, each and every one of these things will affect who we select for interview, how we interview them, who we hire and our reasons for hiring them. Which brings me to my next point – how our bias affect the way we recruit.

How Do Our Bias Affect the Recruitment Process?

In recruitment, the following types of bias are all very common:

Conformity Bias
Based on a famous study that’s been around for decades, conformity bias relates to bias caused by group peer pressure. In the study, a group of people are asked to look at the following picture and say which line in Exhibit 2 matches the line in Exhibit 1:

Just think how this may play out in a panel talking about a candidate. If an individual feels the majority of the group are leaning towards/away from a certain candidate, they will tend to go along with the group think rather than voice their own opinions.

Beauty Bias
This is the view that we tend to think that the most handsome individual will be the most successful. But this can also play out in terms of other physical attributes a person may have. For example, while 60% of CEOs in the US are over 6 foot, only 15% of the total population is over 6 foot tall. And while 36% of US CEOs are over 6.2 feet, only 4% of the US population is over 6.2 feet tall. So again, this shows some bias in terms of how we perceive a CEO should look like.

In recruitment, it’s common that recruiters will look to fill a role with someone who shares similar physical attributes to the person who held that role before or who they believe looks like the kind of person who should have the role based on their preconceived bias.

Affinity Bias
This plays out a lot in terms of recruitment! Affinity bias occurs when we see someone we feel we have an affinity with e.g. we attended the same college, we grew up in the same town, or they remind us of someone we know and like. 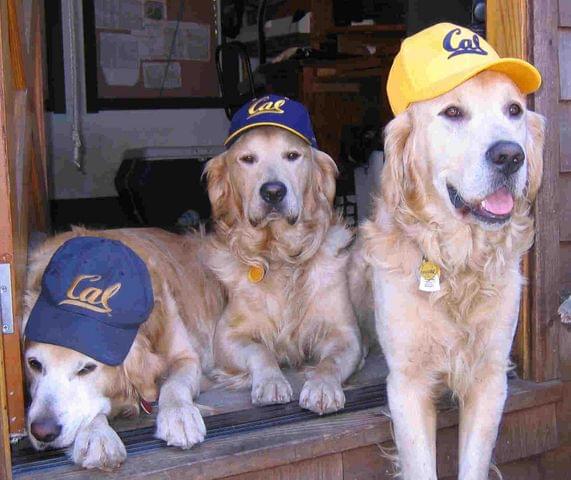 For example, when we interview someone we feel we have some affinity with, our micro-affirmations play out a bit more than they usually would with someone we felt we didn’t share an affinity with. For instance, if they tell us they’re a little nervous we may smile at them more, offer more words of encouragement etc. Whereas, if a person we shared no affinity with told us the same thing, we wouldn’t be quite as warm towards them as we had been to the candidate we felt we shared a connection with. After the interview, you’d then speak in much higher terms of the first candidate and how much you feel they’d “fit in” over and above the second candidate.

Halo Effect
Halo is when we see one great thing about a person and we let the halo glow of that significant thing affect our opinions of everything else about that person. We are in awe of them due to one thing.

For example, when looking through someone’s CV/resume we may see they went to a particularly highly regarded college where they received a certain high grade, or they had undertaken some very sought after work experience program. Upon seeing that, we tend to see everything else about that person surrounded by the glow of that achievement.

The opposite of this is the “Horns” effect, where we see one bad thing about a person and let it cloud our opinions of their other attributes.

Similarity Bias
Naturally we want to surround ourselves with people we feel are similar to us. And as a result we tend to want to work more with people who are like us.

In terms of recruitment that may mean that we are more open to hiring individuals we see parts of ourselves in.

Contrast Effect
This plays out regularly in recruitment, particularly amongst recruiters who spend large amounts of time sifting through CV after CV or conducting interview after interview. If we’re looking at a number of CVs/interviews in a row, one after the other, we tend to compare each CV/interview to the one that came before it. We judge whether or not the person in front of us did as well as the person that came before them. When really, the only thing we should be comparing are the skills and attributes each individual has, to the skills and attributes required in the job, not those of the person that came directly before them.

Attribution Bias
This is the most common form of bias in the recruitment process as it affects how we access other people. When we do something well we tend to think it’s down to our own merit and personality. When we do something badly we tend to believe that our failing is down to external factors like other people that adversely affected us and prevented us from doing our best. 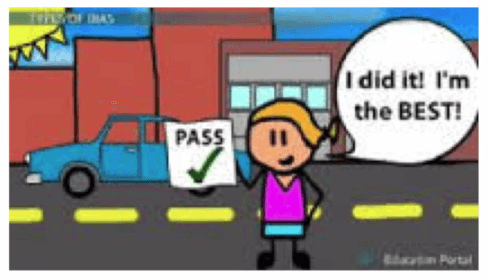 Conformation Bias
This is one recruiters have to be extremely careful about! When we make a judgement about another person, we subconsciously look for evidence to back up our own opinions of that person. We do this because we want to believe we’re right and that we’ve made the right assessment of a person. The danger of conformity bias in recruitment, is that our own judgement could be very, very wrong and could cause us to lose a great candidate for the job.

Ok, now that you know what bias is and how it can affect the recruitment process, it’s time to try a little experiment. Find a digital copy of the last job ad you wrote. Highlight the text, right click and copy it in its entirety. Next, go to a website called gender-decoder.katmatfield.com. Then right click and paste your job ad into the text box provided.

In this example we copied and pasted a random job ad from Indeed for an Online Channel Content and Project Executive: 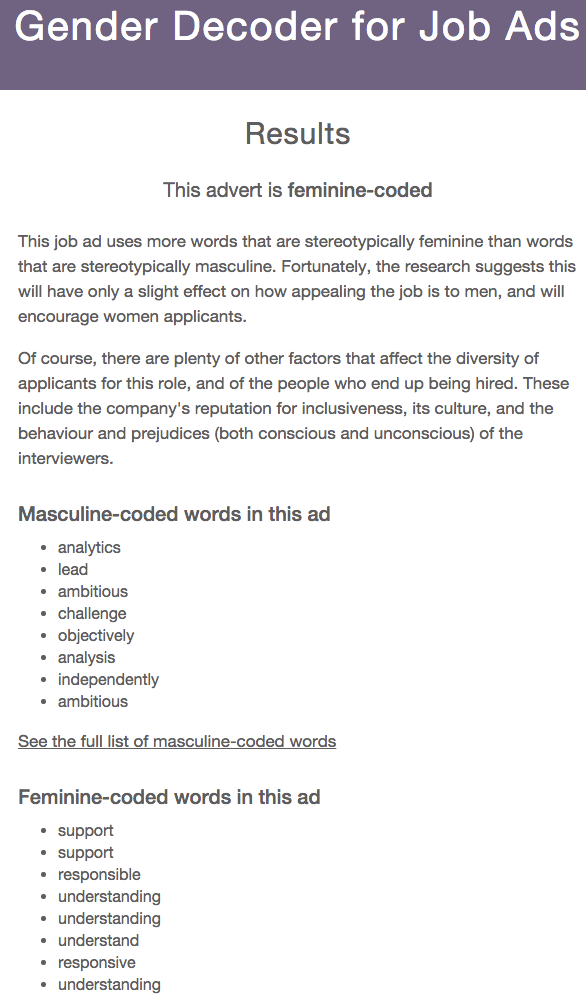 Fortunately, according to the Gender Decoder, the research suggests that this will have only a slight effect on how appealing the job advertised is to men, and will encourage women applicants. However, ads that have more stereotypically masculine words will risk putting women off applying. So test your job ads and see whether or not your particular gender bias has affected how you’ve written your job ads. You might be surprised at the results!

So how can you deal with bias and try to limit its affect on your decision-making during the recruitment process? Well, one of the best ways to look at your bias is to use what’s known as the Harvard Implicit Association test – an online assessment you can take for free to discover your unconscious bias. Take the tests (the gender one in particular), and find out how much or how little bias you have towards different members of society. By discovering your unconscious bias you’ll develop an awareness of them and open yourself up to change.

In terms of actions you can take to reduce bias, we recommend the following:

Once we acknowledge our bias we can start to develop and use them to make sure we’re treating everyone fairly. It’s important to remember once again, that most bias stereotypes, do not come from a place of bad intent. Bias is something learned over many years and compounded and moulded as we progress through life. We just need to acknowledge their existence, how they affect what we do as recruiters, and actively work on ways, like those listed above, to eliminate them from the recruitment processes.

In September 2015, Social Talent will be adding an entire online training module (taught by Claire Mulligan) on the issue of bias, its affect on the recruitment process, and the issue if hiring for diversity to our Black Belt in Internet Recruitment training course. If you’d like to get a first look, click here to request a demonstration of our online platform with a member of our amazing Sales team.