Most Popular Social Networking Sites in Ireland (May 2013 - INFOGRAPHIC) 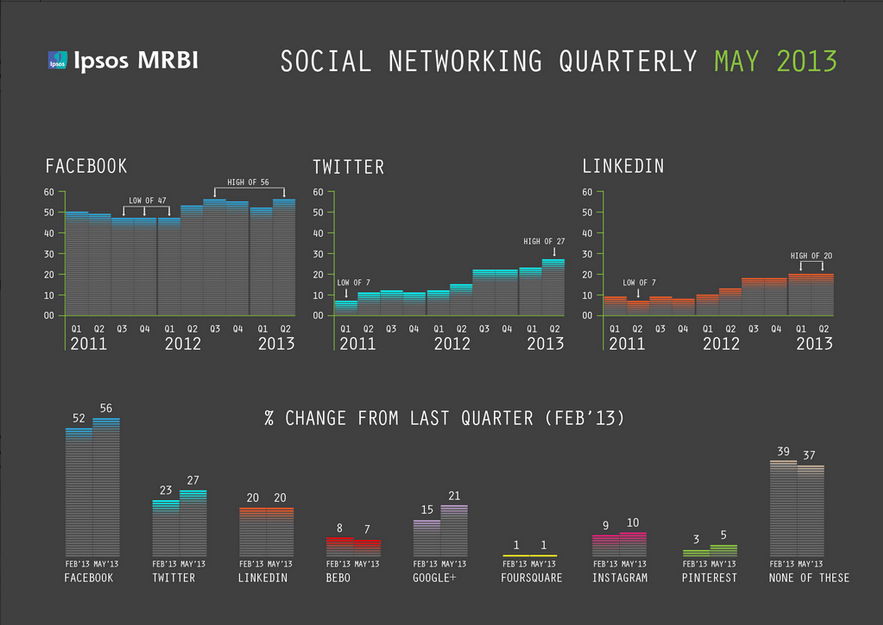 TheJournal.ie this morning posted one of the most telling infographics of the year so far; the percentage of Irish people currently using social networking sites, as well as how much that use has grown in the last 2 years.

Perhaps not surprisingly, Facebook is still the daddy of social media in Ireland with over half of the population making it their social network of choice, but what’s nice to see is Twitter nipping closely at its heels. Twitter has grown consistently in the last 2 years, from less than 10% of the population logging on in 2011 to 27% in 2013. New add-ons like Vine can only help add to the success of the micro-blogging site as users start to use the site in new and different ways.

Unfortunately for recruiters perhaps, LinkedIn has endured somewhat static growth since 2011 but it does continue to slowly draw in Irish professionals. 20% of the Irish population are now using the networker’s network and as the popularity and use of the site continues to grow worldwide, Ireland’s use of LinkedIn can expect to grow with it.

Interestingly, Google+ (the most popular social networking site in the USA and the 2nd most popular in the world) grew by a significant 6% from 15% to 21% between February 2013 and May 2013, but still has a way to go before it catches up to Mark Zuckerberg’s rival site. Similarly, photo sharing sites are also growing in popularity amongst the Irish with both Instagram and Pinterest gaining users.

But while we could get carried away with the growth stats here for each individual site currently available to the Irish market, what’s extremely important to note is that over a third of the country still don’t use any social networking sites whatsoever. However, that figure is falling and with the planned expansion of broadband in this country currently underway, we should expect to see this percentage to drop over the coming years.

What’s your social network of choice? Do these figures surprise you? As always, let us know in the comments below.