Another Win for Diversity: Deloitte to Remove Education from Grad CV’s to Prevent Unconscious Bias

In yet another move towards greater diversity amongst professional services firms, and following moves from the rest of the Big 4 earlier this year on negating educational performance for graduates, Deloitte will now hide where graduate applicants went to school or university from recruiters in a bid to prevent unconscious bias.

Deloitte UK’s aim is to unearth candidates who have great potential and come from different backgrounds than what has been traditionally a narrow range of colleges, universities and social backgrounds.

According to the BBC, Deloitte will take a university-blind approach to selection, so that the name of the applicant’s university will not be known. Senior partner and Chief Executive of Deloitte UK, David Sproul, said “Improving social mobility is one of the UK’s biggest challenges.” He remarked that their business saw it as imperative they hire “people who think and innovate differently, come from a variety of backgrounds and bring a range of perspectives.”

Side note:
I suppose it’s very timely, all this diversity stuff! Our upcoming Monthly Webinar, which broadcasts this coming Wednesday October 7th at 4pm BST, will be focused entirely on Diversity! Register here for this free webinar. 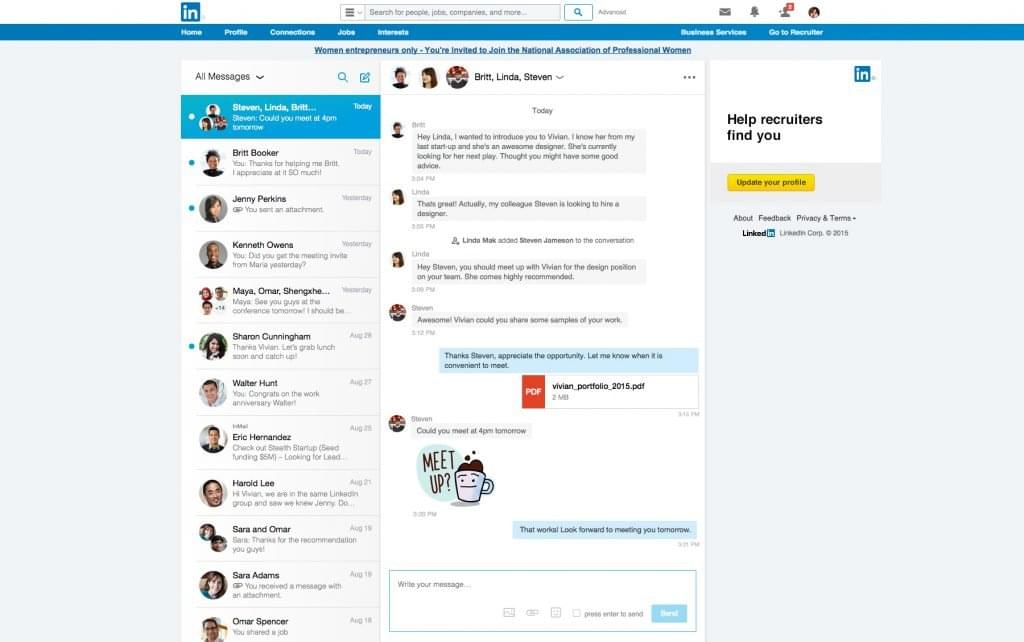 …And the reviews are in. It’s a million miles better than it was before, but there are a few flaws and many doubters.

In case you’ve been living under a rock, or LinkedIn think you do, the widespread roll-out of their new and very very much improved LinkedIn Messenger has hit the vast majority of LinkedIn users.

This new messenger system, announced on September 1st by LinkedIn, sees LinkedIn Messenger finally enter this decade, adding support for Emojis, a chat-style interface for keeping your conversation with fellow LinkedIn members (including group chats) in one place, and roping in some millennial-favourites like stickers and gifs.

The new Messenger app so far has received a lot of praise, but also an overwhelming amount of criticism.

Not liking the new LinkedIn messenger, which made professional conversations too casual. Getting a job invite as a chat? Whats next? Emoji?

Finally got updated to the new Linkedin messenger. Like FB messenger, but 5 years later. pic.twitter.com/S7WGgqvQZw

Some issues with the new Messenger that have been raised thus far, are:

Our score? 3 out of 5. Great to catch up with what every other messaging app on the planet has been doing for some time, but shows utter lack of imagination or innovation for business messaging.

What are your thoughts of the new Messenger so far? Put them in the comments! 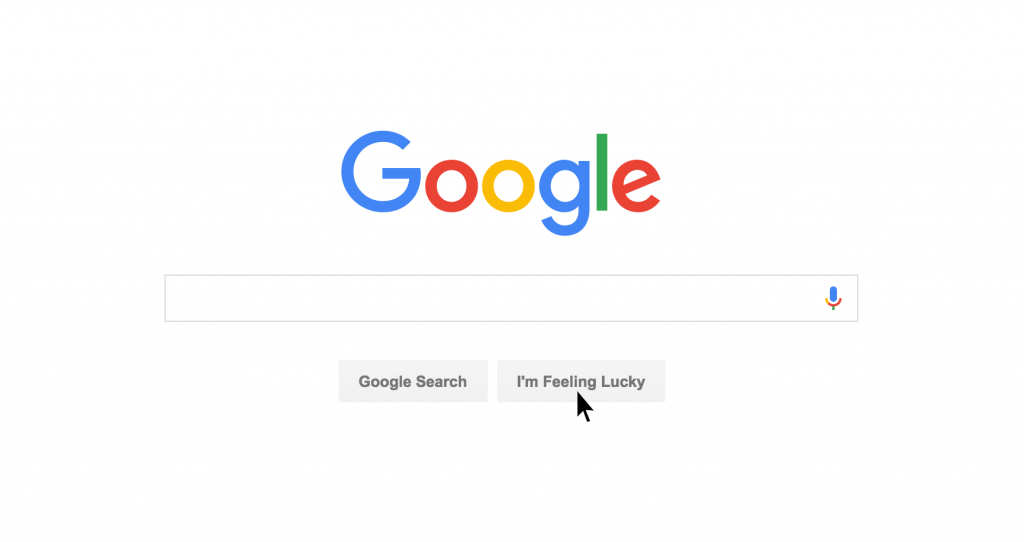 Former Google employee, Sanmay Ved, managed to purchase the world’s most popular domain Google.com, from Google’s very own new domain sale service last Friday. According to reports, Ved was shocked when it was shown it was available to buy, so he clicked the “add to cart” button. “I was hoping I would get an error at sometime saying transaction did not go through, but I was able to complete the purchase, and my credit card was actually charged,” Ved said to Sky News.

According to Sky, ownership of the domain was officially transferred to Ved, but minutes later he received an email from Google saying they had cancelled the order.

We can only imagine the pandemonium that ensued in the Site Reliability Team’s office when they (admittedly, quickly) spotted the DNS record change. Google has been undergoing a major structural change, renaming the parent company Alphabet, although another major oversight was not purchasing “Alphabet.com”, which is owned by BMW apparently. It instead went for ABC.xyz. Oh dear…

It’s been revealed this week that 415 companies of 780 surveyed, (including Facebook, Tesla Motors and Netflix) in the USA have included Gender Reassignment therapy to their health insurance policies for all of their employees. According to the Human Rights Commission, just 49 companies offered such schemes as part of their C&B package in 2009.

The addition of the therapy has been seen by many as a move towards greater commitment to diversity within their workforce, but enables companies to compete for talent with a benefit that is rarely cashed in on (only one in 10,000 to 20,000 employees typically uses gender transition coverage per year).

However, according to Glassdoor’s latest survey, 79% of people would prefer extra perks in their Benefits package than a pay-rise, so I guess they know exactly what they’re doing! 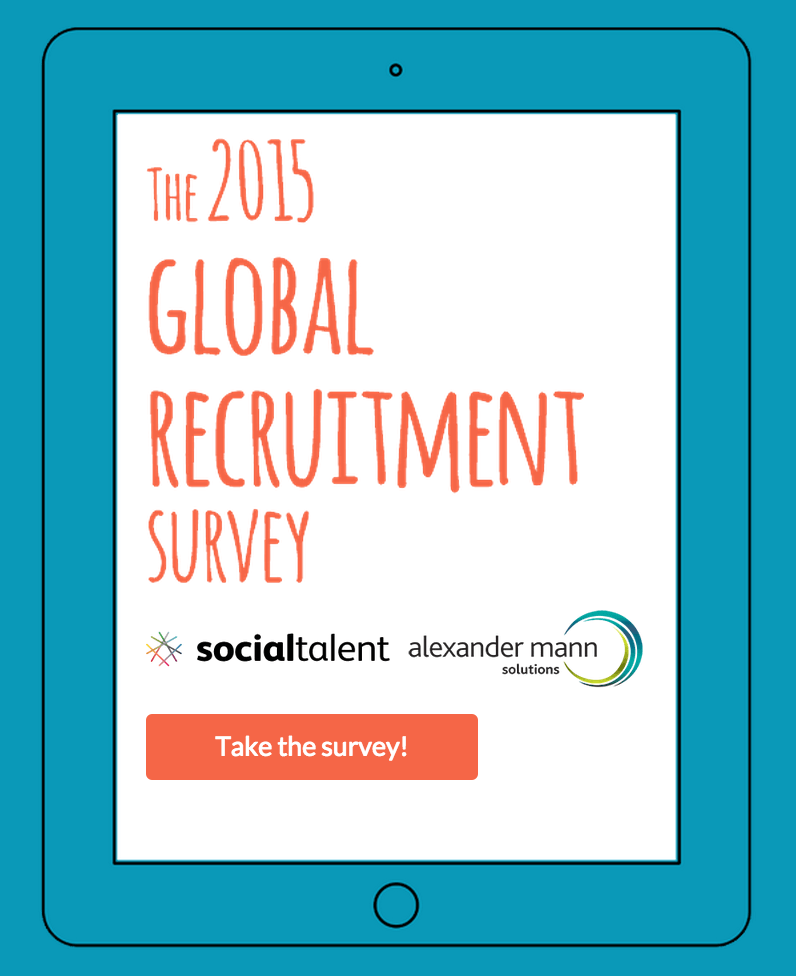 The Launch of the Global Recruiting Survey 2015

We’re delighted to announce for a second year, in partnership with Alexander Mann Solutions, that the Global Recruiting Survey for 2015 is open for two weeks from today accepting submissions.

We learned so much from you all in last years’ survey in the skills, habits and tools used by sourcers and recruiters in your daily jobs. Our 2014 Global Sourcing Survey was read by thousands of recruiters, was quoted in hundreds of keynotes and influenced even more companies when building out their recruiting strategies for 2015.

This year we’re asking you to help us build our most representative survey yet. With your input, we can build a really clear picture of how the world hires talent and more importantly, what works best.

Click the big green button to take the survey (it would take no more than 10 minutes of your time) and help us change the way the world hires talent!

If They Can Find Water on Mars, We Can Find Talent on Earth?…

Did that thought go through your recruitment-head as well? Glad it wasn’t just us so!!