In Part One of How to: Recruit on Twitter, we discussed some facts and figures about Twitter and explained a lot of the terminology surrounding the site, that can often confuse first time Tweeters. In Part Two, we’ll be delving into the duel aspect of using Twitter to find great candidates: What to do when tweeting your jobs, and how to find candidates on Twitter.

If you are mainly using Twitter to advertise your job openings there we have two main recommendations for you:

When advertising your jobs on Twitter make sure you include relevant hashtags to your tweets in order to make your offering more searchable to suitable candidate. The likes of #jobs and #graduatejobs are all commonly used. If you’re unsure of which hashtags to use, type ‘jobs’ into the search box in Twitter and see the hashtags other recruiters have used. You can refine this even further by filtering the results by the city you’re hiring within, and take note of the more local hashtags that are searched within that city. For example, #jobfairy is extremely popular in Ireland.

Also be sure to # the city or town you’re recruiting within (as above) and any key skills such as #Sales or #Java.

You don’t need to spend every waking minute of the day on Twitter in order to appear active and to have a constant stream of interesting updates and job posts. There are several auto-posting products on the market, to do all the hard work for you. 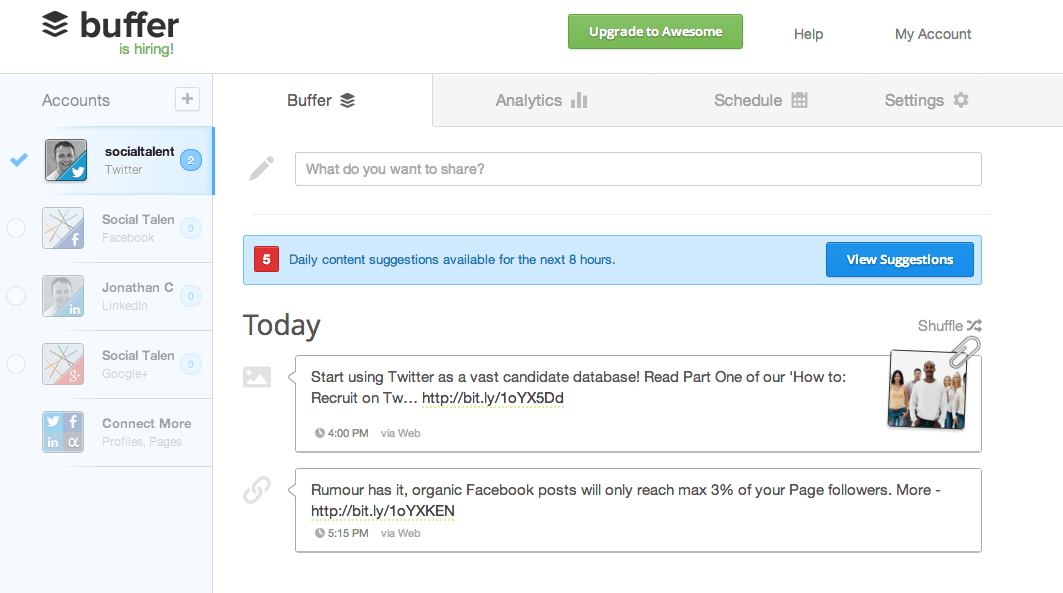 Before I get into how to go about finding candidates on Twitter, I first have to inform you of the limitations surrounding searching for candidates on Twitter. First things first, when you search Twitter you are only searching people’s bios, not there tweets. Therefore, you are limited to what they choose to say about themselves and the 160 characters they have to do it within. Secondly, the location field within the user’s Twitter bio is a free text field which means the user is free to write anything they wish, be that Dublin, Dub, Dublin Ireland, Dub IRL etc., so you need to bear that in mind when searching for candidates in a particular city – be sure to utilise synonyms.

Finally, while there is a search box within Twitter.com itself, it is extremely unadvisable to actually search for candidate bios using Twitter.com. The reason? Well, the results derived from searching Twitter.com are often irrelevant, they’re not sortable, and you are unable to filter your results. So the golden rule is: Don’t use Twitter.com to search Bios and Location. Instead, use a third party product like Followerwonk.

Followerwonk.com is a free to use website that allows you to effectively search the Twitter bios of every single one of the 241 million active users on Twitter. Just be sure to login with your own Twitter profile (it’ll increase the functionality and is nicer to use).

Login on the top right hand side of the page, before clicking the ‘Search Twitter bios’ tab.

Click ‘More Options’ once inside the search Twitter bios tab. Enter all of the keywords you’re searching for in primary search box and select ‘search Twitter bios only’ from the drop down menu, and put the location you’re hiring within (including all it’s synonyms) in the search box labelled ‘Location’. Press ‘Do It’ and off it goes to find the candidates you need. 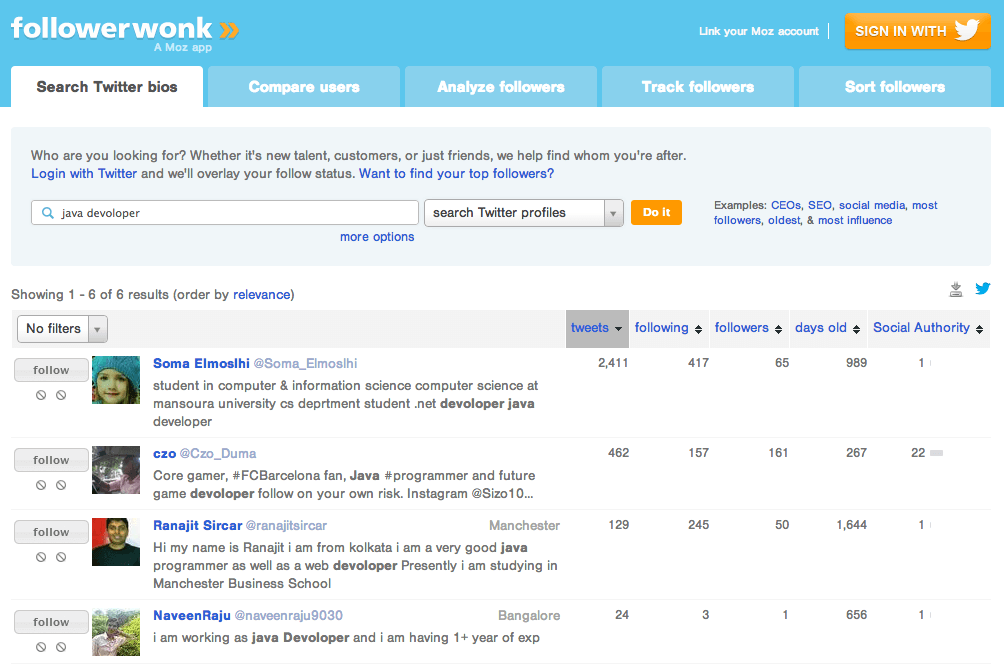 It’s important to note, that although Followerwonk does support Boolean search, it does not support AND, OR and NOT. Use a space between words for the AND, use | for OR, and use – for NOT.

Once you have your list of results in front of you, you can sort them using the columns Followerwonk provides. Active Twitter users (AKA the ones you want to hire) will have lots of tweets, plenty of followers and recent activity. Sort by your results by tweets, followers and days old, to get a real sense of who is truly active on Twitter.

Now that you’ve found the ideal candidate on Twitter, you need to get in touch with them. So how do you go about doing this on a medium that is as personal and as casual as Twitter? The key to great Twitter networking and engagement garnering communication, is in personalisation, getting to the point, and copying the candidate’s style.

Don’t be afraid to use a candidate’s data to personalise your message to them. For example, if I were trying to connect with my colleague Holly, I would use the fact that she was discussing the latest season of TV show Game Of Thrones in her last tweet. I might say something like: 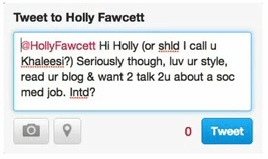 I’ve used data that’s relevant and of interest to her by referencing a Game Of Thrones character, I’ve indicated why I’m tweeting her by mentioning her style and her blog, and I’m using text speak, as I have noticed she’s done in the majority of her tweets. Follow the same pattern by taking note of these 5 golden rules when contacting a candidate on Twitter:

So there you have it, Social Talent’s complete guide for finding candidates on Twitter. Now there’s no excuse for not tapping the vast candidate database that is Twitter.