According to new blog post, LinkedIn currently taking the wraps off a brand new version of its Jobs section, where — alongside details about the job itself — job seekers can now see more data about your company, who works there, and how they compare to previous applicants.

The new look started rolling out to 10% of the site’s English audience last week, covering the U.S., Canada, India, the UK and Australia, with a LinkedIn spokesperson saying it will be expanding deeper into that base, as well as to other regions internationally, early 2016.

Thankfully for us, pricing for job listings will remain the same.

According to Techcrunch.com, for LinkedIn, the thinking seems to be that creating a better job hunting experience could lead to the feature being used more. And in turn, that could lead more employers and recruiters to paying to post listings in the first place. And given that there are dozens of places online to look for jobs today, LinkedIn understands that it needs to go above and beyond the basics in order to stand out.

The new features include: 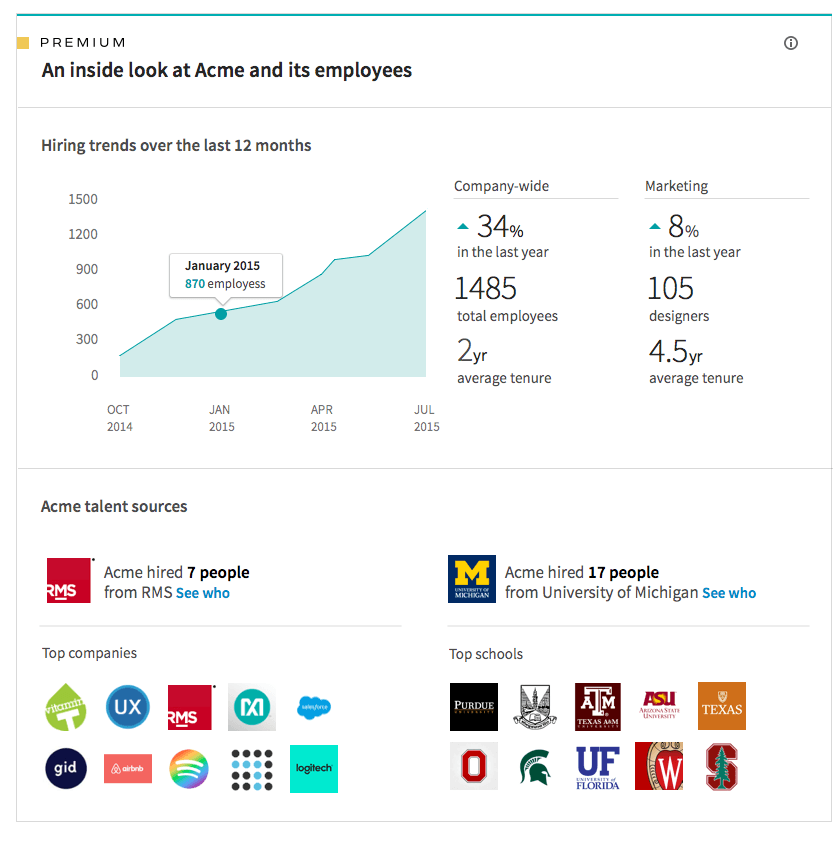 What do you think of the new move? Will it help improve your application rates? Let us know in the comments.

Recruiters Reveal Their Top Priorities for 2016

What should you be focusing on when it comes to planning your 2016 recruiting strategy? What will make the biggest business impact? LinkedIn are trying to help you answer those questions by revealing what over 4,000 talent acquisition leaders around the world consider to be the most important priority for their organisation in 2016.

Here’s what they had to say, in order of importance: 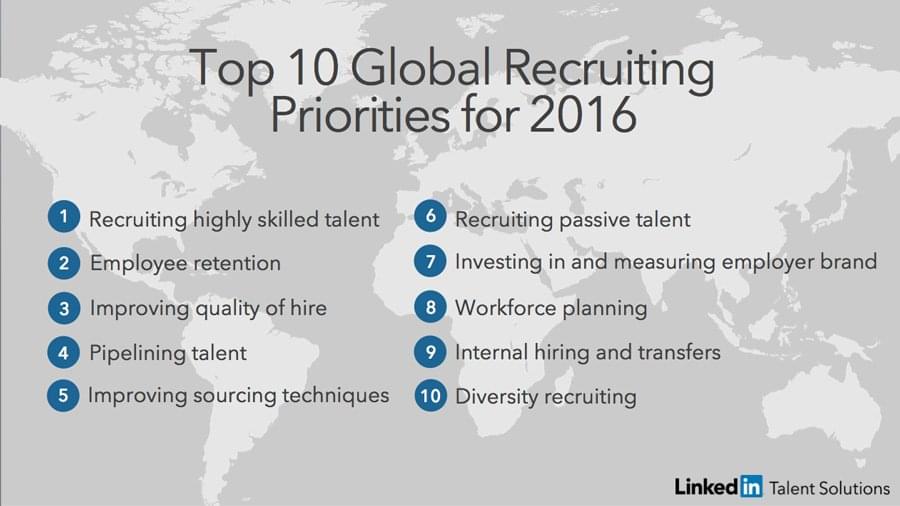 Are you in agreement with the list? Have any more to add? Let us know in the comments below. 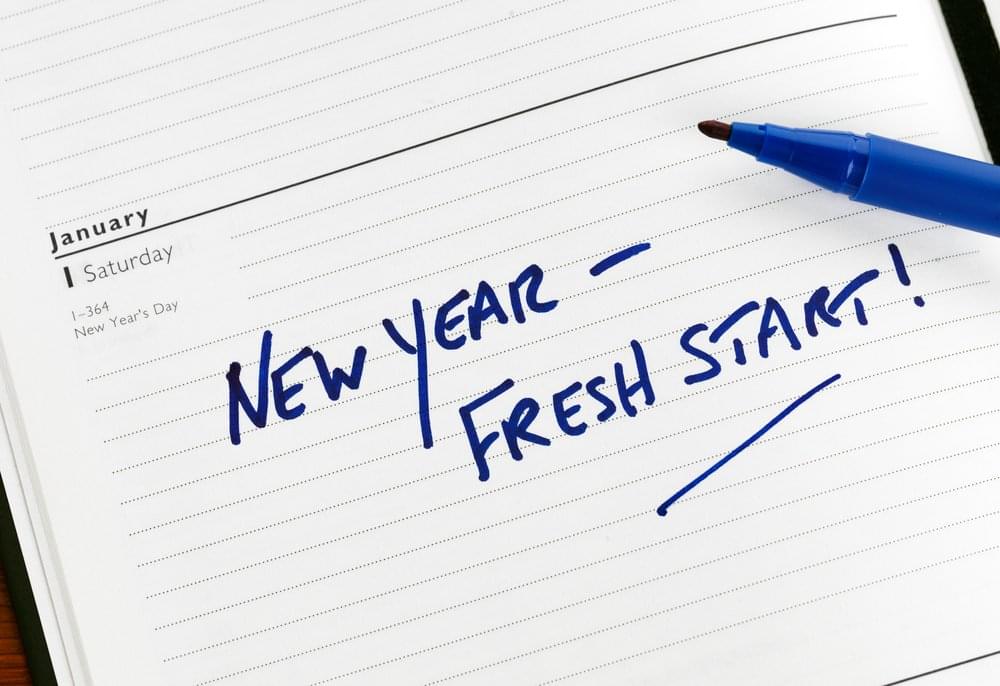 According to a new survey carried out by CV-Library.co.uk, 7.7 million British employees will resolve to leave their job in 2016 and find a new role – that’s one quarter of the current 31.2 million workers in the UK.

What’s more, the report also found that vowing to go to the gym has been seemingly replaced with more work-related hopes as 54% of the 3,300 employees surveyed claimed they planned to make a job-related promise.

46% admitted they were ready for a new job in 2016, which is hardly surprising since almost one third of workers questioned said they return to work after the Christmas holidays feeling unhappy about their employment.

Lee Biggins, Founder and Managing Director of CV-Library, explained what these results could mean for the UK jobs market. He said: “Businesses need to be prepared to pull out all the stops in 2016. They’ll need to work hard to hold on to talented employees, as well as fighting to draw in the best new candidates. With workers choosing to leave their jobs in 2016 in the knowledge that they hold all the cards, employers have a challenge ahead of them when it comes to January. However, ensuring that workers feel valued and supported is a good place to start.”

This is the Best Recruitment Firm to Work For 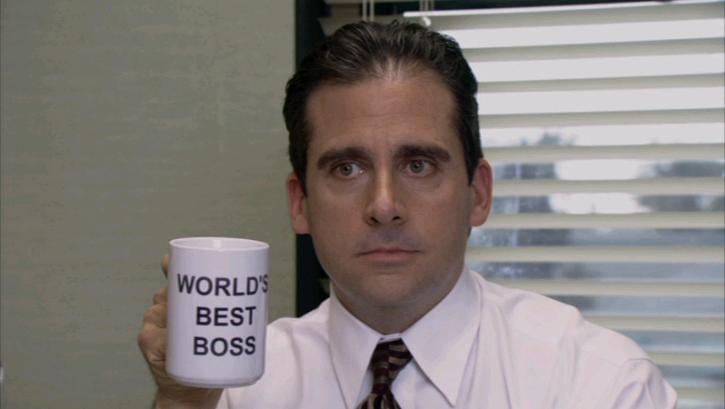 Glasgow based Search Consultancy has won ‘Best Company to Work For’ (over 250 employees) at the Institute of Recruitment Professionals (IRP) Awards.

Grahame Caswell, CEO of Search Consultancy, says: “The IRP Awards recognise companies whose work sets the bar for other recruitment professionals to aspire to, so it is a huge honour for us to win this accolade. We were proud to earn this title in 2013 and over the last two years we have taken further steps to create a truly inspirational working environment for our exceptional workforce. To be recognised yet again is testament to our ongoing commitment to excellence, corporate success and professionalism.”

The win the award, companies must demonstrate that staff motivation is at the heart of their business. Search has a multitude of initiatives such as; on-the-job coaching, informal face-to-face briefings from the CEO, health and wellbeing initiatives, and employee incentive schemes.

If Carlsberg did Job Interviews they’d… oh wait, they have!

At the beginning of December, Carlsberg launched it’s ‘Probably the Best Job in the World’ campaign. The successful applicant would be a beer taster and brand ambassador for four hours, with a wage of $10,000 (£6,688) for the day.

The quintet were put to task in front of a four-person panel where they first had to do a blind taste test, where they had to spot the Carlsberg amongst the other beers. They then had to improvise ‘wedding vows’ to demonstrate their love for Carlsberg. Finally, they had to sell the brand to a crowd of difficult customers.

Jimmy Toh, Carlsberg’s Singapore General Manager, said: “The five finalists are very special in their own way – they are creative, spontaneous and hold conversations very well.

“The decision was a little bit difficult when we tried to fit the contestants to the Carlsberg brand, but in the end we felt that Daniel [Osgodby] was the closest fit. He really exemplified the brand and he has reasonably sound knowledge of beers. He even got all the beer brands in the taste test correct by taste alone.”

Osgodby had this to say about Carlsberg’s hiring methods: “I honestly think that it was the best interview in the world.

“More companies should do interview processes like this – everyone having some beer together and a conversation, it’s the best way to go.”

According to a new report released by Barclays Lifeskills, there are a number of mistakes that employees make during interviews that recruiters are getting tired of seeing. The results (taken from a survey of 500 recruiters) revealed the ten most common mistakes candidates make during a job interview.

Is this the Weirdest Recruitment Firm EVER?! 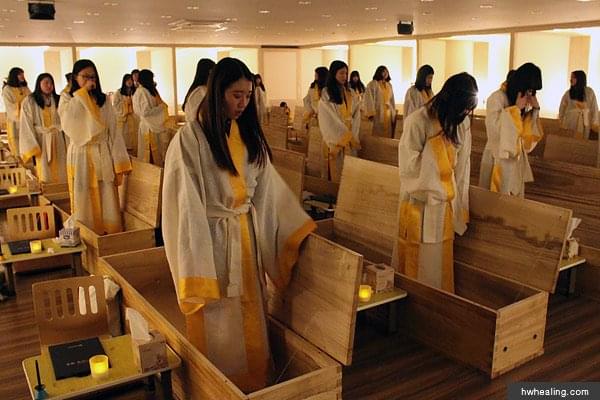 Prepare to be pretty damn freaked out, because one South Korean recruitment firm (Staffs) has just revealed what may be the most extreme, macabre, and just plain odd stunt ever pulled by an employer to boost staff morale.

South Korea has one of the highest suicide rates in the world, a fact that Staffs’ president, Park Chun-Woong, felt needed addressing in his company. So in an effort to improve morale and ensure his employees would start enjoying life, Chun-Woong had his employees stage their own funerals.

“Our company has always encouraged employees to change their old ways of thinking, but it was hard to bring out any real difference,” Chun-Woong told the BBC.

The “bonding exercise” took place in the company office where staff were told to dress in white robes, write final letters to their loved ones (an exercise that made several of the workers burst out in tears), before stepping inside coffins laid out for them on the office floor.

Once they lay down in the wooden boxes, hugging pictures of themselves, a man dressed in black, representing the Angel of Death, banged the coffins shut, leaving the staff members to think about their lives in the dark.

Before the fake funerals, the employees had been shown videos of people overcoming disabilities like being born without limbs or fighting cancer but still making the most of the time they had left.

Chun-Woong continued: “I thought going inside a coffin would be such a shocking experience it would completely reset their minds for a completely fresh start in their attitudes.”

And the stunt may have worked! Cho Yong-tae is one of the employees who went through with the fake funeral. He told the BBC: “After the coffin experience, I realised I should try to live a new style of life. I’ve realised I’ve made lots of mistakes. I hope to be more passionate in all the work I do and spend more time with my family.”

Outside getting their staff to endure their own funerals, Staffs also ensures that its staff members don’t become a part of the country’s tragic suicide statistics, by doing stretching exercises together every morning, the BBC reports. An exercises which culminate in a joint outburst of laughter.

“At first, laughing together felt really awkward and I wondered what good it could do,” one woman told the BBC. “But once you start laughing, you can’t help but look at the faces of your colleagues around you and you end up laughing together.”