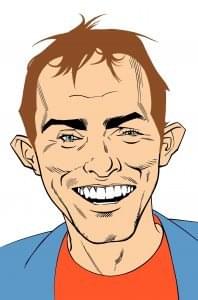 Jonathan Campbell, in the flesh

This blog originally appeared here, on Dara Lawlor’s blog. Dara interviewed our founder, Jonathan, this week about how Social Talent came in to being, and why recruitment has changed for the better.

In 2008 Jonathan Campbell returned to Ireland following a stint heading up an international recruitment firm based in the Cayman Islands. He’d worked as a recruiter for his entire 14 year career and had agreed to set up Select People, an offshore recruitment firm, with Corkman  Vincent O’Donoghue. A month after they started Lehman Brothers collapsed and six months later their business was on the verge of going under.

They took remedial action, cut sponsorships and subscriptions to job boards, and stopped advertising in the local press.  They discovered that the only jobs that companies were willing to pay a fee for were those that were very difficult to fill. Candidates for these roles were unlikely to use job boards or respond to newspaper ads.

Out of necessity Campbell, who has always had a keen interest in technology, started to experiment with LinkedIn and bit by bit he learned to find candidates using online technologies.

The economy forced us to change and we changed.  All of a sudden we realised that this worked.  We didn’t need our own database, we didn’t need to advertise, there was more than enough information online to help us to network, get a lead, and find somebody for a job.  We started making placements and we started surviving.

If things hadn’t gone south in 2008 do you think you would still be doing what you were doing?

And you wouldn’t have eventually moved towards social recruiting?

No, I wouldn’t have needed to.  I may have dabbled in it perhaps but most recruiters and most business that are making money don’t change.  They’ll usually wait for something or someone to kick them in the arse.

You’re spending more time training other companies on how to use online technologies to recruit than actually recruiting.  How did that happen?

I enjoy networking and at various events and meetings I started telling other recruiters what we were doing as a business. They listened to us because as an Irish company not recruiting in Ireland, and focusing only on the offshore market, they felt we weren’t a threat. At the time most of the agencies we were talking to were either letting staff go or closing down. The market shrunk by 60% in Ireland alone during 2008 /2009.

As they realised that what we were doing was working they asked us to teach them how to do it. When you’re a recruiter and running your own business you don’t have time to do anything else but place candidates.

In 2008 if someone had shown us how to do this as opposed to slowly learning over 2 years and making loads of mistakes before we finally got it right we’d have happily paid money for it.  In the end it was obvious that there was a business in training others how to use online tools to recruit and we decided to create Social Talent.

What is social recruiting?

2. Using the same online tools to brand and build an awareness of yourself as a recruiter within a market or niche so that you are known as the go to guy for legal jobs in say Toronto.

Previously most of that stuff would have been outsourced, you would have to slowly build your own database, or you would have had to hire your own marketing person. These were the kind of things that only rich companies could afford.

Social is the buzzword or catch all phrase  that is thrown about, but along with using LinkedIn, Facebook, and Twitter social recruiting also involves using webinar software, improving how email is used, better document storage, and better marketing techniques.

Are the days of traditional agency recruitment over?

No they’re not.  Mass advertising and marketing methods to attract candidates no longer work.  They have been on the wane over the last decade.  Putting an ad online gets applicants but the wrong ones.  In fact if you put an ad in a newspaper there’s a good chance you won’t get anyone.

10 years ago newspaper recruitment advertising died and we all moved to job boards.  Anybody could put an ad on a job board so agency clients all of a sudden could go to the exact same source, pay the same fee, and get the same candidates coming to them.  The benefit of an agency is not just the supply of those candidates.  It’s the supply of the right candidate at the right time, vetted with authority, and it’s also the networking that that person does in the industry and the knowledge that person builds up on that industry.

The big threat to the recruitment agency model at the moment is LinkedIn.   LinkedIn view agencies as a competitor.  They offer a completely different product set to corporates and have no interest in the agency model.  They sell services to agencies by telling them that they can save agency fees by doing it themselves.

The problem is that as an in-house recruiter who has to recruit sales, legal, technology, and engineering people, having a million names doesn’t get the perfect shortlist of five people who will come and interview with you, and crucially the one person who is going to take that job.  The recruiter’s job is to disseminate down to that perfect shortlist, knowing who to look for, knowing the skills, and the right questions to ask.  Those fundamentals aren’t going to go away and will still be here in twenty years’ time.

What are your views on social media and privacy?

Privacy on the web is a myth. You can modify your Facebook or Twitter settings as much as you like but someone out there will always find a way to bypass them and get your data. Rather than worrying about your privacy you should be worrying about the quality of the information that’s online. If you have a Facebook profile that only shows you drunk at the weekend that’s your choice but make sure you also show photos of you in a business context and include information about your success at work. When someone does eventually find your drunken photos they will hopefully be only a tiny part of your overall digital profile, the majority of which is you being a really good professional talking about what you do and networking within your industry. I see online profiling as an opportunity and privacy is a myth.

Even if you don’t have an online profile?

Everybody has an online profile whether they like it or not. A friend of mine who doesn’t have a Facebook account and barely returns texts wagered me that I couldn’t find him online. I found his photograph online on a trade magazine website.  He was at a golfing event with one of his clients. bHis name, job title, and employer were listed at the bottom of the photo. That’s enough for me as a recruiter to say that’s a guy who could do this job as his title is right, his industry is right, and I know his name. That’s enough for me to track him down, contact him, and ask him if he’s interested in the job.  So whether you like it or not you are online, your profile is out there.

Ireland infrastructurally isn’t bad but it needs a big improvement in the area of wireless access to the internet. It’s not as ubiquitous as it should be. People should be able to get high speed access to the internet everywhere in Dublin. Time magazine cited it as the one big let-down of Dublin as a city to visit.

Otherwise Ireland is fantastic. We have a bustling venture capital sector that we never had before and Dublin is almost unique among European cities in that it has this culture. Some of the world’s most successful business people now have venture capital operations based in Cork, Kerry, or Dublin and are willing to invest heavily in Irish companies that could be the next big start up.

It’s the home of Facebook, LinkedIn, Google, Twitter, PayPal, and Microsoft. You can rub shoulders with senior executives from these companies at local conferences; people that you would usually only be able to rub shoulders with in Silicon Valley. In fact it’s the Silicon Valley of Europe. On Monday we met with an organisation about funding our international expansion. We were able to have an informal chat over coffee with three successful entrepreneurs who gladly gave us great advice for free.  You can’t do that in many other European cities.

That’s a different take on the landscape to what we’re fed by the media.

The newspapers are always talking about what the government are doing. Who cares what the government are doing. It’s what people are doing that matters. Who can we talk to? What knowledge can we get? You can do more yourself because you can talk to somebody who has set up a ‚¬200m company from scratch who’s the same age as you over a pint of Guinness. You don’t get that anywhere else.  There are loads of these people in Dublin.

Any views on the recent Netflix launch?

It’s great that for ‚¬6.99 a month you can theoretically watch unlimited movies and TV shows. It’s a low enough price for people who usually illegally download movies to pay out. Ill happily pay it and feel comfortable that I’m not infringing any copyright law.

I strongly object to having to give out my credit card details for the free trial. I don’t like giving out my credit card details unless I’m definitely paying for something. Also they have very poor content on the site. I went on the other night and found a load of 8 year old movies. If you are going to launch a product you have to make sure it’s ready and offer the best service possible. It’s a missed opportunity as many people won’t come back to the site for another year because of the poor content.

What are you listening to at the moment?

I listen to very fast dance music ‚¬€œ HedKandi compilations and anything by Groove Armada ‚¬€œ when I’m working, which drives my colleagues up the wall. Florence and the Machine’s new album, Ceremonials, is excellent and I love Wasting Light by the Foo Fighters.

I’m reading Free by Chris Anderson. Meatball Sundae by Seth Godin is dated but it blew my mind. It took a recession for people to take notice that marketing has changed irrevocably.

I’ve just finished the first series of Homeland which was great. I thought Drive was fantastic, very artistic looking with a great soundtrack.